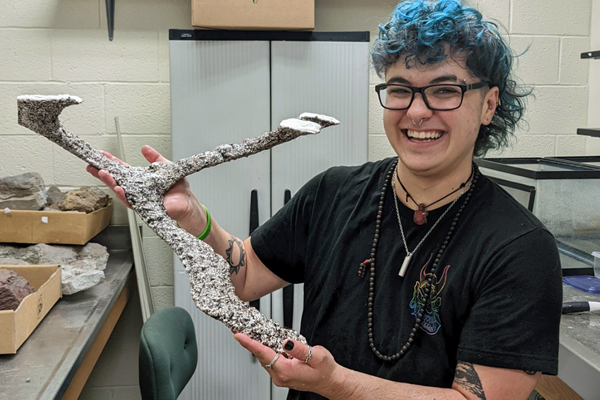 Geological Sciences graduate student Skyler Houser spent the summer in Clippinger Laboratories, studying how three different types of scorpions make burrows so that he could compare the modern-day arthropods with their fossilized relatives.

“The most interesting thing to me has been actually observing the scorpions excavate and start their burrows and seeing how they excavate differently depending on if they’re arid or tropical,” Houser said. “Also seeing just how quickly they can make burrows is amazing to me. They can go from a blank slate to having a decent burrow literally overnight,” Houser said.

“Honestly, I love everything about these scorpions. I knew very little about scorpions when I picked them for my research animals, but I’ve loved learning about their anatomy and behavior over the past year,” he added.

Houser, entering his second year in the M.S. in Geological Sciences program, has been conducting a laboratory investigation of the burrowing behaviors and burrows of three species of scorpions— Heterometrus spinifer from southeast Asia, Pandinus viatoris from southern Africa, and Paravaejovis spinigerus from western North America—in order to better evaluate the origin of fossil burrows (or trace fossils) in the geologic record. Houser is working with Professor Dan Hembree, now at the University of Tennessee-Knoxville.

Studying extant burrowers is vital for trace fossil interpretation and is part of a field of study called neoichnology.

"Many scorpions are known to burrow, but despite having existed since the Silurian (more than 400 million years ago), they have a poor trace fossil record likely due to a lack of understanding of modern scorpion traces," Houser explained.

The three species of scorpions selected for this study are from different environments and geographic regions so that variations in burrow form based on environmental conditions and evolutionary distance can be evaluated.

Over the summer, Houser conducted three different experiments with 10 scorpions of each species. Each scorpion was placed in a large, soil-filled aquarium first modeled after its natural conditions, then with lowered and elevated soil moisture, and then with lowered and elevated sand content. These variations in soil conditions were used to determine the effects of different environmental stresses on the scorpions burrowing behavior and burrow morphology. At the end of each experiment, the scorpions were removed and the burrows were cast in plaster for description and analysis.

Houser is now working on analyzing and comparing the different burrow forms of the scorpions and presented the results of his work at the 2022 Geological Society of America Annual Meeting in Denver, Colorado, in October. His presentation was Neoichnology of Tropical and Arid Burrowing Scorpions: Environmental Impacts on Burrow Construction and Form.

Houser said his career plans include possibly pursuing a Ph.D. some day, but "after graduation, I'd like to get a job working in a museum or zoo or invertebrate research place. My research has definitely helped me learn how to be organized and also really fostered an admiration and passion for invertebrates, even the ones people find unsavory. This definitely isn't what I thought I'd do in grad school, but it's been the most wonderful surprise."

Houser said he's done working with the scorpions in the lab but noted, "I have five scorpions I now keep as pets in my apartment. The remaining ones were just taken this past weekend to UTK where Dan Hembree will continue to care for them and possibly get some more research out of them."

"They'll definitely be my first sort of unconventional pet. I previously had only two cats, but fortunately I've gotten pretty good at scorpion care. Also, because I'm 'that person,' I'd also like to make the PSA that they're not insects, they're arachnids," Houser said.