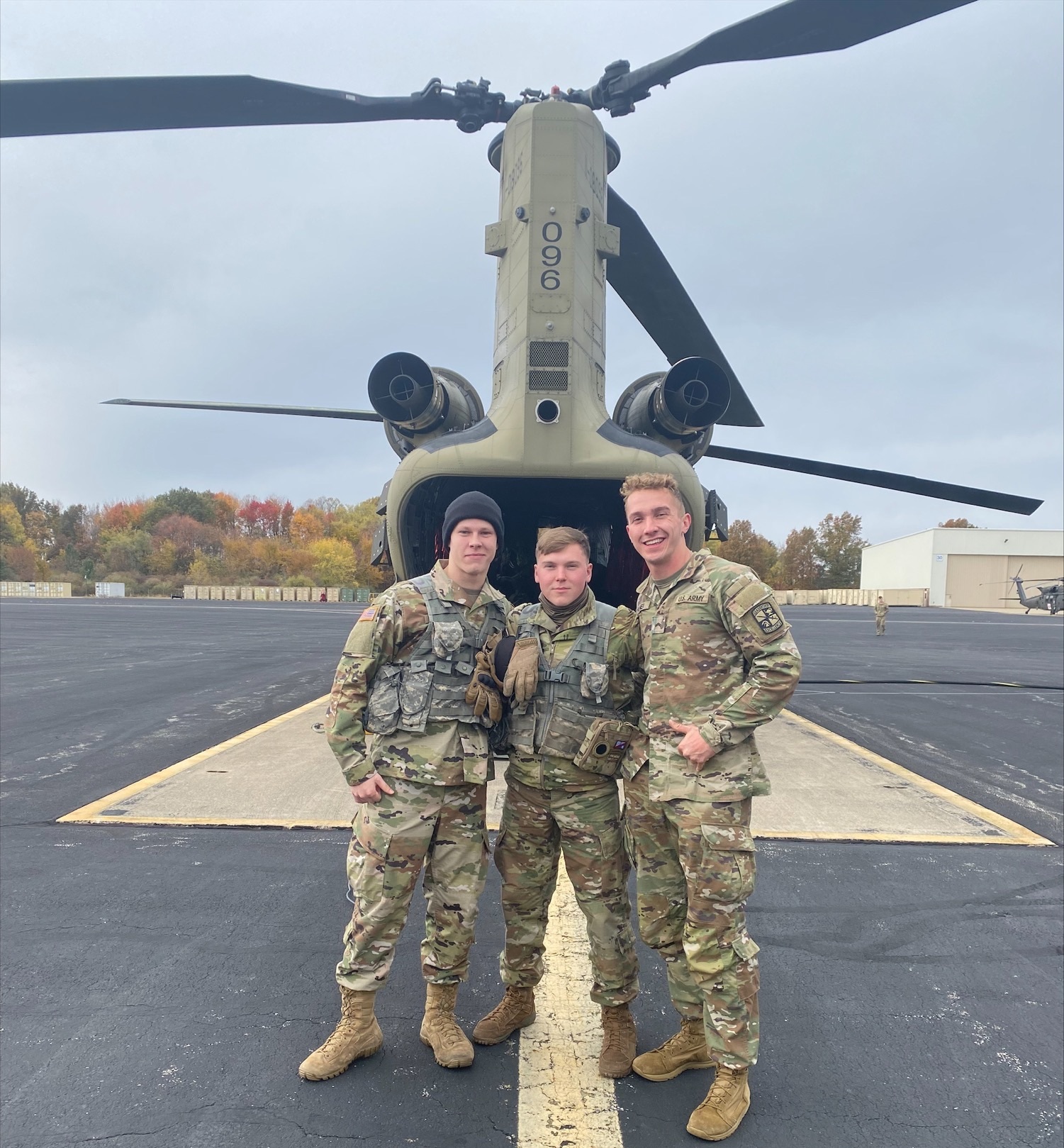 For Ohio University Army ROTC cadets, learning happens in many places, from traditional classrooms to military bases, hospitals, and training facilities in Ohio and sometimes beyond its borders.

Experiential learning is a key feature of the Ohio University experience, helping students learn through authentic experiences and preparing them not only for meaningful careers but active participation in their communities. Army ROTC cadets gain practical skills and leadership experience in their classrooms, through internships and deployments, and by helping to facilitate programming for younger cadets.

During the weekend of Oct. 20-23, 2022, Ohio University’s Army ROTC cadets donned their uniforms, packed their bags, and headed into the woods for field training in Ravenna, Ohio at the Camp James A. Garfield Joint Military Training Center, an Ohio National Guard training site.

Part of OHIO’s Bobcat Battalion traveled to field training via two CH-47 Chinook helicopters, while the rest of the group followed in buses.

Each fall senior cadets of the Bobcat Battalion plan and execute a field training exercise, which allows younger cadets to utilize skills they have learned from their military science classes and leadership labs throughout the semester.

As part of the training exercises, the OHIO ROTC cadets participated in land navigational skill testing and marksmanship qualification, planned and executed patrol missions, and tested their skills on the Field Leader’s Reaction Course (obstacle course).

Phipps said he was proud of how well the cadets of the Bobcat Battalion performed on the new U.S. Army qualification course (a pop-up range that tests marksmanship) and in their land navigation exercises which require cadets to hone their map reading skills and find points using their navigation tools.

“We have the ability every week to go out and do training like what we did for Fall Training Exercise, but during a three-hour lab that's right next door,” Ander T. Wehner said. “It really helps us to be extremely prepared.”

Jon Kushman, a first-year business analytics major from Milford, Ohio said the recent field training represented an opportunity to put everything the cadets have been learning in their military science classes and labs into practice.

Getting to fly in a Chinook helicopter was a highlight of the trip for Kushman, along with getting to shadow lead cadets during training.

In addition to providing an opportunity for all cadets to put their skills to the test, Fall Training Exercises also help prepare junior cadets for the Advanced Training they will participate in this summer.

Psychology and East Asian studies major Ander T. Wehner is one of the juniors preparing to participate in Advanced Camp. Along with other junior cadets, he served as a platoon leader, providing direction and guidance for a group of cadets during a practice reconnaissance mission.

Wehner came to OHIO from Howell, New Jersey, choosing Ohio University because he liked what he learned about the ROTC program at OHIO. He said ROTC cadets benefit from having access to outdoor training facilities at the Ridges.

“We have the ability every week to go out and do training like what we did for Fall Training Exercise, but during a three-hour lab that's right next door,” Wehner said. “It really helps us to be extremely prepared.”

Last summer Wehner traveled to Taiwan as part of the U.S. Army Project GO (Global Officer) program which enabled him to continue his study of the Chinses language and learn different cultural perspectives.

Wehner participates in the Simultaneous Membership Program which provides cadets who enroll simultaneously in ROTC and the Army National Guard with a monthly stipend in addition to full tuition benefits. His National Guard Unit is based in Tiffin, Ohio.

He enjoys the closeness and camaraderie he found in the Bobcat Battalion.

“We all live together,” said Wehner. “We all go to PT (physical training) together every morning. We go to lab together every Wednesday. We go to class together, and then we all come back home and we all live in the same hallway. So that builds a lot of community among us. And I think that's one of my favorite things.”

From seniors to first-year students, cadets had the opportunity to learn and lead at their Fall Training Exercise.

“I was able to shadow the lead person and actually see what goes on behind the scenes with the planning and executing of operations,” Kushman said.

In addition to gaining skills and experience that prepare them for leadership roles, ROTC cadets apply the skills and lessons learned in the Bobcat Battalion to their academic life.

Phipps said he puts the leadership and collaboration skills he has learned as an Army ROTC cadet to work facilitating collaboration in group projects for his classes.

Military service runs in the family for Phipps whose father served in the U.S. Army and is a graduate of Ohio University. Phipps said he was always interested in joining the Army. When he visited OHIO and set foot on College Green, he knew OHIO was the place for him. A global studies-Europe major and president of the OHIO Global Studies Union, Phipps will commission as a U.S. Army officer when he graduates this spring.

Kushman also has always wanted to join the military. He participated in Junior Reserve Officer Training Corps (JROTC) during high school, earning a scholarship through his involvement at that level. Rather than enlisting out of high school, Kushman followed the advice of his parents and teachers and joined ROTC. With the recommendation of an ROTC graduate from his high school, and because of the strong reputation of OHIO’s ROTC program, he chose Ohio University.

Along with 10 other cadets, Kushman represented OHIO’s Bobcat Battalion at the annual Bold Warrior Competition recently at Fort Knox in Kentucky. He said participating in ROTC has helped him develop time management skills and assertiveness.