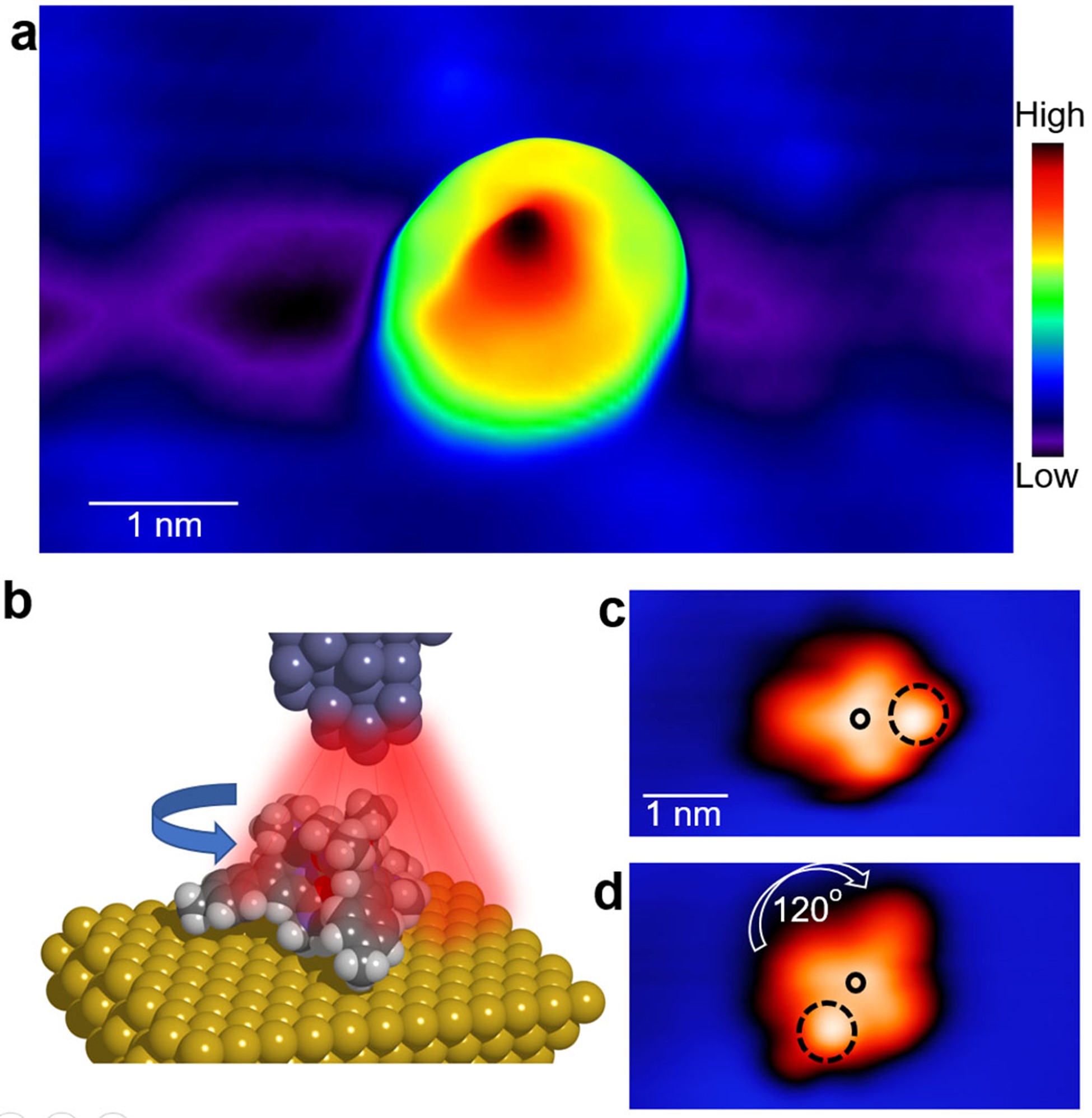 Saw Wai Hla/Ohio University Fig. Rare-Earth Rotor. (a) STM image of a rotating Eu complex appears as a disc shape on Au(111). (b) Controlled rotations are performed by supplying electrical energy from an STM tip. (c), (d) Before and after rotation of a complex, respectively. The dashed circle indicates the counterion used for the control.

Scientists at Ohio University, Argonne National Laboratory, and the University of Illinois at Chicago have, for the first time, formed a charged rare earth molecule on a metal surface and rotated it — both clockwise and counterclockwise without affecting its charge — using scanning tunneling microscopy.

Their work opens a new window for research on the atomic-scale manipulation of materials important to the future, from quantum computing to consumer electronics.

"Rare earth elements are vital for high-technological applications including cell phones, HDTVs, and more. This is the first-time formation of rare-earth complexes with positive and negative charges on a metal surface and also the first-time demonstration of atomic-level control over their rotation," said team lead Saw-Wai Hla, who has dual appointments as a scientist at Argonne and professor of physics and astronomy in the College of Arts and Sciences at Ohio University.

The experiment was conducted both at Argonne and Ohio University using two separate low-temperature scanning tunneling microscopy (STM) systems. The environment for STM experiments requires a temperature of about 5 degrees K (-450 degrees Fahrenheit) in an ultrahigh vacuum. The sample molecule sizes are about 2 nanometers.

"The same results were achieved in both locations, which ensures reproducibility," Hla said. The Ohio lab is operated by students of the Hla group associated with the Nanoscale & Quantum Phenomena Institute.

The scientists’ article, "Atomically Precise Control of Rotational Dynamics in Charged Rare-Earth Complexes on a Metal Surface," describes atomic-scale control of rotation of Rare-Earth complexes on a surface and is published in Nature Communications.

The rare-earth complexes the researchers assembled were positively charged Europium base molecules with negatively charged counterions on a gold surface. Rotations of the complexes resulted from applying electric field emanating from the STM tip, using the counterion underneath as a pivot. The researchers demonstrated 100% directional control over the rotation of these rare-earth complexes.

Eric Masson, professor and Roenigk Chair of Chemistry at Ohio University and one of the co-investigators of the project designed the rare-earth complexes, and his group at Ohio University synthesized them. Density functional theory calculations were performed by scientists at Argonne and the group of Anh Ngo, an associate professor of Chemical Engineering at the University of Illinois at Chicago, using Argonne’s BEBOP, the most powerful supercomputer in the United States to date. The calculations unveil only negligible amount of charge transfer at the molecule-substrate interface, which means the complexes remained charged on the surface.

The chemical state of the Eu ion in the complexes adsorbed on the surface is determined by a nascent experimental method known as synchrotron X-rays scanning tunneling microscopy at the Advanced Photon Source in Argonne by Hla and co-workers, where they confirm that the molecules are positively charged on the gold surface. STM images show the structure as a distorted triangular shape with three arms. The incorporation of the counterion underneath is proved by an STM movie acquired with a record number of 8,000 spectroscopic frames. Then the Hla group used STM manipulation to further demonstrate the control rotation, which shows clockwise and counterclockwise rotations at will.

"These findings may be useful for the development of nanomechanical devices where the individual units in the complex are designed to control, promote, or restrict motion," Hla said. "We have demonstrated the rotation of charged rare-earth complexes on a metal surface, which now enables investigations one-complex-at-a-time for their electronic and structural as well as mechanical properties."

This work was funded by the U.S. Department of Energy, Office of Science, Office of Basic Energy Sciences, Materials Science and Engineering Division