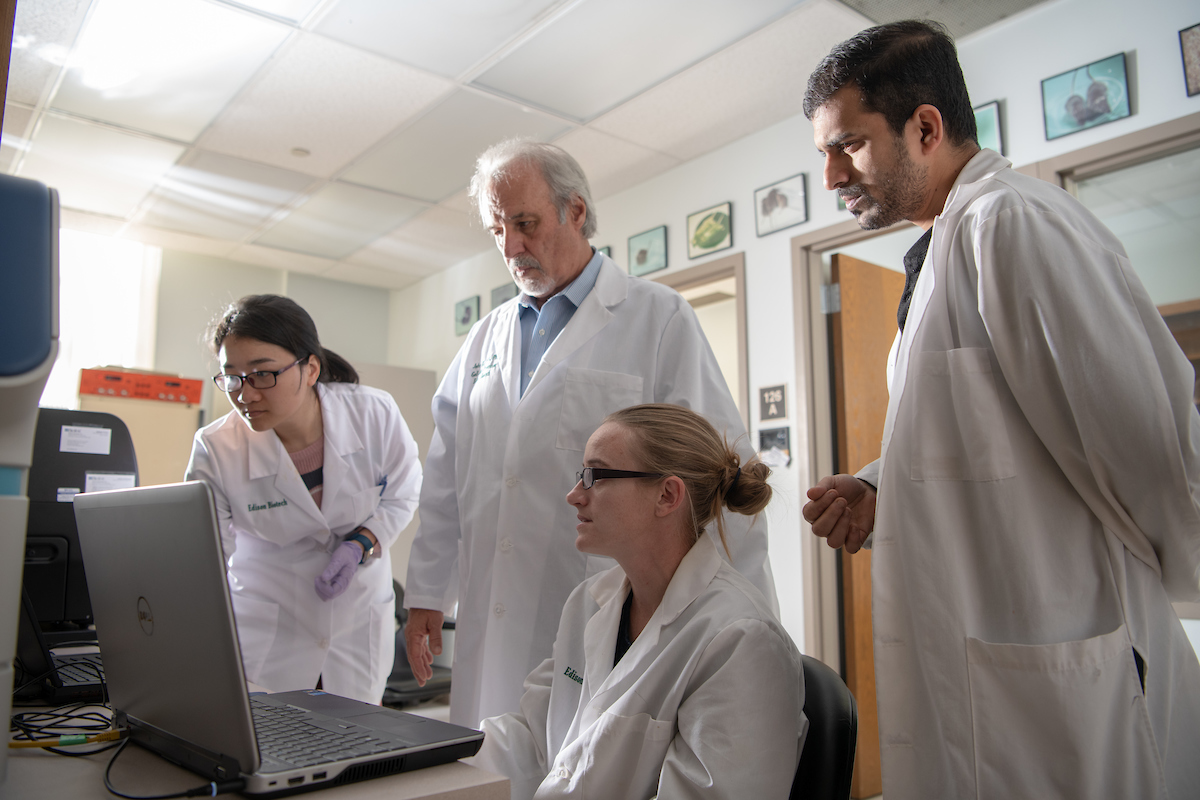 A study of mice led by Ohio University Heritage College of Osteopathic Medicine and Edison Biotechnology Institute researchers has shown that stopping the activity of growth hormone (GH) in fat cells can improve health and increase lifespan.

Growth hormone is best known for regulating growth; however, its presence has both beneficial and detrimental effects. It is found in many tissues in the body and plays an important role in numerous biological functions including aging.

The concept for the study was inspired in part by a mouse that set a record for being the longest-lived in a laboratory. This long-lived mouse has no growth hormone action in any cell or tissue, resulting in mice that were small in size and obese but with a much longer lifespan than typical laboratory mice. Investigators wanted to see if selectively removing GH receptor from fat cells (adipocytes), rather than entirely removing it from the body, would retain the beneficial aspects of GH insensitivity while limiting the more harmful effects.

“This study expands our knowledge about the action of GH and how it can specifically impact different tissues with different physiological outcomes,” said John Kopchick, Ph.D., who collaborated on the study with Ohio University investigators Edward List, Ph.D., and Darlene Berryman, Ph.D., along with researchers at Dalhousie University in Nova Scotia. “Although in this study the mice have increased fat, they were metabolically healthy and lived longer than control littermates, meaning that we can apply this to our own lives helping the general public understand that not all fat is bad fat.”

The results, which were recently published in the journal, Endocrinology, where it received the distinction of a Featured Article,  showed that disrupting the growth hormone receptor (GHR) gene in fat cells improved insulin sensitivity at an advanced age and increased lifespan in male mice. The mice also had increased fat mass, reduced circulating levels of insulin, C-peptide, adiponectin, resistin, and improved frailty scores with increased grip strength at advanced ages. The researchers found that approximately 23% lifespan extension in male mice that have no GH action is due to GHR disruption in fat cells. In a previous report, they determined that approximately 19% of the lifespan extension is due to GH action in muscle, and that females benefited less from GHR disruption.

The study was conceived as investigators considered a line of mice developed in Kopchick’s lab here at Ohio University that has been used for more than 25 years to study healthy aging. This line of mice, called growth hormone receptor knockout (GHRKO) mice, have no GH action in their bodies. They live longer, have enhanced insulin sensitivity and are protected from multiple age-related diseases.

“In fact, this mouse, which is completely GH insensitive because it lacks the receptor for GH (GHR), holds the record for the longest-lived laboratory mouse, living one week shy of five years versus control mice, which live about two to two and a half years,” List said. “We also know that GH acts on fat cells so we wanted to find out what happens if we take away GHR only in these cells while leaving GHR intact in all other cells and tissues.”

After removing the GH receptor in adipocytes in mice, the investigators allowed the mice to live normally and analyzed if the alteration impacted their metabolism and lifespan, looking at adiposity, cytokines/adipokines, glucose homeostasis, frailty, and lifespan in aging mice of both sexes.

According to the study, the data demonstrate that removal of GH’s action, even in a single tissue, is sufficient for observable health benefits that promote long-term health, reduce frailty, and increase longevity.

“This study is important because it tells us that some of the not-so-beneficial health effects of GH occur in adipose tissue and that GH is not an anti-aging drug; if anything it promotes aging,” List said.

List is an associate investigator in the Edison Biotechnology Institute (EBI), alongside Kopchick, who leads the EBI as principal investigator. Kopchick is also a Goll-Ohio Eminent Scholar and professor of Molecular Biology. His research focuses on human and animal GH and the molecular biology of GH in relation to growth, obesity, insulin resistance, diabetes, cancer and aging. He is also the founder of the drug SOMAVERT, a GH antagonist which is used to treat acromegaly, a growth disorder marked by excessive levels of hGH that results in enlargement of the hands and feet, facial disfiguration,  multiple organ disorders, and premature death if left untreated.

Berryman is associate dean of Research and Innovation and a professor of Biomedical Sciences. Her research focuses on obesity and assessing the nutritional and hormonal factors that impact adipose (fat) tissue and influence risk of obesity, as well as associated diseases. She investigates how GH levels and diets with various macronutrient profiles impact adipose tissue distribution, metabolism, and function, as well as progression of obesity to over diabetes.

In addition to List, Berryman, and Kopchick, Silvana Duran Ortiz, a post-doctoral researcher with the Edison Biotechnology Institute, and Kevin Funk, a Ph.D. student in OHIO’s College of Arts and Sciences, are also coauthors on the study.