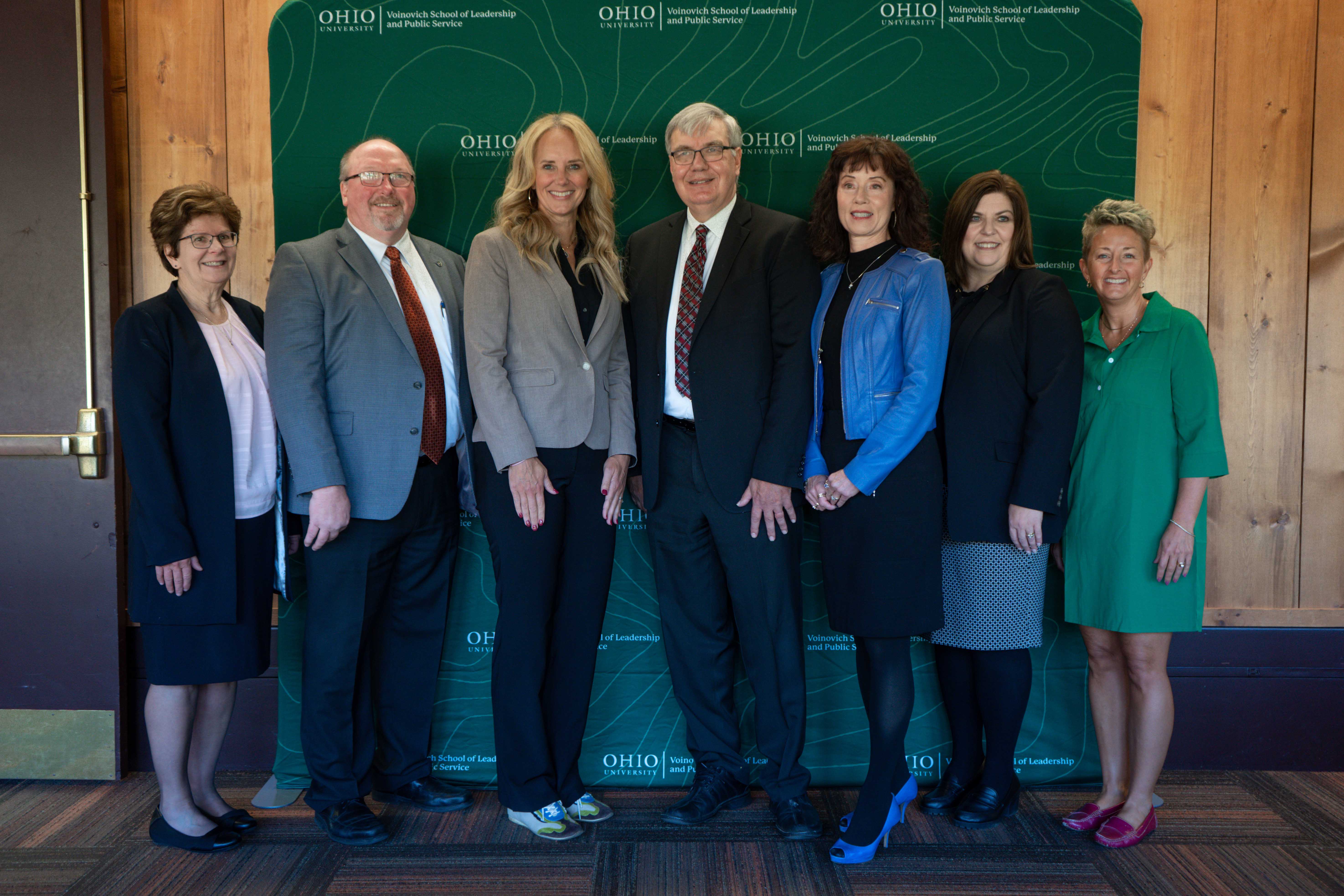 The Voinovich School of Leadership and Public Service at Ohio University held its second annual Appalachia Forward conference on Oct. 5, bringing together local elected officials and development staff to discuss planning, funding, and transformative change for the Appalachian region.

The conference was held at Shawnee Lodge and Conference Center and was also livestreamed.

Amista Lipot, director of external relations and executive director of the Mayors' Partnership for Progress at the Voinovich School, was the emcee for Appalachia Forward. In her opening remarks, she shared the phrase she thinks of every day: “What got me here today will not get me there tomorrow.”

Lipot’s motivational phrase set the stage for the event’s panels, providing learning opportunities for everyone involved.

Lydia Mihalik, director of the Ohio Department of Development, in her opening remarks, described the various, exciting investments intended to uplift Appalachia, with an overall purpose to assist each of the Appalachian communities in reaching their goals.

“Ohio has so many incredible places to call home, we have so many diverse landscapes,” Mihalik said. “But to unlock the potential of every corner of our state, the DeWine-Husted administration is following through on that commitment to invest in Ohio’s communities, and that includes all 32 counties in Appalachia here in Ohio.”

The conference consisted of three panels, each of which covered various issues pertaining to members of local Appalachian governments, such as development, sustainability, revitalization, and tourism.

John Carey, director of the Governor’s Office of Appalachia, said the importance of the event was to learn from one another and recognize the impact of collaboration.

“Take this opportunity to network,” Carey said in his opening remarks. “You want to talk to the people in other counties who may be doing something that you could learn from and I’m sure they could learn things from you. Sometimes we don’t realize the value of things we’re doing because we’re just doing it. But sharing your experiences and your challenges can be really helpful as you think about this historic opportunity.”

Jessie Powers, the executive director of Bailey’s Trail System, described the organization’s overall value as “sustainable outdoor recreation diversifies rural economies.” In following this value, Powers described the trail system’s 88-mile mountain bike trail in the Wayne National Forest and the holistic approach to the development of this trail system.

Dylan Sayre, trails coordinator of the Muskingum Watershed Conservancy District, spoke about the district’s blueprint for its trail maintenance, renovation, and overall development. Sayre mentioned current plans to put in a campground and a multi-use trail system in the area.

The panel shared a video of its “river of opportunity,” which showed the project on the Mahoney River, removing its nine dams. Overall, the panel discussed its desire to connect its downtown areas to its outdoor recreations.

Misty Wells, mayor of the village of Caldwell, and Gwynn Stewart, educator with the Community Development OSU Extension, discussed their plans for downtown revitalization.

Wells said that in her plans to reinvigorate Caldwell, she focused on improving quality of life. In projects such as “A Village Christmas to Remember,” Wells said it brought the community together to invest in the downtown projects and that “everything we’re doing, it has brought so many people into our town.”

Stewart mentioned the OSU first impressions program, which gave insight to the current perspectives of residents and tourists of the area to aid in the development of revitalization plans, which included historic preservation, parking enhancements and trails.

Also among the Downtown Revitalization session presenters was Luke Feeney, mayor of Chillicothe, who described downtown as a “shared community space” and emphasized that the city should be a partner in downtown projects.

Additionally, Lance Willard, city manager of the city of Columbiana, discussed transforming Main Street into a destination spot, with inclusions such as festivals, food trucks and music to liven up the city life and integrate the outdoor areas with the community.

The third and final panel focused on tourism, with presenters discussing studies on tourism in the region and how to increase overall exposure of Appalachia to outside viewers.

Jessica Keeton, economic development coordinator at the Ohio Valley Regional Development Council, shared data from a Tourism Impact Study, which showed a large increase in outdoor recreation interest and how growth potential could be maximized for this rising community.

“We continue to preserve and promote our history and culture,” Keeton said. “I didn't even know all the underground railroad sites that we have, and (the history) is just incredible.”

Kennedy Blakley, communications manager at Ohio Mid-Eastern Governments Association, presented her information regarding World Heritage Sites, and the efforts in progress to have sites in the Appalachian Ohio region be considered by the UNESCO World Heritage Committee.

Karen Raymore, CDMA, executive director of the Hocking Hills Tourism Association, spoke about the taxes and jobs generated by tourism. Raymore said the challenge for these organizations is to balance the preservation of the sites with increasing consumer demand. Raymore stated that while the tourists are impactful, “Your residents are your number one customers.”

After the conclusion of the panels, the event pivoted to discuss the forthcoming Appalachian Community Grants Program to inform the local officials and development staff on the contents of a desired application for the grant.

While the guidelines for the application were not officially released at the time of the event, Julia Hinten, chief of staff of the Governor’s Office of Appalachia, offered insight to prepare the audience for their release.

The grants program will consist of two buckets – planning and implementation.

Hinten stressed the significance of the planning grant. The plans, she said, must showcase a region-wide scale, be evidence-based, complement current and future economic development, include a public-private partnership, and be sustainable, among other things.

Lipot reflected on the day’s panels and the hopes that they brought new insight and ideas to the forefront for those who attended.

“Serving the region and our communities is our number one priority at the Voinovich School,” Lipot said. “Supporting and providing local governments with the necessary resources, tools, ideas, and connections is vital to taking full advantage of this once-in-a-lifetime opportunity Appalachia Ohio has in front of us. We look forward to the exciting times ahead with our many partners including the region's award-winning Local Development Districts.”