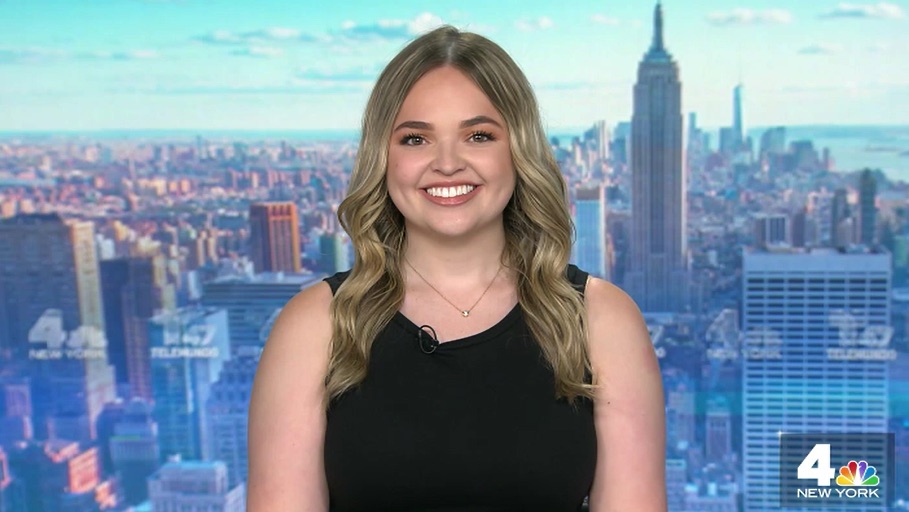 From witnessing the impact of monkeypox on the nation’s largest city, to trying on the original pair of Broadway Kinky Boots, Lexi Lepof has gained immense experience interning at NBC New York.

The OHIO senior spent the summer catching the subway from her station’s office at 30 Rockefeller Center, to cover stories in the field as a production intern for WNBC in New York City.

“When I got this internship, I was extremely excited. I always knew coming into OU that I wanted to apply to NBC," Lepof said.

“I was just kind of throwing my name into a million applications, and I actually got denied once,” Lepof said.

During her junior year, she also made it to a final round of interviews but did not get the position. However, she was determined to apply again for the summer term and crossed her fingers that she would be hired as she advanced to the final round again.

“I made it through, and they offered me the position with WNBC which was a dream come true to go and work in 30 Rock," Lepof said.

As a production intern, Lepof worked on a wide variety of projects that go into creating the show, such as writing and editing content, attending field shoots, editing video, transcribing interviews, and conducting research.

“For me, it really opened my eyes to what life in the industry is like outside of Athens," she explained.

View a Day in Her Life

In her internship, Lepof has had the opportunity to work on crucial stories the station covers that impact the entire country.

“We got to cover monkeypox, and being in New York City for that, it’s insane. Obviously, that’s the greatest impacted city right now,” she said. “It was really cool to work with the reporters on that because they are so smart. Seeing how they see things; it gave me something to think about as I go forward with my reporting.”

She was also able to work on stories surrounding the migrant bus arrival from Texas to the middle of New York City. She was able to see interviews with New York City mayor Eric Adams and White House press conferences.

“It was amazing to see, when you’re at a station like that, the huge-scale stories that you cover because those are nationwide crises," Lepof said.

On the opposite end, Lepof enjoyed working on Broadway content, where she would have access to seeing behind the Broadway stage, speaking with performers, and even trying on the original pair of Broadway’s Kinky Boots.

Though adjusting from the lifestyle of her hometown Cincinnati to the city that never sleeps was a big change for Lepof, she eventually caught on and found herself at home.

“By the end of the ten weeks, I feel like I grew up so much as a person and as a journalist. I feel like once you can move to New York City on your own, you can have the confidence to move anywhere on your own," Lepof said.

Even as she worked and lived in the big city, her ties to Athens remained present. Throughout her internship, Lepof was reminded of the uniqueness and abundance of talent in her college town.

“It wasn’t until I went through the interviews and also met so many other students in New York working at NBC to realize that what we have, and the talent that a lot of our students have – that’s not normal. We are very lucky," Lepof said.

But her work is not over yet. The station often offers extensions to its interns. Through the connections formed over her time with WNBC, Lepof secured a spot interning with the Today Show this fall. She will be able to work remotely for the show, while continuing her studies in Athens.

Lepof is a journalism, news and information studies major in the E.W. Scripps School of Journalism and is also pursuing a sports management minor and social media certificate. Outside the classroom, the young journalist spends her free time learning the ins and outs of broadcast journalism with WOUB.

“I would say the biggest part that prepared me is definitely working at WOUB,” Lepof said. “WOUB is like working at a news station year-round, but also getting to be a student. It’s legit, you’re being held to a standard, we’re putting on live show every night.”

She also credits the journalism school for granting her the writing skills that are required in all aspects of the field.

“I think everyone that I met at NBC, they always say, ‘you can be great on camera, but if your writing sucks, you are not getting a job,’” she explained.

“He’s just so smart, especially in his classes he gives advice about how to cultivate connections. What he told us is stuff that I used when I was at NBC, meet people and connect with people. That’s the stuff our professors should be telling us, because in journalism you have to have connections," Lepof said.

Lepof is a third-generation Bobcat. Though she did not initially know that she would go into journalism, she was always interested in media growing up. She was an avid public speaker as her class president, read the morning announcements, and attended weekly radio shows with her dad. Her high school English teacher, a fellow Scripps Journalism school alumnus, encouraged her to look into the journalism school.

“Looking back at it, it was so obvious that this is what I was supposed to do,” she said. “It’s always something I’ve done and loved listening to the news and the radio. It was the perfect fit, this was supposed to happen, I was supposed to go to OU and be in the J-school. It’s a blessing honestly.”