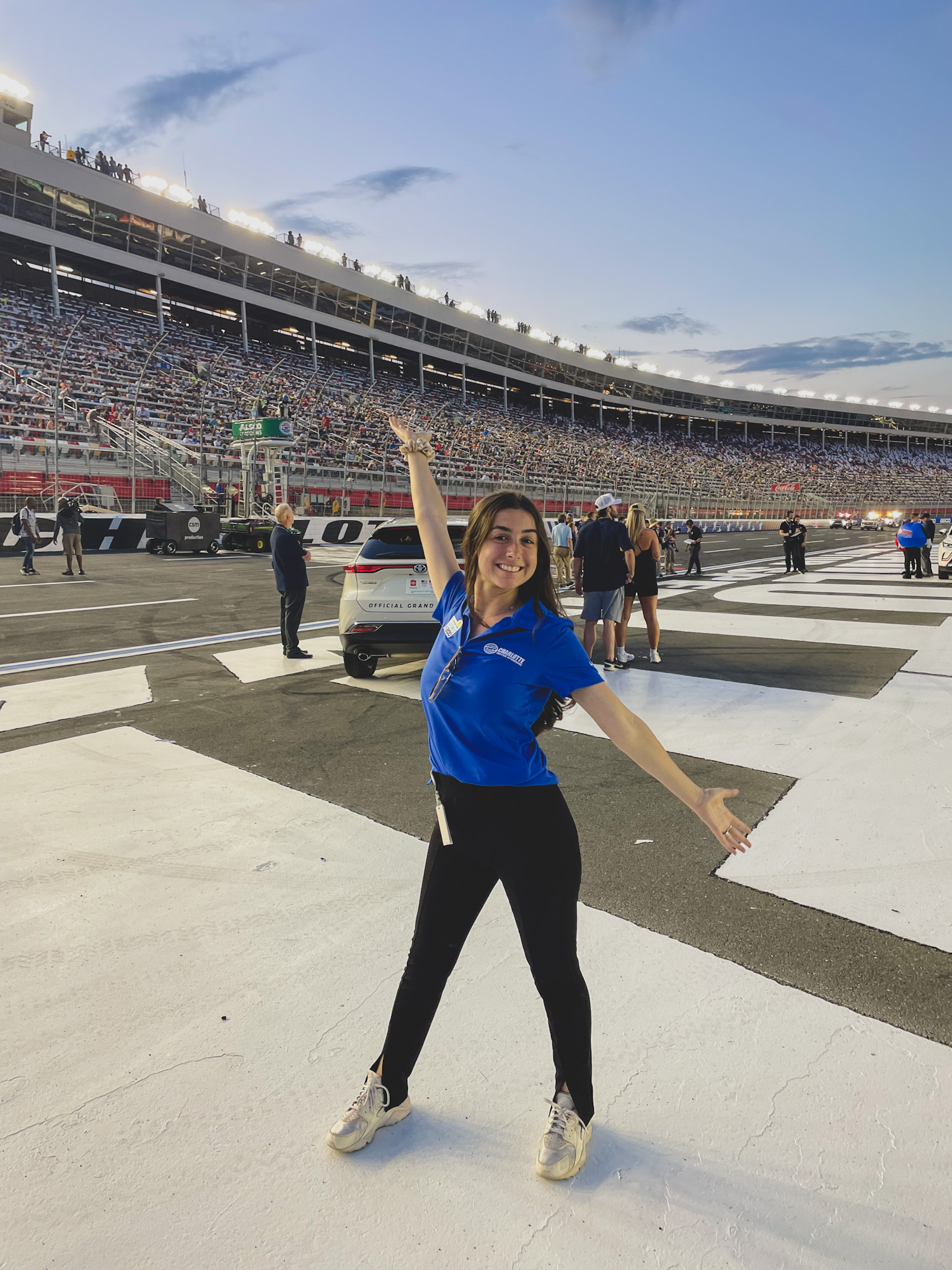 Ohio University student Sam Spinale at the Charlotte Motor Speedway during a race.

Sam Spinale is off to the races. After completing an internship in the U.S. hub for racecar driving, Charlotte Motor Speedway, her passion and dedication for working in the sport has only further ignited.

Spinale, who is finishing up her final year at OHIO, is pursuing a journalism, news and information studies degree, with a sports management minor and social media certificate. She spent the summer working in Charlotte, North Carolina as a corporate sales intern for the motorsport complex.

“It was the most fun experience of my life,” she said. “I want to work in racing, so getting this internship was really awesome.”

Her experience was equally exciting on and off the track: “The one thing I loved about my internship was that every day was different,” she said. “There were really no two days that were the same.”

View a Day in Her Life

Spinale described that her work with Charlotte Motor Speedway allowed her to see the sport from a different perspective and understand the negotiations and sponsorships that culminate into what takes place on the track.

“This internship was super beneficial for me, because it allowed me to see a side of the sport that I hadn’t yet seen,” she explained. “The sales and the sponsorship activation were both something that I really wanted to learn because it’s super important but I yet hadn’t had the opportunity. This really helped me to see how much goes into the sponsorship side of racing, and how much communicating also goes into it."

Spinale and her fellow interns were responsible for planning most of the Summer Shootout, a lower-level series of races that takes place in June.

“Our biggest role was brainstorming the fan engagement and sponsorship activation. The interns put all our efforts into it, and that was really our biggest piece for the summer,” Spinale said.

Another large event that she experienced was the Coca Cola 600, NASCAR’s longest held race.

As her internship drew to a close, Spinale recalls one of the last moments with her fellow interns as they wrapped up the last race they worked.

“My coolest memory was probably the last week of the internship, after the last race that we did," she said. "We sat on the inside of the racetrack and watched fireworks. For whatever reason, that was just the coolest thing because it was the end, but it was so cool. That was definitely the best moment.”

The native Clevelander has always had a passion for sports and knew that it would play a role in her career.

“I’ve always loved sports, and I knew I wanted to work in sports, and then racing became what I loved the most and that’s what stuck for me,” she said. “I like talking about them [racecars] more than I think I would like driving them.”

In a sports management course she took at OHIO, Spinale was introduced to a connection who was guest speaking for the class. This connection is who helped her secure her internship, and she continued expanding her network throughout her time at the speedway.

“It allowed me to make a ton of new connections, which is really awesome. The people that I’ve met are so kind and so willing to help now with anything that I need. I think that was definitely the most beneficial part,” she acknowledged.

Spinale’s roots in racing go all the way back to 2016. After attending a race with her stepdad, she was taken with the sport.

“My stepdad got me into it,” Spinale said. “I didn’t really understand it until I went to a race in June 2016. I kind of just got there and fell in love with it. Just everything about it - the vibes of the track, and the people too. The people that you work with become like family.”

“After going to a bunch of races, I knew I wanted to work in it, and the more behind the scenes and deeper I got into it the more I wanted to. It’s been six years now and I’ve done a lot of different things in racing, and I still love it,” Spinale said.

That same passion for the track she first felt six years ago has only grown larger as she comes away from the internship. Spinale leaves the experience with a sense of assurance of what she wants to pursue upon graduating.

“It’s definitely solidified that I want to still keep working in racing and hopefully move to Charlotte to work in racing, or wherever racing takes me honestly. It’s helped me to solidify that this is 100 percent what I want to do and that is a super reassuring feeling,” Spinale said.

Hopefully, when she graduates next spring, she will do just that, all while taking the knowledge she has gained from OHIO with her.

When asked her biggest takeaway from her time at OHIO, Spinale explained: “It’s anything that I’ve been able to do physically, like hands-on. My most favorite classes are the ones where I’ve gained real experience. To get involved is my number one thing that I would take away from it. All these experiences have basically built me a whole resume. All of the campus orgs are so amazing, and all of the people there. I met so many friends from just by getting involved on campus.”

She stresses the importance of involvement at OHIO, and the abundant opportunities to perfect your craft.

Spinale continues to hone her skills by working with OHIO Athletics. She collaborates with sports teams by doing social media and reporting content. She also serves as the vice president of digital communications for Scripps PRSSA, a public relations organization. In her spare time, she assists with ESPN3 productions.

Though she will soon hit the road, she will always have a piece of Athens wherever she goes.

“You just feel like you’re part of a college community,” she said of her college town. “Some colleges you don’t really feel that because it’s so big or in the middle of a city, but that’s what I love about OU. You feel like you’re really getting the college experience, and I don’t think you can get that everywhere else.”