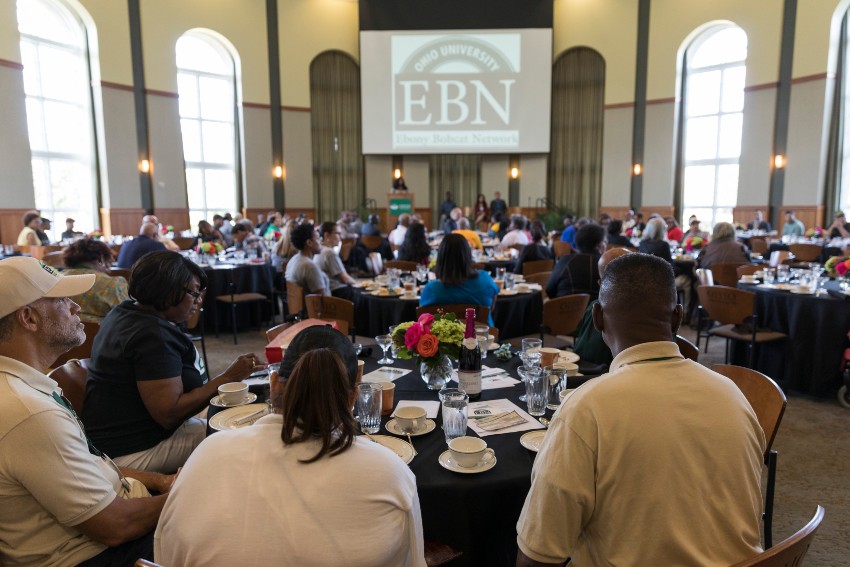 Themed “Celebrating Black Excellence,” this year’s EBN Breakfast – part of OHIO’s Black Alumni Reunion – will include the presentation of four awards recognizing Black alumni whose legacies are marked by achievement, service and actions that inspire.

This week marks the return of Ohio University’s Black Alumni Reunion (BAR)—a triennial tradition honoring the rich history and deep commitment of OHIO’s Black graduates and celebrating a community and individual Bobcats who have made remarkable contributions to the institution, their communities and fields, and society.

BAR 2022 begins Thursday, Sept. 15, and is poised to be the largest to date with more than 2,000 Bobcats returning to the Athens Campus for four days of fun and fellowship. On Saturday, Sept. 17, OHIO’s Ebony Bobcat Network (EBN) will be uplifting Black alumni whose legacies are marked by achievement, service and actions that inspire.

Always a sold-out event at BAR, the EBN Breakfast serves as an opportunity to inform participants about the alumni network, provide updates on its most recent activities and inspire involvement in the organization. Themed “Celebrating Black Excellence,” this year’s EBN Breakfast will also include the presentation of four alumni awards.

“The Ebony Bobcat Network is honored to recognize the 2022 award recipients for their professional achievements, commitment to service and devotion to OU,” said Valerie Biggs-Hill, BSC ’78, EBN president and a member of the BAR Planning Committee. “They left Ohio University with the confidence to succeed, and they did. We are grateful for the impact they have made and are making in the lives of so many.”

The EBN 2022 Distinguished Service Award is being presented to Kyle Bowser, BSC ’80, described as “a dynamic Bobcat who continuously brings his skills and expertise to his alma mater.”

Bowser’s impact and service span the entertainment industry, Ohio University and even BAR itself. With a 30-plus-year career ranging from film and television to theater and digital media, Bowser now serves as senior vice president of the NAACP’s Hollywood Bureau, where he is focused on bringing greater diversity, inclusion and equity to the entertainment industry. At OHIO, he serves on the Scripps College of Communication’s Dean’s Advisory Council, helped establish the college’s successful OHIO-in-LA program for students pursuing careers in the entertainment industry, and hosted a 2019 Challenging Dialogues lecture. Bowser not only attends but contributes in meaningful ways to BAR weekends – from giving away his work to raise funds for Urban Scholars to sharing his work, including a short film he produced on John Newton Templeton, OHIO’s first Black graduate.

A leading scorer for three seasons of Ohio University Men’s Basketball, Jackson led the Bobcats to the 1964 MAC Championship and the Elite Eight in the NCAA Tournament. He was drafted by the Detroit Pistons and has been inducted into four Halls of Fame, including the Kermit Blosser Ohio Athletic Hall of Fame in 1977, the Ohio University Zanesville Hall of Fame in 2007 and the Ohio Basketball Hall of Fame in 2010. While an injury thwarted his opportunity to play in the NBA, Jackson turned to a life of service that included the Army and more than 30 years as a middle school teacher. His service to the community includes 12 years as coach for the Ohio University Zanesville Men’s Basketball Team, a board member of Zanesville’s Nelson T. Gant Foundation and president of the Rendville Historic Preservation Society.

Smith’s OHIO journey started as a student-athlete whose excellence on the court – as a record-holder and member of the Ohio University Women’s Basketball 1,000-point club – carried over into the classroom as a dual major and now assistant professor of instruction in the College of Business. As a faculty member, she brings a wealth of experience to the OHIO students following in her footsteps, including 25 years as a management consultant in corporate America, owner of her own management consulting firm and publishing company, author of eight books, and a sought-after speaker covering topics that range from leadership to project management. In creating pathways for others to succeed, Smith founded Sports Legends of Cleveland, a nonprofit dedicated to revitalizing sports programs within the Cleveland Metropolitan School District and providing student-athletes experiences that will allow them to compete at higher levels.

The 2022 EBN Legend Award celebrates OHIO graduates Connie Lawson-Davis, BSED ’67, and Dale Ricardo Shields, BFA ’75, MFA ’95, whose marks on the world and the lives of others place each in a league of their own.

Lawson-Davis’ passion for education and supporting youth started as a middle school teacher and transitioned to a library career and active membership and leadership in the American Library Association. In 2001, Lawson-Davis reconnected with her alma mater and for the past two decades has touched the lives of countless students, faculty, staff and fellow alumni. Her steadfast dedication includes serving on the OHIO Alumni Association Board of Directors and BAR Planning Committees, chairing the Ohio University Women’s Club of Greater Cleveland and serving on its Executive Board, serving as a founding member and officer of EBN and facilitating the establishment of its national affiliates. Her connections with students range from being an active participant in OHIO’s Volunteer Alumni Admissions Network, mentoring Student Alumni Board members, judging for the Student Research and Creative Activity Expo, and interviewing students for the Urban Scholars Program.

Shields’ holds a legendary and award-winning resume as an artist and educator, historian and activist in the arts. His professional work as an actor, director and stage manager spans Broadway, off-Broadway, television and film and includes acting credits on “Anyone Can Whistle,” “The Cosby Show” and “Saturday Night Live.” As an educator, Shields has taught workshops and classes for several programs and institutions across Ohio and the United States, garnering him prestigious awards that include the 2017 Kennedy Center/Stephen Sondheim Inspirational Teacher Award®, the 2017 AUDELCO/“VIV” Special Achievement Award, The Actors Fund 2020 and 2021 ENCORE AWARD, and a 2015 Tony Award® nomination for the Excellence in Theatre Education Award. Shields’ drive to preserve the history of African American and Black actors includes the creation of the Facebook website Black Theatre/African American Voices and IForColor.org.

The EBN 2022 Young Professional Award is being presented to Jeremy Wright, BSH ’10, MHA ’15, whose more than decade of service in health care management and recent entrepreneurship in the Chicago area have helped build healthy and vibrant communities.

As the regional operations director for Cook County Health, Wright provided oversight for nine primary care and specialty health centers and served as site director for a mass COVID-19 vaccination clinic. In 2017, he seized another opportunity to make a difference in his community, launching Thrift, LLC, an online thrift and consignment store, focused on community building and economic stability and selling original products created by Black entrepreneurs. Last year, Thrift debuted its first brick-and-mortar location with Wright purchasing and rehabilitating a building in a Chicago inner-city neighborhood targeted for revitalization. His service includes mentoring high school students through Chicago Scholars and volunteering with many civic organizations and boards, including the OHIO Alumni Association Board of Directors. In 2019, Wright was presented the United Way of Metro Chicago’s Community Leadership Award.

In addition to the awards presented at the EBN Breakfast, the alumni network will also uplift two other OHIO graduates, honoring them with the EBN Trailblazer Award during the BAR Gala the evening of Sept. 16. Click here to read about 2022 Trailblazer Award recipients Elmore “Mo” A. Banton and George E. Reid, BGS ’90, MSPE ’91.

Open to all OHIO graduates and friends, BAR is one of the Ohio University Alumni Association’s signature events and the largest alumni gathering outside of Homecoming. For more information about BAR 2022, including opportunities to give in honor of the Black OHIO graduates of the future, click here.