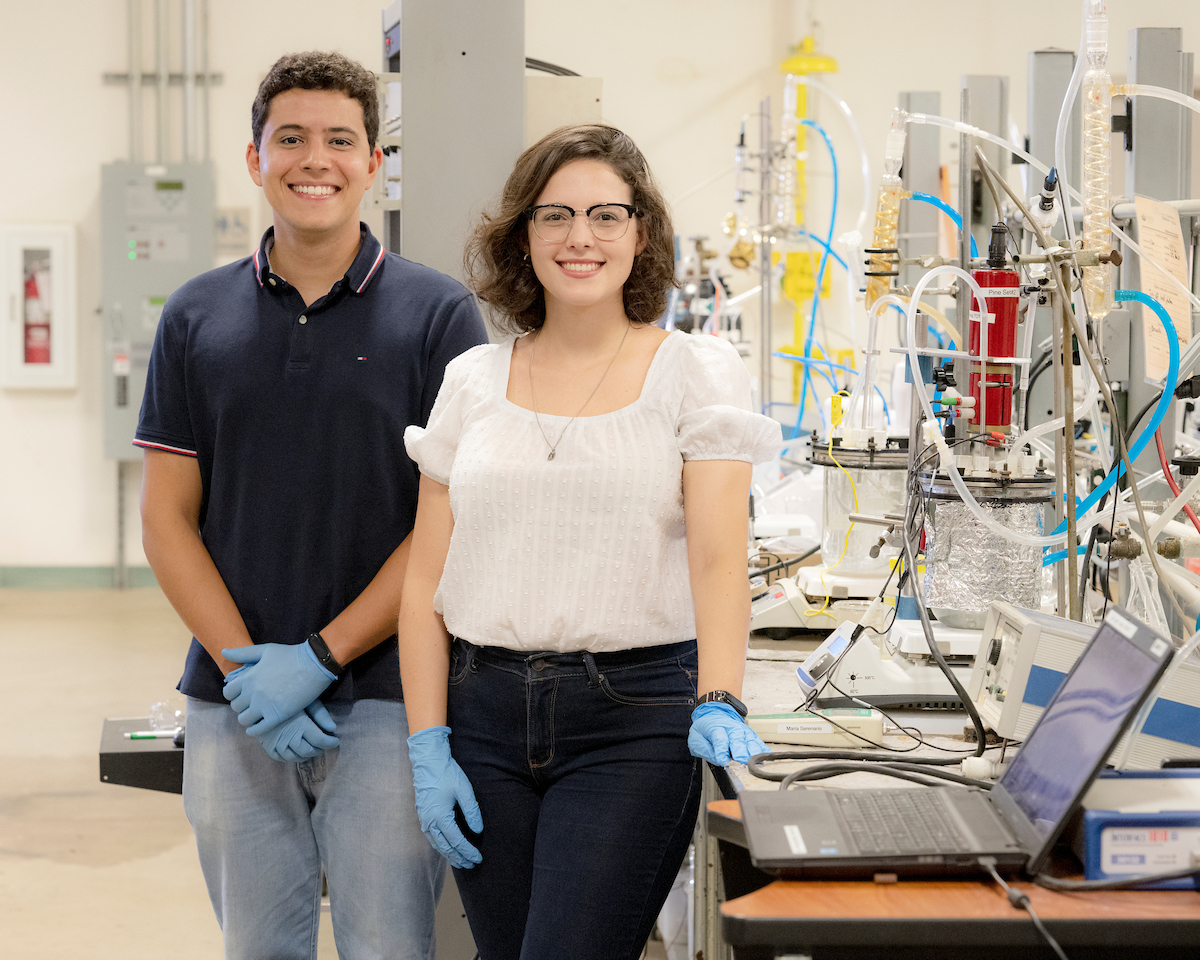 For Ph.D. students Bernardo Santos and Maria Serenario, studying corrosion at Ohio University’s Institute for Corrosion and Multiphase Technology (ICMT) was a top priority before they completed their degrees.

Santos and Serenario, both originally from Brazil, shared more than just their home country. They both studied mechanical engineering as undergraduate students and pursued their master’s soon after graduation. While studying mechanics and material science, their passion for research in corrosion began to emerge.

When they, independently of one another, decided to pursue their Ph.D., a new opportunity emerged. The Brazilian government offered a scholarship for doctoral students to study in a research exchange program. With an interest in corrosion, both students knew exactly where they wanted to study — Ohio University.

“We knew of the ICMT because we were always reading papers from researchers here. We knew the ICMT was one of the best corrosion centers in the world,” Santos said.

When they got the news they were awarded the scholarship, both students made their way to Athens, Ohio.

“Everyone was really welcoming with us the day we arrived. Dr. Young picked us up from the airport on the first day,” Santos said.

David Young, Ph.D., associate research professor in the Department of Chemical and Biomolecular Engineering, was one of the many people who made Santos and Serenario feel at home from the moment they arrived on campus.

Beyond their welcome to the ICMT, they were warmly welcomed to the Athens community. Santos recounted a story of how his advisor, Marc Singer, Ph.D., associate professor in the Department of Chemical and Biomolecular Engineering, invited Santos to join his recreational soccer team, The Hellbenders.

“My first week in town I was already playing for the team, and we played together this whole year. It was an amazing experience,” Santos said.

While so many faculty, staff and students contributed to their positive experience, their project leader, Xi Wang, Ph.D., helped guide them in their respective projects.

“Every time you have a doubt, Xi is open to talking about it. Even though she’s young, she is very experienced. I thought, ‘If she knows how to do something, then I can do it too,’” Serenario said.

Santos and Serenario have been working on their own projects at the ICMT for a year. Independently, they are both working to investigate the internal corrosion of pipelines in the oil and gas industry and identify solutions and processes that reduce corrosion. They test a variety of conditions to simulate corrosion in its natural environment in order to prevent future accidents and improve industry safety.

As they wrap up their projects, they have begun to think about their next steps in their careers. In Brazil, earning a Ph.D. means that students are preparing to teach in the university setting. Engaging in post-doctoral research or working as a researcher in industry is less common. This exchange program has allowed Santos and Serenario to explore the possibilities of their futures, after meeting international students from all over the world studying in the ICMT.

“The exchange of culture has been amazing. The center is very international, so we were always surrounded by people who knew what we were studying and also had new things to share,” Santos said.

In addition to the cultural exchange, Santos and Serenario felt supported in their research.

“The facility is phenomenal. We have everything we need and if there is something that would be useful to our research, we just ask for it. We are surrounded by people who really understand corrosion who want to help us,” Santos said.

According to Santos and Serenario, a year of research has gone by quickly. From studying corrosion with renowned faculty to spending their evenings exploring Jackie O’s Pub and Brewery and the Little Fish Brewing Company, they made countless memories that they will take back to Brazil with them.

“Back home in Brazil, there is a student in our lab, and we have already told her to do a research residency at Ohio University. Before we came to the ICMT, we were a little afraid because we would be working with experts in the corrosion field. Now we can share with her that they will not bite you,” Serenario joked.