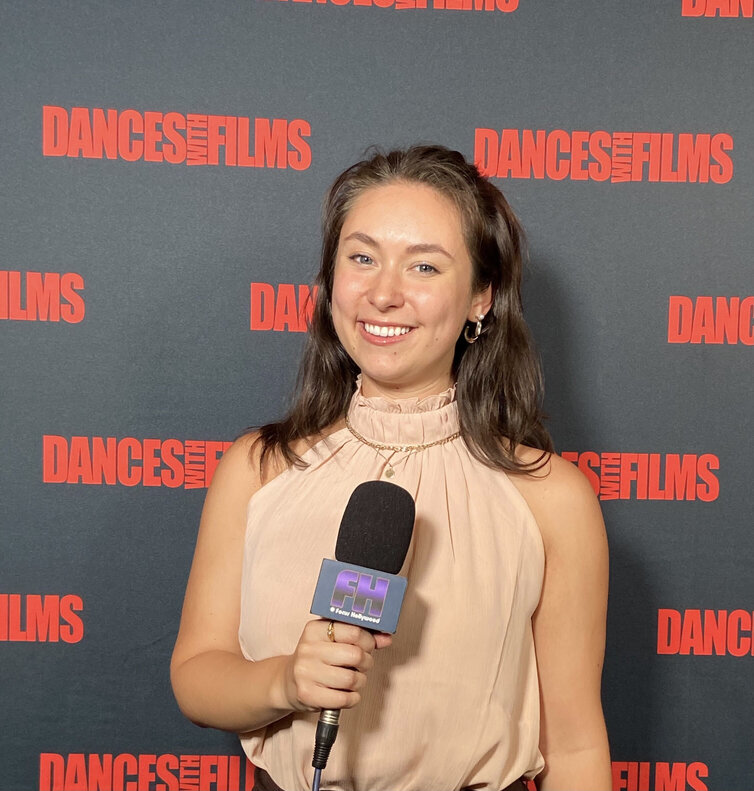 Taylor Mondragon poses before interviewing stars at the Dances with Films festival.

After switching to a journalism major, senior Taylor Mondragon knew what she wanted to do: enroll in Ohio University’s OHIO in LA program and study in Los Angeles, Calif.

“There is so much you can do at OHIO,” Mondragon said. “We are very fortunate to have so many opportunities there, but it is so special to be able to say I have been on the ground, doing this work [in Los Angeles], meeting these people and actually making these connections and building these relationships with people.”

Over the past eight years more than 350 Ohio University students have traveled to Los Angeles as part of the OHIO in LA program, which is led by Roger Cooper, associate professor in the School of Media Arts and Studies. While in Los Angeles, students live in the Toluca Hills Apartments, sandwiched between Hollywood and Burbank.

Mondragon first developed interest in the program when she was a musical theater major in her first year at OHIO. Though Mondragon remains interested in musical theater, she switched her major to journalism with a minor in social media and a marketing certificate. Throughout her time in the E.W. Scripps School of Journalism, Mondragon sought to build her resume to apply for the OHIO in LA program.

Jennifer Talbert, who advises the Forensics Speech and Debate Team and is the John A. Cassese Director of Forensics at Ohio University, helped Mondragon make connections with alumni in Los Angeles.

“[Talbert] posted my resume on the speech team’s alumni page, so she was trying to help me get an internship out here,” Mondragon said. “She has done so much in the year that I've known her, and she's been very proactive in trying to get all of us every opportunity we possibly can get.”

Equipped with her resume and the connections she made with the help of Talbert, Mondragon headed to Los Angeles in late May.

After landing in sunny Los Angeles, Mondragon began classes through the program: Business of Hollywood and Production in Los Angeles. Business of Hollywood is an internship course where Cooper invites Ohio University alumni and professionals in various industries to share insights about their careers and to give advice to help students preparing to launch their own careers. Production in Los Angeles puts students into groups that receive budgets to produce short films. Mondragon is the casting director for her group.

The internship section of the program requires students to search for positions that fit their interests to enhance their skills in fields they would like to enter. Mondragon secured an internship with media company FireVinyl as a social media coordinator before arriving in Los Angeles. Mondragon uses social media such as TikTok and Instagram to highlight up-and-coming artists.

Using her journalism degree, Mondragan is interning as a red-carpet host at Focus Hollywood, where she interviews Hollywood celebrities. At the Dances with Films festival, she interviewed Justin Chatwin, known for his role as Jimmy Lishman in Showtime’s hit television series “Shameless.”

She also started a public relations and communication internship for PBS SoCal where she monitors and reports the media outlet’s coverage, helps with large events and works with a team to choose designs for merchandise.

Along with other OHIO students, Mondragon toured Warner Brothers and Universal Studios, visited the Grammy Museum and attended “The Late Late Show with James Corden” and “Jimmy Kimmel Live!”

For Mondragon, OHIO in LA has been a self-described amazing experience and she enjoyed getting to explore Los Angeles and all the opportunities the city has to offer.