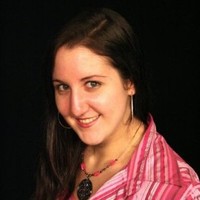 Sarah Krause’s Ohio University and WOUB story isn’t typical. She grew up near Cleveland and planned to “get out of Ohio” for college to study theater. Ohio University was her “back up plan.”

“The best laid plans sometimes don’t work out,” Krause said. “But I went to Ohio University and just ended up loving it.”

Krause started as a theater major with a goal of being a performer. One day when she was in class, she was practicing a line using a British accent, and her professor Keith Newman asked her what part of England she was from.  Krause explained that she was not from England.

“Right then, Newman marched me down to WOUB Radio, and we spoke with [program director] Bryan Gibson,” Krause said. “Newman told Gibson that he thought my voice talents could be used on the radio. I ended up working for WOUB doing public service announcements and reading the weather. I also learned to run the radio board. It was a great job because I could come in to record any time, day or night.”

Krause eventually decided to incorporate her voice work and media skills into her degree program. She created a Bachelor’s of Specialized Studies degree in multimedia performance where she took classes in theater, communication and film.

“I loved theater, but I wanted to be able to control my own destiny,” Krause said. “I just loved the voice work.”

After graduating in 2008, Krause did not immediately get into media, voice work or theater.

“I did what many who pursue acting do. I ended up in retail,” Krause laughed. “I actually worked for Follet’s Bookstore and stayed in Athens for a year after college. I eventually became the bookstore manager on the Lancaster campus and learned great skills on how to build a team and how to develop people. It was right around that time that I started getting into tabletop gaming.”

Krause continued to advance in her career in specialty retail management, working at Starbucks for three years and then NowPow, a tech-startup on the south side of Chicago that built resource directories for health care and social needs. But her interest in gaming continued to grow. So in 2018, while still working in specialty retail, Krause started Rem Alternis Productions.

“My passion for gaming started with Dungeons & Dragons, and eventually learning Shadowrun, which I fell in love with,” Krause said.

Shadowrun is a science fantasy tabletop role-playing game set in a near-future fictional universe in which cybernetics, magic and fantasy creatures co-exist.

“That caused me to write the script for a live action cyberpunk/fantasy web series set 60 years in the future called Chicago Shadows.”

Rem Alternis is Krause’s creative works company that creates original content, working with artists and writers to breathe life into amazing new worlds. The work includes multimedia projects like Chicago Shadows, live content and tabletop gaming. The company also forms partnerships with other creative individuals and companies to increase their visibility and assist with customer engagement.

“I think the voice work I did at WOUB, putting on the headset and being able to record myself using the radio board, play it back and do minor editing, ignited the fire for media,” Krause said. “We are starting to do work with audio books, audio editing and podcasts, and that love of audio production started with WOUB.”