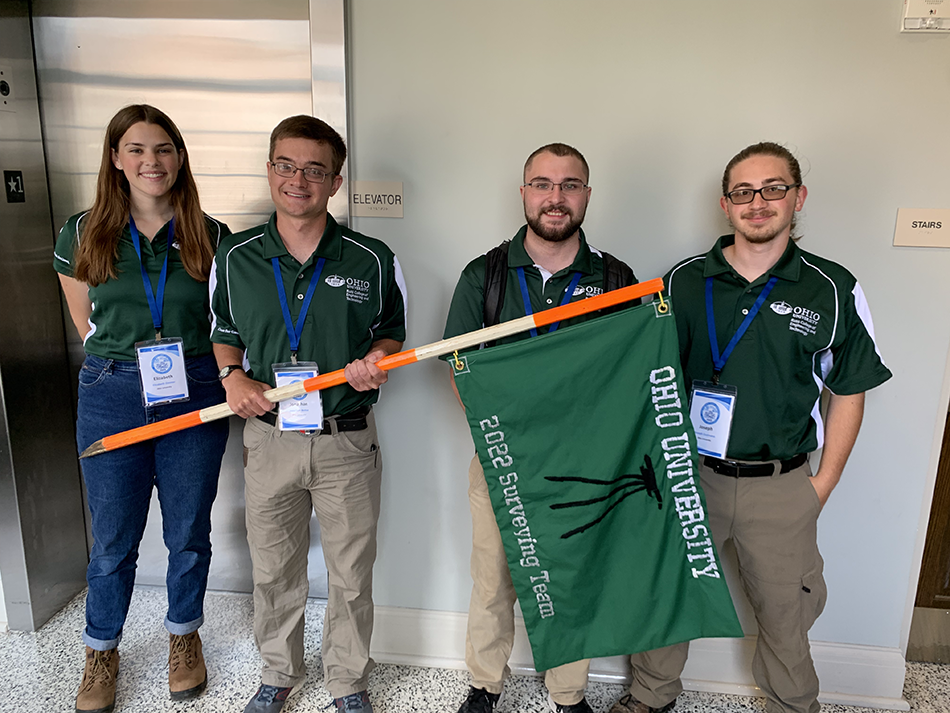 The competition hosted thirteen schools from across the United States. Each competitor earned their place in the national competition by winning their respective regional competitions earlier in the year. The OHIO team earned first place in the regional symposium for the Eastern Great Lakes Region, which represented participating universities in Ohio and Michigan.

“The highlight of being on the team was getting the chance to meet other civil engineering majors from across the country. It was a great opportunity to learn more about the field and what opportunities there are,” second-year student Liz Zimmer said.

At the national competition, each team was required to complete a topographical map and presentation and four field tasks. In the topographical mapping portion of the competition, the team earned sixth place. In the field surveying tasks, the team secured third place and their overall score was fourth place. Their efforts represented both their region and OHIO, showcasing that they have developed the hands-on experience to excel in surveying at the national level.

“The greatest challenge we experienced was to complete the surveying tasks as quickly as possible with as much accuracy as possible, so we could maximize points at each station,” fourth-year civil engineering student Jonathan Beiter said.

“Their placement in the top half of the event reflects their skill and expertise in surveying, plus the preparation needed to efficiently carry out the tasks in the competition environment. I am very proud of what they have accomplished, and I am excited to build on this year’s success in the 2023 competition,” Ben Sperry, associate professor in civil engineering and faculty advisor of ASCE, said.

“The national competition really put into perspective how much experience I have gained from Ohio University and my internships. All the pieces I had learned throughout my college career coming together was an extremely satisfying experience,” Garrett Spargur, BSCE ’21, said.

Spargur noted that half of the OHIO team was composed of first-year students. These students joined the organization and the surveying team with very little surveying experience outside of the classroom, but they worked hard to contribute to their team.

“They showed how easily surveying can be picked up with a little ambition,” Spargur said.

Each team member who attended the national competition enjoyed getting to know civil engineering students from across the country. In addition to putting their skills to the test, they had the opportunity to learn from other competitors as they competed and observed other teams throughout the competition.

“We each came from different regions, different backgrounds and different cultures, but we all had civil engineering in common,” Spargur said.