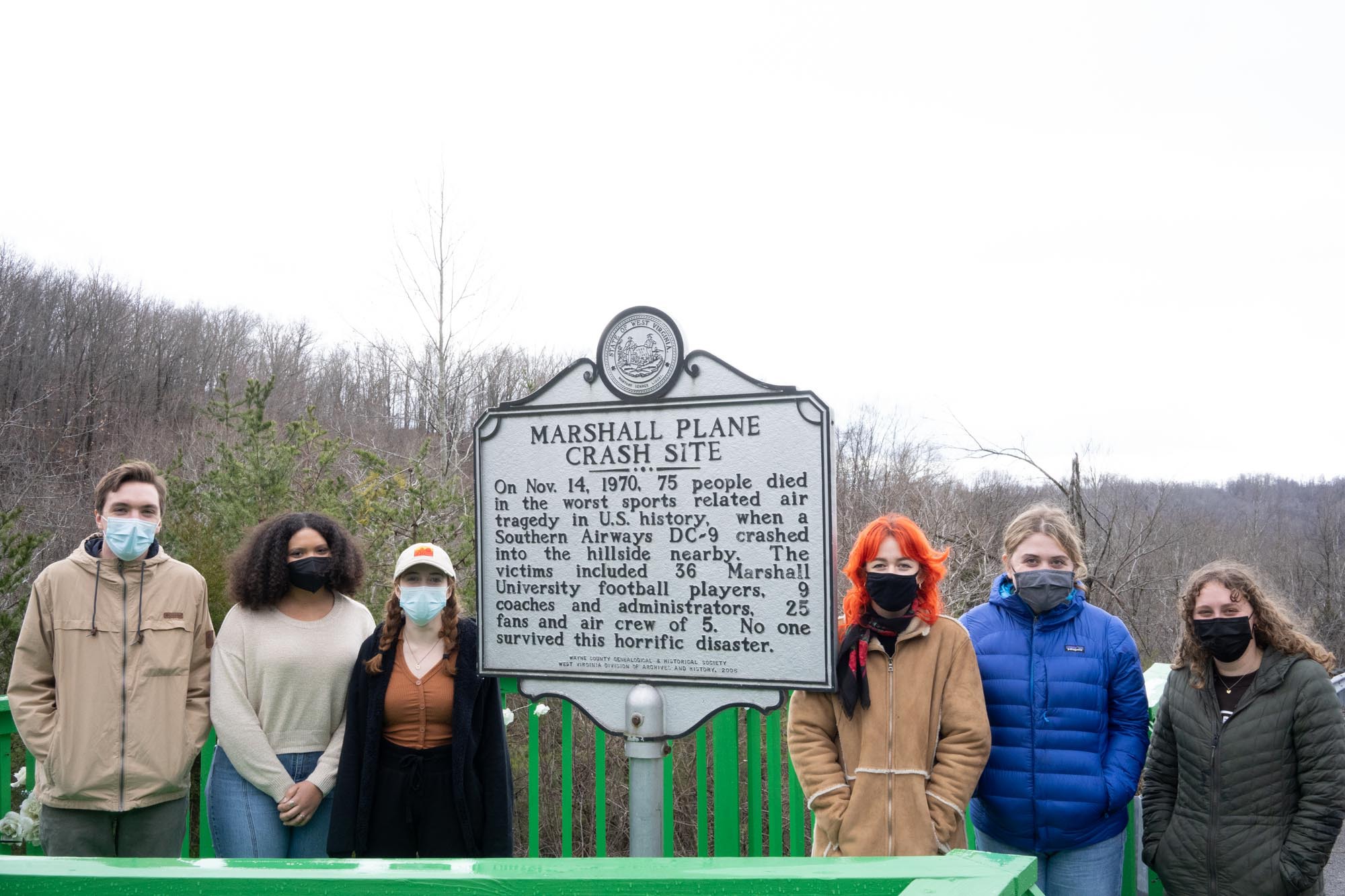 Students from the Journalism and Trauma class visit the site near Tri-State Airport near Huntington, West Virginia, where a Southern Airways DC-9 crashed into a hillside on final approach in November 1970, killing 75 players, coaches, fans and sports reporters for the Marshall University football team plus the flight crew. Left to right are: Joe Timmerman, Maya Meade, Katie Millard, Audri Wilde, Izzy Keller and Molly Powers.

A plane crash, a bridge collapse and campus shootings provided students in Ohio University’s E.W. Scripps School of Journalism class an opportunity to learn how to better cover traumatic events.

Members of Professor Nerissa Young’s Journalism and Trauma class took two field trips during the spring semester to better understand traumatic events from the region’s history and to learn best practices by speaking with trauma survivors.

The first stop was Huntington, W.Va., to visit sites relevant to the 1970 Marshall University football team plane crash — the worst sports disaster in American history — that killed 75 players, coaches, fans, sports reporters and the flight crew. Students visited the crash site, the campus memorial fountain and Spring Hill Cemetery where some of the players are buried.

“I was floored by the fact that the Marshall community is so connected to the plane crash,” said Izzy Keller, a senior from Sandusky, Ohio.

The class then stopped in Point Pleasant, W.Va., the site of the 1967 Silver Bridge collapse in which 46 people died after an eyebar failed, a tragedy that changed national bridge construction and inspection standards. The Silver Bridge connected Point Pleasant and Gallipolis, Ohio. The Mothman legend arose from the disaster as townsfolk who saw the winged creature said its appearance was a forewarning of the collapse. Students visited The Mothman Museum and the Mothman statue nearby.

“I thought it was interesting going around and seeing all these landmarks, museums, and memorials, how after a traumatic event occurs, no matter how long ago something occurred, it becomes a part of the culture of the community,” said Audri Wilde, a junior from Pickerington, Ohio.

Young has taught the class for five years. She attended a University of Missouri Reynolds Journalism Institute fellowship to learn how to design the course.

“I deliberately choose case studies from the region for two reasons,” Young said. “It presents the opportunity for experiential learning, and it teaches students more about the region where they are getting their educations. In journalism, there is no substitute for being there.”

For each case study, students review contemporary news coverage from local and national outlets and discuss what journalists did and didn’t do well with regard to what details are reported, how victim interviews are conducted and whether news outlets rely on tropes or original reporting to frame the story.

On a second trip, students traveled to Chardon, Ohio, to visit with school personnel who helped save lives during the 2012 Chardon High School shooting that left three students dead and three wounded.

The trip coincided with the 10th observance of the tragedy. School personnel shared their reflections about the event and their journeys toward healing.

On the return to campus, the class stopped by Kent State University, where a 1970 shooting by National Guard troops during a student protest about the Vietnam War left four dead and nine wounded. Pulitzer Prize-winning photojournalist John Filo visited the class before the trip to share his experiences when taking the iconic photo of the young woman kneeling next to the body of Jeffrey Miller.

Students retraced Filo’s steps in the minutes leading up to the 67 rounds fired in 13 seconds.

“Watching and learning about it doesn’t really compare to seeing it,” said senior Molly Powers from Cleveland.