Experiential learning launches careers and 'permission to embrace the unknown' 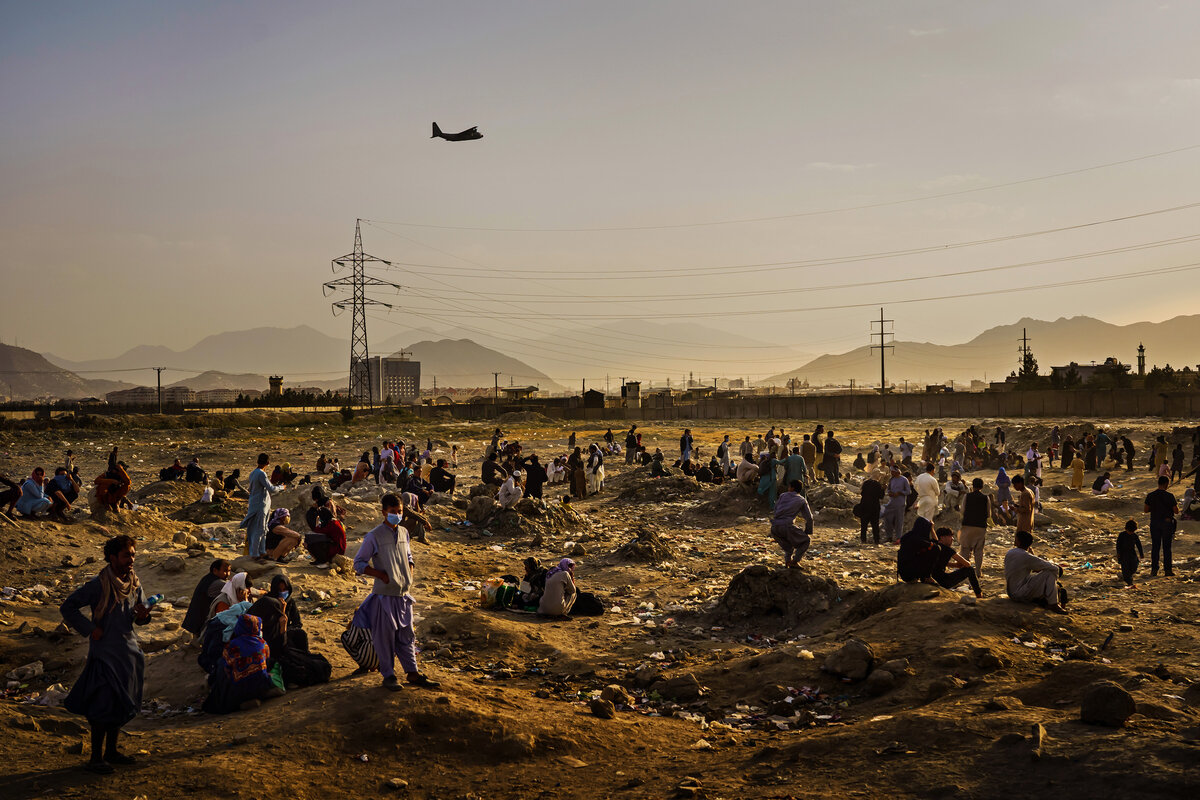 Marcus Yam/Courtesy of the Los Angeles Times A military transport plane departs overhead as Afghans hoping to leave the country wait outside the Kabul airport on Aug. 23, 2021. Since the Taliban takeover of Afghanistan earlier in August, more than 120,000 people were airlifted out of Afghanistan in one of the largest mass evacuations in U.S. history.

For those into metrics and jargon, national higher education experts say students in activity-based programs perform up to 20% higher. If you’re looking for a slam-dunk data point on the power of experiential learning, check out the 2022 Pulitzer Prize results.

Marcus Yam of the Los Angeles Times swept major photo awards this year including a Pulitzer Prize — a professional pinnacle like an Oscar in cinema or MVP in sports — with more danger. Yam’s winning Pulitzer portfolio documented the chaotic U.S. exit from Afghanistan, where the Taliban roughed him up.

Hands-on, transformative experience at Ohio University, Yam said, “gave me permission to embrace the unknown.” Yam remembers a year of immersion in the hamlet of Shade, Ohio. As a student at the School of Visual Communication, he drove a Jeep to the unincorporated community south of Athens to compile his photo essay for Professors Terry Eiler and Stan Alost.

“That experience in Shade set the foundation for my career,” Yam said. “I had a sense of being unleashed. It gave me the confidence to go anywhere.”

Born in Malaysia in 1984, Yam nearly dropped out of high school to pursue sports gaming. He earned a degree in aerospace engineering from the University of Buffalo in 2006. As Yam migrated to photography, he was accepted in 2007 into a “boot camp” program at Ohio University designed for mid-career switchers.

Since 1976, 84 alumni, students, and faculty have won or contributed to teams that won at least 55 Pulitzer Prizes.

Student-media experience prepared 2022 Pulitzer winner Matt Zapotosky, BSJ ’08. “In a lot of ways, I really learned how to be a journalist at The Post at Ohio University,” he said.

Zapotosky was part of The Washington Post team that won the Pulitzer Prize for Public Service for coverage of the attack on the U.S. Capitol on Jan. 6, 2021.

Higher education experts have long touted the power of experiential learning across multiple disciplines, in addition to “knowledge transfer” based education. Hands-on experience is especially relevant in communications careers because employers want to see portfolios, published work, and highlights reels.

Chuck Scott, MSJ ’70, the Navy-trained photographer who co-founded what is now Ohio University’s School of Visual Communication, was an evangelist for experience who launched hundreds of careers. May 9, 2022, when Pulitzer Prizes were announced, was another milestone in that long legacy.

In a departure from the norm, the Pulitzer Prize Board awarded two prizes for Breaking News Photography: Yam for poignant images from Afghanistan and Ohio University alumnus Drew Angerer, BSVC ’11, and colleagues at Getty Images for coverage of the Jan. 6 insurrection.

“Between Pete Souza, Marcy Nighswander and Jenn Poggi — I had all of them as instructors, and they all had worked in Washington at various points in their career — it was definitely something I was interested in and wanted to try,” Angerer said.

Photographer Amanda Voisard, BSVC ’02, was inside the Capitol on Jan. 6, 2021; her work was part of The Washington Post’s Pulitzer package.

David Swanson, BSJ ’88, was a Pulitzer finalist for Feature Photography with a Reuters photo team recognized for images on climate change. Swanson’s photo showed a fire train fighting the Dixie Fire along tracks over a bridge in Plumas National Forest (California) on July 15, 2021.

Swanson’s award-winning career — including 34 years at The Philadelphia Inquirer, where he was part of the team that won a 2012 Pulitzer Prize for Public Service for a series on school violence — started on campus with experience at The Post, taking pictures for the University, and a job at Wilson’s Camera store on Court Street.

One such foreign-news intern was Laura Landro, BSJ ’76, who recalled the trajectory from Athens to a London internship at McGraw-Hill World News, steering her toward business journalism.

“I had barely squeaked through Economics 101 in college,” Landro wrote in her 1998 book on surviving cancer. “Suddenly I found myself reporting on the oil industry, the metal trading business, nuclear power companies, and petrochemical trading. Surprisingly, I found I actually liked it.”

The sink-or-swim internship experience in London helped launch Landro’s award-winning 35-year career at The Wall Street Journal. Now Landro is a benefactor to Ohio University’s student-run The Post, where she worked prior to her internship in London.

Experiential learning across media platforms is common. Ethan Sands, BSJ ’21, worked at WOUB, The Post, and Southeast Ohio Magazine and also completed a podcasting internship in Washington, D.C. as part of the Scripps Semester in D.C. study-away program.

“I wouldn’t be anywhere near where I am now without” hands-on experience, mentors, and internships, he said.

Ohio University offers music-production master classes in New York and Austin and sponsors a networking experience to South by Southwest (SXSW) in Austin every year in March.

The Scripps College of Communication sponsors hands-on learning in Washington, D.C., Los Angeles, and New York City. More than 60 Ohio University students have interned at the Miss Universe organization in New York City, including Meg Omecene, BSJ ’16, who experienced crisis-communication work in 2015. She was hired by the Miss Universe public relations agency after graduation.

“Three years after graduation, I was hired to be the head of communications for Miss Universe,” said Omecene, now senior manager of corporate communications at VISA.

After this spring’s graduation, Annie Fink, BSC ’22, joined a talent agency in Los Angeles. Fink, from Ashland, Ohio, “stepped comfortably” into her fast-paced Hollywood job because of college participation in the OHIO-in-LA program and faculty who improved her interviewing skills and resume (more than 350 students have participated in OHIO-in-LA in eight years). Plus, Fink had experience at WOUB and the 48-Hour Shootout on campus.

On campus, Will Gray (VRGD, ’20) spent much of his time in the GRID (Game Research and Immersive Design) lab. Developing game and exhibiting work created this path: awards to internship to job. Within two years after graduating from OHIO, Gray was working at Ford Motor Company, developing employee training simulation with virtual reality.

Ohio University’s award-winning speech and debate team has helped launch lawyers, judges, and corporate execs – and the voice of Bart Simpson, Nancy Cartwright. In her sophomore year at Ohio University, Cartwright placed fifth in national competition with her speech, “The Art of Animation.”

As Bart would say, “You’re the smart one, you figure it out.”

An award-winning student journalist, Ken Klein earned a BSJ degree from Ohio University with first-hand appreciation for experiential learning. He was associate editor of the independent student-run The Post (1975-76) and completed internships at the Cincinnati Enquirer, The Palm Beach Post, and The Associated Press in Tel Aviv. He is a research assistant professor in the Scripps College of Communication.

Klein worked for the Gannett-owned News-Press in Fort Myers, Florida, and The Associated Press in Tallahassee, Florida, prior to joining the staff of U.S. Sen. Bob Graham in 1987 in Washington, D.C. He served as press secretary, legislative director, and chief of staff for Sen. Graham, who never lost a statewide election. In 2001, Klein joined the national trade association for out of home advertising to lead the industry’s federal advocacy. Widely published and quoted, Klein also served as an expert witness on First Amendment matters. In 2021, the out of home advertising industry inducted Klein into its Hall of Fame.

He was honored by the director of the FBI (2011 Community Leadership Award) for building an innovative, effective public-private partnership to help law enforcement. In 2019, Ohio University recognized Klein as Outstanding Federal Government Alumnus, noting his long service on the Dean’s Advisory Council at Scripps College of Communication, his efforts to boost the University’s visibility, and his support for Ohio University interns in Washington, D.C.