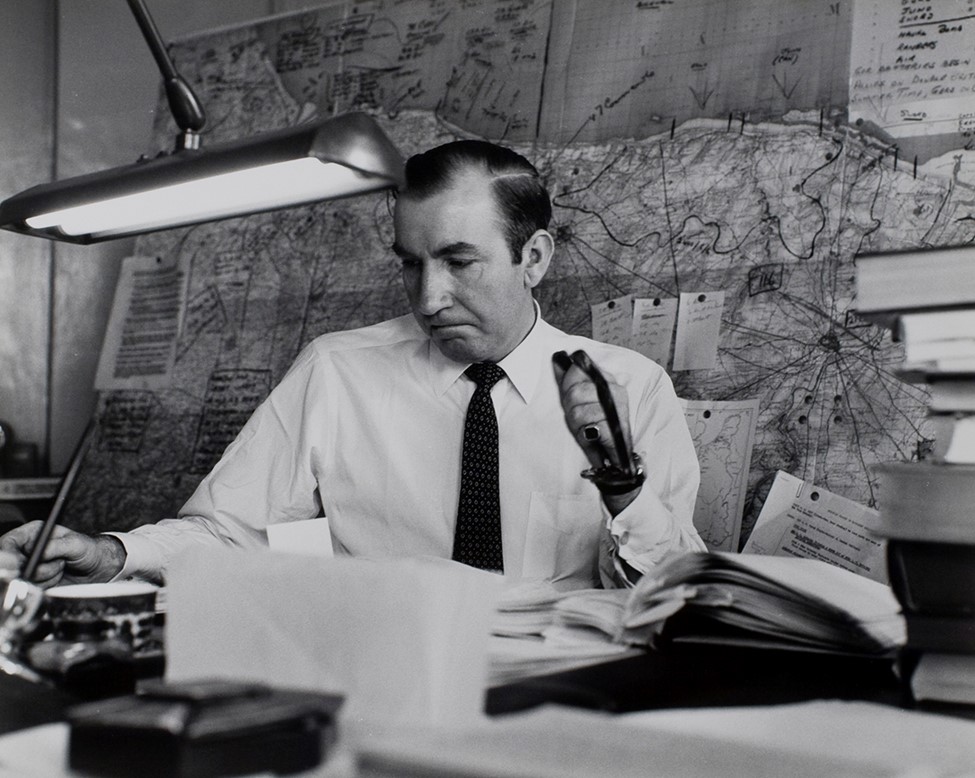 Eugene Cook Above, Ryan works on his manuscript for the “Longest Day.” Photo courtesy of the “Cornelius Ryan Collection of World War II Papers” from University Libraries’ Mahn Center.

Ohio University Libraries and the Canadian Research Mapping Association (CRMA) will host an online panel discussion titled “Commemorating D-Day: Transcribing Veteran Questionnaires from the Libraries’ Cornelius Ryan World War II Papers” on June 1 from 3 to 4:30 p.m. highlighting an international collaborative crowdsourcing project that transcribes and digitizes questionnaires from the Libraries' Cornelius Ryan Collection of World War II Papers. The discussion will be hosted via Microsoft Teams and is free and open to the public.

In the 1950s, Ryan, a war correspondent and best-selling author of “The Longest Day,” solicited first-hand accounts of over 150 interviews and 900 questionnaires from civilians and military personnel across the United States, Canada, Great Britain, France and Germany who had participated in the D-Day invasion at Normandy, France on June 6, 1944.

This collection of personal stories about the battle on the shores of Normandy provides extraordinary insight into World War II through the eyes of people who lived through it.

“In order to write the books, he [Ryan] put out an ad in Readers Digest to get veterans’ accounts of D-Day and their memories, and he kept all his research material,” Greta Suiter, manuscripts archivist and one of the presenting panelists, said. “These are all individual stories, and individuals’ reminiscences of what they remember about World War II and D-Day.”

“It gives you this insight into soldiers and veterans’ mindsets even after [the war] … So, that way too, you have had some of those experiences crystalize in people’s minds,” Suiter explained.

The interviews and questionnaires are in various stages of readability and can be hard to read even with optical character recognition (OCR) software, an electronic conversion of text into machine-encoded text, so the outcome is sketchy. The need for human transcribers to undertake the transcription process became apparent and led to an international partnership to heighten discoverability of the primary resources stemming from the Cornelius Ryan Collection — which ultimately led to the campaign to recruit volunteer transcribers.

“[In 2021], we collaborated with the Canadian Research and Mapping Association (CRMA), because they are very interested in the Canadian interviewees and questionnaires that are in the [Ryan] collection,” Suiter said. “So, [CRMA] was able to recruit transcribers.”

“Transcription is a vital component of digital projects that reuse textual data, such as the CRMA’s Project ’44, an interactive web map that allows users to explore WWII through digitally preserved maps, aerial imagery and war diaries. To support this effort, the CRMA recruited volunteers to transcribe the full extent (over 1,000 pages) of accounts from Canadian military personnel,” Erin Wilson, digital imaging specialist and lab manager, and one of the project coordinators, said.

As interviews and questionnaires were digitized, they went into FromThePage, a user-friendly crowdsourcing manuscript transcription software that supports communication between recruited volunteers and project coordinators, and from there, people from around the world could transcribe those questionnaires, which ultimately end up in CONTENTdm, the Libraries’ content management system for digital archives.

“[For researchers,] to get these to be fully searchable in CONTENTdm, having that transcription really helps,” Suiter said. “If someone is looking for a specific person, which a lot of people are wanting to find a relative, they could put in a specific name and every single questionnaire that mentions that person’s name should come up.”

Through crowdsourcing efforts, like this collaborative project, the Libraries’ team of librarians and archivists hope to empower, innovate, create and push the boundaries of research. For more information, about the panel discussion or working on the project, please contact Suiter or Wilson.