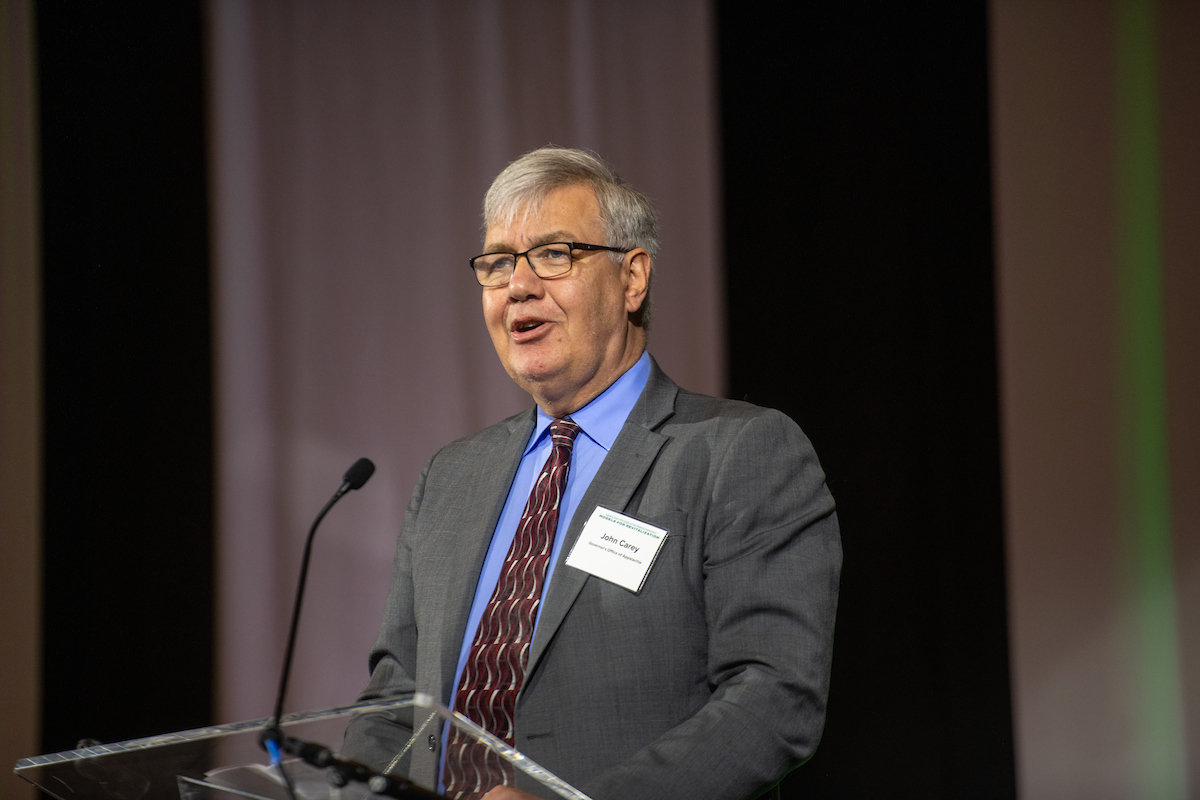 Ohio University graduate and longtime advocate for Appalachian Ohio John Carey has been awarded the John Whisman “Vision” Award for his work making Appalachian Ohio a better place to live and experience.

The Development District Association of Appalachia gives the Vision Award to individuals who, through intergovernmental cooperation, make Appalachia a better place to live. The award caught Carey by surprise; he wasn’t even aware of the award’s existence when he was told he won it. He was nominated by colleague Jeannette Wierzbicki, executive director of the Ohio Mid-Eastern Governments Association.

“It feels very humbling, because I’m not the type of person who receives recognition,” Carey said.

Carey has had a prolific career in Ohio politics since graduating from OHIO's College of Arts and Sciences with a degree in political science in 1981. He is a longtime public servant who has spent his life advocating for Appalachian Ohio. He has held a variety of offices — from mayor of Wellston to the Ohio House and Senate and chancellor of the Ohio Department of Higher Education — and is currently serving as director of the Governor’s Office of Appalachia for the Appalachian Regional Commission at the appointment of Gov. Mike DeWine.

The award recognizes Carey’s work in identifying drinking water for residents of Appalachian Ohio, as well as bolstering its tourism economy.

To address the lack of drinking water, in addition to partnering with the Local Development Districts, Ohio EPA, and others, Carey partnered with the Ohio University Voinovich School of Leadership and Public Service’s Jennifer Bowman, director of environmental programs, and Matt Trainer, a data and GIS specialist, to map lack of water access in Ohio.

“He just asked us a simple question: ‘How many people don’t have access to public water in Appalachian Ohio?’” Bowman said.

Carey partnering with Voinovich made studying this issue possible.

“He was awesome, he had the vision of this from the early onset from when we first met with him,” Bowman said. “It became a nice partnership, we really needed each other and the other partners.”

Prior to the research, there was no public information readily available to answer the question.

“We didn’t have a specific way to address that,” Carey said. Their research concluded that for many places in southern Ohio, people simply don’t have access to water at the pipe.

As a native Appalachian, Carey has sought to build southern Ohio’s tourism — not only for the economy, but also to dispel long-held stereotypes and assumptions people hold about Appalachia.

“We get a lot of publicity that is not positive for our region,” Carey said. “Generally, it is not a positive story, and it reinforces stereotypes.”

Instead, he wants to leverage Appalachian Ohio’s natural beauty to attract people from nearby metros to experience Appalachia for themselves. Due to its abundance of state parks, quaint downtowns and local eateries, he believes the region is the perfect, family-oriented getaway.

Carey has partnered with organizations like TourismOhio to increase publicity for Appalachian Ohio and has been a fierce advocate for places like the Hocking Hills State Park and the Baileys Trail System — both of which have received funding from the Appalachian Regional Commission.

“John has dedicated his career to the people of Appalachian Ohio,” Weinberg said. “Instead of trying to resuscitate the past, he instead identifies areas of untapped potential and looks towards the future. There is no doubt in my mind that John has made Appalachian Ohio a better place for everybody. It would be hard to find a better champion, leader, or person who represents the best of Appalachian Ohio than John.”

Though he has spent four decades advocating for Appalachian Ohio, he continues to look towards the future. As the communities and economies that make up Appalachian Ohio continue to grow and evolve, Carey wants to both preserve the region’s strong cultural heritage, while embracing change by revitalizing downtowns, state parks and historical markers.

“I believe we are at a crossroads,” he said. “We want to keep what is good about Appalachia and find what is next.”