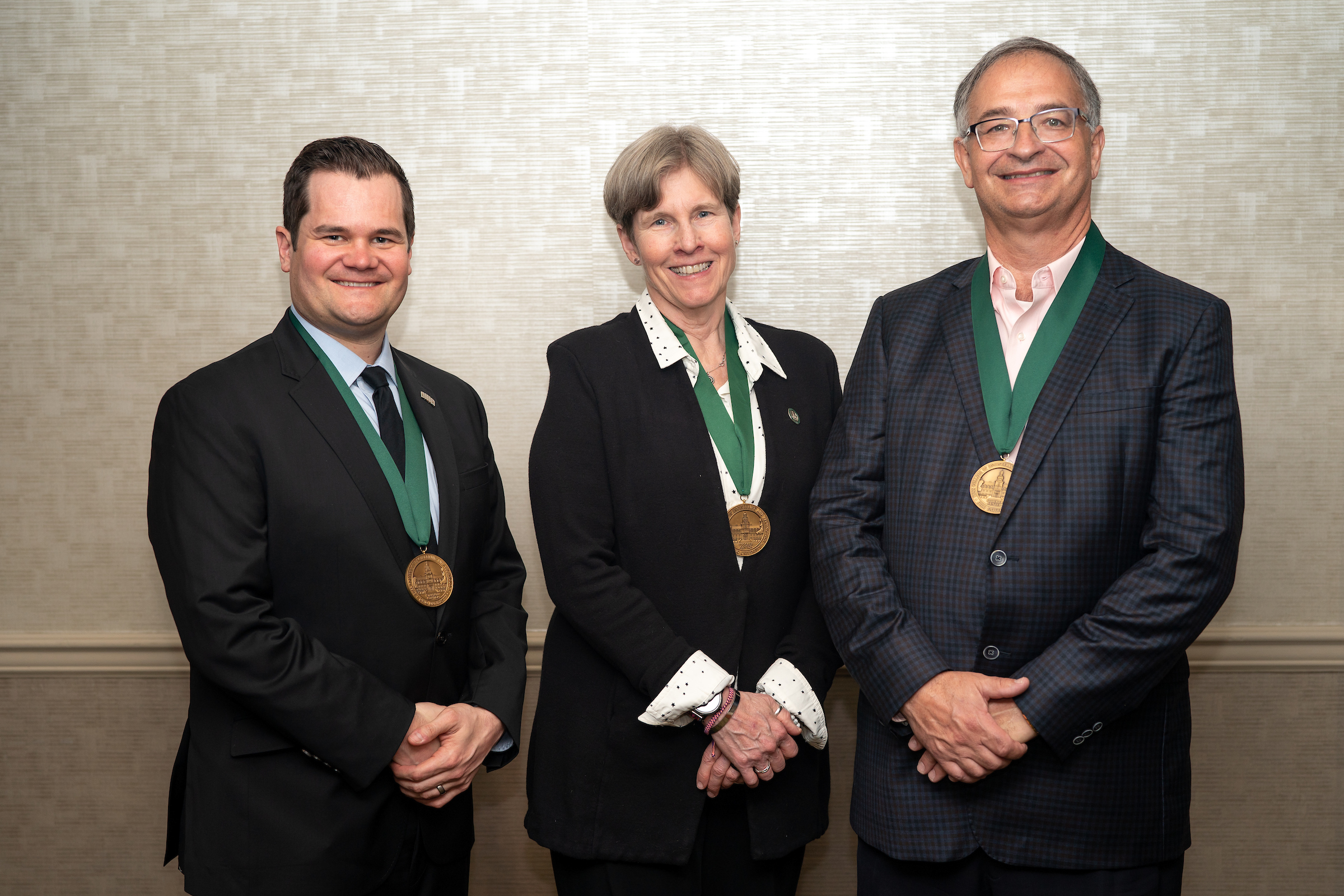 Jake Sigal, MSISE ’04 and BSISE ’03; Angela “Angie” Bukley, HON ’20 and John Crum, BSISE ’85; pose as the newest inductees into the Russ College Academy of Distinguished Graduates. Not shown is Alan Schaaf, BSCS ’10, who was unable to be present for the event.

Dean Mei Wei opened the ceremony, followed by a speech by President Hugh Sherman. Both welcomed the friends and families of the guests, including several current members of the Academy, Dick Dickerson, BSCE ’80; James Edwards, BSCH ’70; Jack Myslenski, BSIT ’73; and Chuck Stuckey, BSME ’66, HON ‘15. Wei and Sherman proceeded to present each honoree in attendance with a plaque and medal.

As a 2020 recipient of an honorary degree from Ohio University, Bukley was the first inductee into the Russ College Academy of Distinguished Graduates.  The impact of her current work as the Principal Engineer/Senior Scholar for the Center for Space Policy and Strategy at the Aerospace Corporation was acknowledged, but her connection to Ohio University spanning nearly 20 years was a focus of her induction.

Prior to her current role, Bukley had a storied career in academia, consulting and research. In late 2003, she joined Ohio University as the Stocker Visiting Professor and transitioned into the role of Associate Dean for the Russ College of Engineering and Technology from 2003 to 2007.

Today, she serves on the Russ College’s Board of Visitors, serving in an advisory role to the college’s leadership. Bukley’s contributions to the Russ College, space industry and higher education demonstrated why she was inducted into the Academy.

Crum has had a storied career in business, leading the Seaman Corporation to decades of growth and success. He was named USA Today’s Top 50 CEO in small and medium size businesses and has been the subject of a “Smart Business” cover story.

He also developed a grow strategy that resulted in the fastest growth in the history of the Seaman Corporation, while maintaining high employee and customer satisfaction. Crum’s excellence in business has allowed him to prosper as a graduate of the Russ College, earning him the title of a Distinguished Graduate.

Lastly, Jake Sigal, MSISE ’04 and BSISE ’03, was inducted into the Russ College Academy of Distinguished Graduates.

Sigal, the current CEO and founder of Tome Software, was honored for being a successful entrepreneur. He has led a team of engineers who develop software solutions for Fortune 500 clients. Tome Software, however, was not Sigal’s first endeavor. He also created Livio, a program that connected smartphone apps to vehicles, which was acquired by the Ford Motor Company in 2013.

Holding more than a dozen technology patents, Sigal was awarded the Ohio University Foundation’s Konneker Medal for Commercialization and Entrepreneurship in 2017. His prowess in the entrepreneurial realm has earned him the distinction of being a 2022 inductee into the Academy.

Sigal was the last inductee of the evening who was honored in person because Alan Schaaf, the fourth and final inductee, was unable to attend the event.

Schaaf, BSCS ’10, is the founder and CEO of Imgur, an entertainment platform populated by user-generated content. Imgur currently ranks among the top 50 Internet properties in the world. The company was launched in 2009, when Schaaf was an undergraduate at Ohio University. His success was recently honored with the Konneker Medal for Commercialization and Entrepreneurship at the 2022 Inventors Awards, where he also accepted his award as a new member of the Russ College Academy of Distinguished Graduates.

The ceremony ended with a celebration honoring the accolades of each inductee. Families, friends, faculty and staff were able to honor the continued success of Russ College of Engineering and Technology distinguished graduates as they continue to be leaders in their respective fields.

For more information on the Russ College Academy of Distinguished Graduates, please see the website.