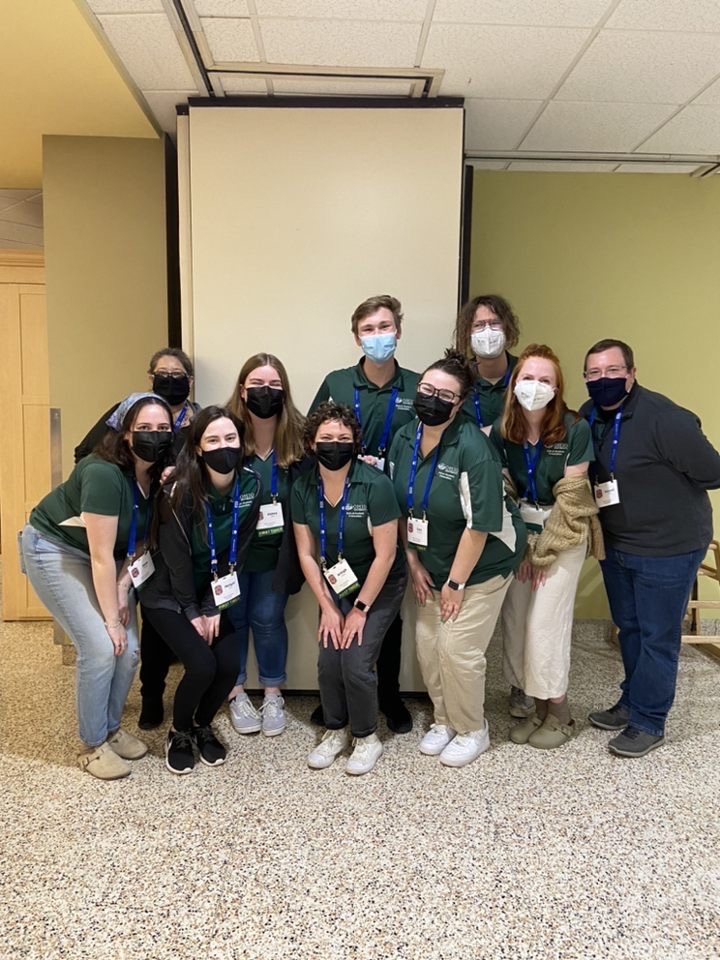 NODA – Association for Orientation, Transition, and Retention in Higher Education region seven awards recognized the work of OHIO students and staff members for their work in OHIO’s Bobcat Student Orientation and first-year programs.

“It’s exciting for our program to be recognized but those are things they all did as individuals,” said Vincent Prior, director of undergraduate orientation programs at Ohio University. “It is definitely validating of the work we’re putting in and the high-quality orientation leaders and graduate assistants coming out of our program.”

Prior nominated Lundgren and Cliffel for the NODA awards — where they competed against other region seven institutions in Ohio, Michigan, Indiana and Ontario, Canada. The nominees were peer-reviewed by staff and graduate students at colleges and universities across the region.

“We wouldn’t have won awards without Vincent’s support or leadership and guidance,” Cliffel said. “I’m very thankful to look up to him and have him as a mentor. He does great work behind the scenes and doesn’t always get recognized enough.”

Although these students studied under Prior, he said the success is all their own.

“Vincent knows how to run a good team and unless you work in orientation you don’t realize what a great leader he is,” Lundgren said. “I think it says a lot about his character that what I took away most from the award was Vincent’s feedback.”

Prior believes one of the things his program has done well is envisioning the process of becoming an orientation leader, which has played a pivotal role in the success of student leaders and staff involved.

“We’ve re-envisioned what training looks like and we’re hiring first-year students, which we hadn’t done before,” Prior said. “The fact we can hire an orientation leader in their first year and they can develop with our program for three years is significant.”

Prior said skilled and engaged undergraduate and graduate students have been pivotal to the success of OHIO’s orientation programs, particularly in light of the changes required during the pandemic.

“For Abbey, her first year was virtual and she came into orientation last summer working in person on a campus she had never worked on. So, she took charge and did some things that most grad students wouldn’t have had to do,” Prior said.

He said that Cliffel took ownership and responsibility in several areas that helped the program excel.

Prior said that Lundgren’s dedication and engagement as a student leader and member of the OHIO community made him a prime candidate for his award. He said the NODA nomination was a way to give Lundgren’s work the higher recognition he felt it deserved.

“Jake is a very active student leader and very engaged in a lot of things,” Prior said. “He stood out because he’s just a positive influence. He’s a great role model to have for other students on the team.”

This summer Lundgren and Prior will lead the first fully in-person Bobcat Student Orientation since 2019, while Cliffel will take on a full-time first-year programs role with Syracuse University in New York.