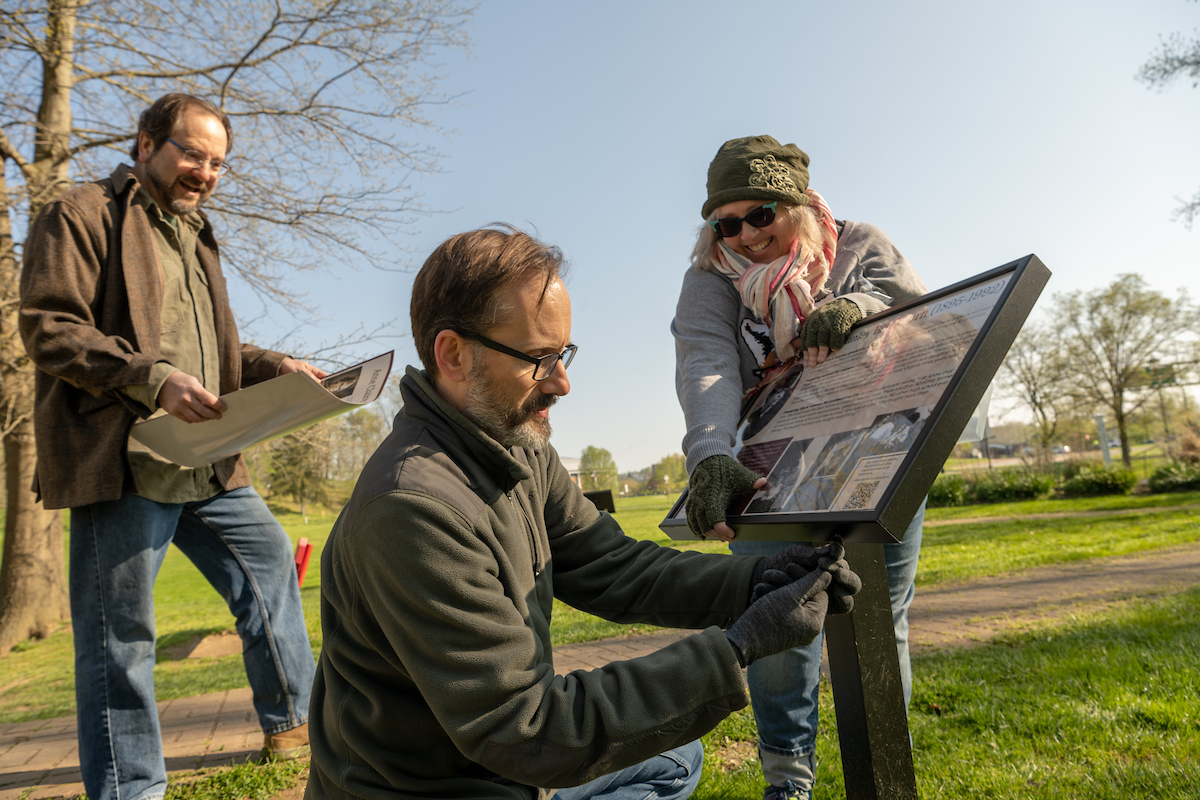 Educators, authors and artists are just a few of the people from Southeast Ohio's past and present who will appear on new Humanities in the Park display panels at the city of Athens' Richland Avenue Park.

The first exhibit — Women Promoting Education in Southeast Ohio — debuts in early May and tells the stories of diverse, notable women who have promoted the educational mission of Ohio University, the Athens community, and the state, from the 1840s to the 1980s.

"The interactive exhibits will change every few months, exploring different perspectives on how the humanities have shaped Athens and Southeast Ohio and how they continue to be an important part of our daily lives and heritage," said Fred Drogula, the Charles J. Ping Professor of Humanities in the College of Arts and Sciences and director of the Charles J. Ping Institute for the Teaching of the Humanities.

"Additional exhibits will explore the growth of the humanities from the perspective of the Black Americans who studied and worked here as well as Native Americans' contributions to Ohio, from mound building to modern voices. We'll also trace the central place and importance of the humanities from the University's founding, mission, and early history to the Carnegie Library to our modern community," added Drogula, who teaches classics at OHIO.

Humanities in the Park is a collaborative project made possible, in part, by a grant from Ohio Humanities, a state affiliate of the National Endowment for the Humanities.

Multiple local organizations are coming together to create the exhibits, with the Athens Department of Arts, Parks and Recreation and the Athens County Public Libraries playing key roles in designing and maintaining the exhibits, which are written and researched by humanities faculty in the Ping Institute. The Ohio University Libraries, in particular the Mahn Center for Archives and Special Collections and the Digital Initiatives Department, also are substantial contributors to this effort to highlight the humanities. The Central Region Humanities Center at Ohio University also is supporting the project.

In addition to the displays in the public park, Humanities in the Park materials also will be available on its website.

"We want this work to be an ongoing resource for teachers and families as they explore Ohio's history through the lens of different times and diverse people," Athens County Public Libraries Director Nick Tepe said. "The library is looking forward to continuing to feature local scholars, writers, and artists in our region with these exhibits for a long time to come."

The women in these displays, so important to the history of Southeast Ohio, lived and worked in different times. They lived during times of war — the Civil War, the world wars, the Vietnam War, and even the Cold War. And they were early parts of social movements that still ring true today — women's rights, civil rights, and peace.

“Among the legendary women on these display panels, you can find a singer and actress, the first woman to join Ohio University's faculty, and an early advocate for women's education," said Katherine Jellison, professor of history in the College of Arts and Sciences and director of the Central Region Humanities Center. The center, created in 2001 with support from a National Endowment for the Humanities grant, is setting out to establish strong ties with academic programs, provide student experiential learning opportunities, support graduate and undergraduate students, and engage with community organizations.

Becca Lachman, communications director for the Athens County Public Libraries, noted that the displays are interactive, informative and fun for any age.

"Hats off to our graphic designer, Heather Johnson, who has helped design the displays as a bit of a treasure hunt, with clues about what to find on various panels and QR codes that link to additional resources online. I encourage you to enjoy materials such as Margaret Boyd’s diary and the very first Report on the Status of Women at Ohio University, which set the stage for implementing Title IX at the University," Lachman said.