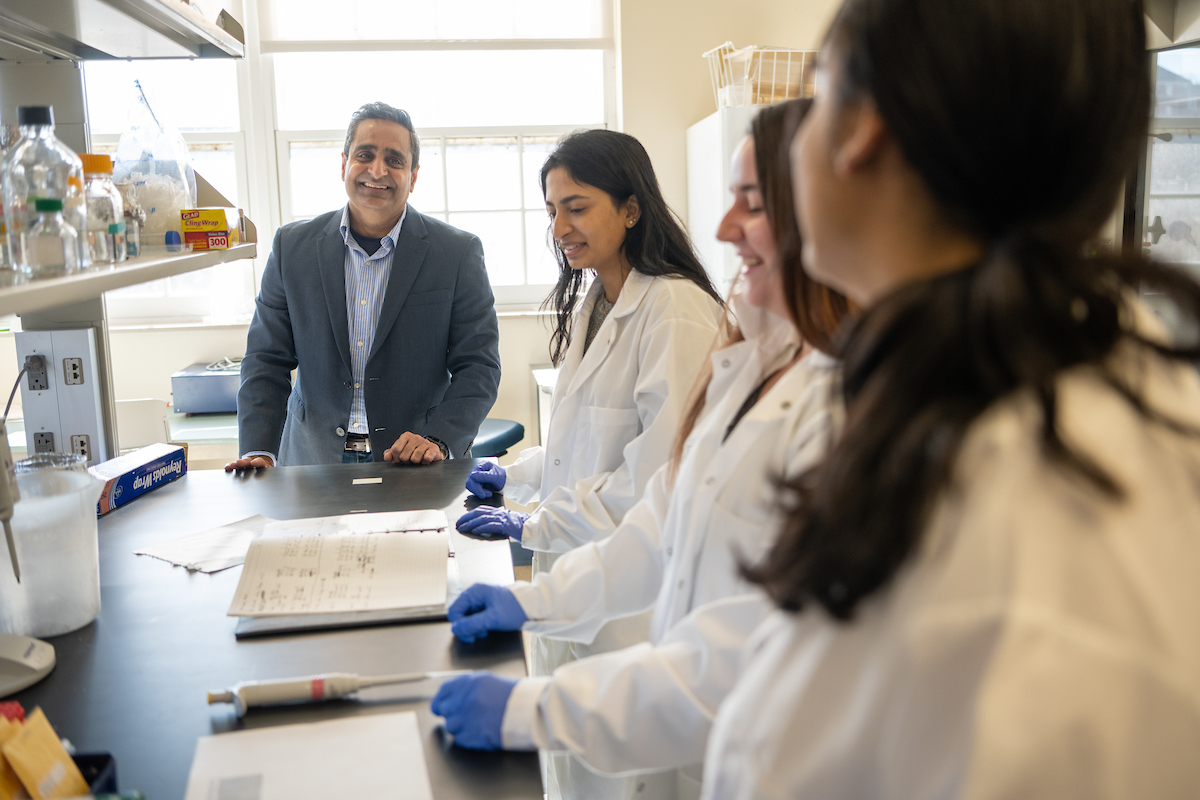 Nearly a decade ago, the Heritage College of Osteopathic Medicine received a comprehensive external review that included some ideas on ways to improve the college’s research profile while maintaining or even enhancing its teaching quality.

One of them was to consider hiring faculty members in groups, or “clusters,” designed to not only attract high-quality talent, but to ensure incoming faculty members had research partners ready to go, too. The Heritage College has completed three of the so-called cluster hires to date and so far has found success.

The intent of the hires was not to find people to teach specific classes, but rather to recruit the best scientists to Ohio University, often with an 80% focus on research. The first such hire, in 2014, brought four researchers into the Diabetes Institute, and all of them hit the ground running, obtaining significant grants and helping to build collaborative research more into the college’s culture, said Calvin James, Ph.D., associate professor and former interim director of the Diabetes Institute.

“The success of that hire is not just the funds they brought in – that’s easy to see – but it created one of the things we wanted, which was the idea of collaborative research,” James said. “Those people got together and they really helped each other in terms of grant-writing, mentoring each other, and they stepped out of the group to look for collaborations outside of that cluster.”

Puri, who came to OHIO from the Boston University School of Medicine, was intrigued by OHIO’s commitment to improve its research, though he didn’t know at the time it was going to be a cluster hire.

“I learned that OU wanted to grow big in research. You can never go wrong when you go to a place that is trying to develop,” Puri said, adding that the support, including salary support, OHIO offers removes the stress of handling non-research obligations. “You will basically be spending all your time doing real science.”

The four, along with others in the college, have worked together on a number of grants since coming to OHIO, but being hired together was beneficial, Lee added.

“We’re all really aggressive in pursuing research funding. When we got here, we were all in the same boat,” Lee said. “Setting up a lab is not a trivial matter; it’s intensely labor- and time-consuming. The fact that we were all working together really aided us in getting started here at OU.”

James credited the group with helping to shift the culture toward more intensive research, showing that it could be done while maintaining the teaching quality. Puri and Lee both said they think it helped being part of a group, as opposed to coming in one at a time.

“The culture of this institution was teaching. They’re doing a great job, no doubt about it, but now they have research scientists who are just into science with a minimum teaching load,” Puri said. While there were previously several researchers at the university with grants, not many had funding from the National Institutes of Health, considered a marker of research productivity and success. That has changed, and more scientists at the university are now pursuing and getting those grants, he said.

“The success of the those in the cluster hire was important. They brought in a lot of money; they continue to bring in funds. They’re very productive researchers,” James said. “That culture shift has been really significant, and the success speaks to the fact that this is working. Hats off to the Osteopathic Heritage Foundation for providing the funding.”

All of the cluster hires were supported by the Osteopathic Heritage Foundation’s Vision 2020 award.

Students are also part of the equation demonstrating the effectiveness of the cluster hire concept. Puri said he has five students, including undergraduates, working in his lab, and many of the other researchers are also working directly with students in the research process. Having a strong research program helps OHIO attract top quality STEM students.

The cluster hire was successful enough that the college did another one in 2020, this time adding several new faculty members to the OHIO Musculoskeletal and Neurological Institute (OMNI). Working with a hiring committee spanning multiple colleges and without worrying about where the new faculty members would even fit within the academic departmental structure proved helpful, said Brian Clark, Ph.D., director of OMNI and Osteopathic Heritage Foundation Harold E. Clybourne, D.O., Endowed Research Chair.

“It was all about, we want to build science and portfolios and grants and impact. Every single person that we gave an offer to accepted,” Clark said. Once they were hired, they were assigned to departments – the Heritage College’s Department of Biomedical Sciences got three (Nathanial Szewczyk, Ph.D., Cory Baumann, Ph.D., and Shouan Zhu, Ph.D.), with one in the College of Health Sciences and Professions’ (CHSP) Department of Physical Therapy, Dustin Grooms, Ph.D, who transferred from another department in CHSP.

Cluster hires take a lot of collaboration and buy-in across colleges and departments. OHIO's institutes are often the common thread tying everyone together, and most research grants at the University funnel through them, but they can’t make hires independently, Clark said.

The OMNI cluster hire also hit the ground running, Clark said. Szewczyk, who was also named Osteopathic Heritage Foundation Ralph S. Licklider, D.O., Endowed Professor in Molecular Medicine, brought grants with him, while Zhu hit a pair of foundation grants his first year, and Baumann won a new investigator of the year award from the American College of Sports Medicine.

“With the cluster hire idea, there’s various models of how you can run research, but generally speaking, when you do things alone, it can be much harder than when you do things together,” Szewczyk said. “That really provides a support network for people and provides a critical mass so there’s enough expertise there that you can grow.”

Coming in during a pandemic didn’t help matters for some, Szewczyk said, but in some ways, it allowed him to focus, and he obtained two new grants from NASA during the first year.

“I don’t think that I would have expected to have any money coming in during my first year here, so to get two grants from NASA is very unexpected,” he said. He works routinely with Baumann and Zhu, which he said helped them all settle in at OHIO.

“We communicate on a daily basis,” Zhu added. “We go through lots of failure… to be able to talk to someone, that really helps to get things together for next time.” Working with more experienced researchers like Szewczyk and Clark has been tremendously helpful, he added. He has also collaborated with Puri and with John Kopchick, Ph.D., Goll-Ohio Eminent Scholar and professor of molecular biology at the Heritage College, on grants.

Gutierrez said the notion of hiring in clusters was attractive to her, as it provides plenty of opportunity for collaborations. Muniz-Terrera said she was intrigued by coming in as part of a cluster.

“We already have topics in common. We have already been meeting and discussing grant applications,” Muniz-Terrera said. As much as anything, though, she came to Athens because she kept interviewing with people who never intended to stay in Athens long-term, but did. “To me, that made the difference.”

She’s not alone in that sentiment. OHIO, recently named a Carnegie R-1 Classification research institution, has certainly grown its research capability and emphasis, but the professional and community atmosphere is still a top draw.

“When I came here, I wasn’t sure if I would be staying or going. Now I can say, Ohio is our home, to be honest,” Puri said.