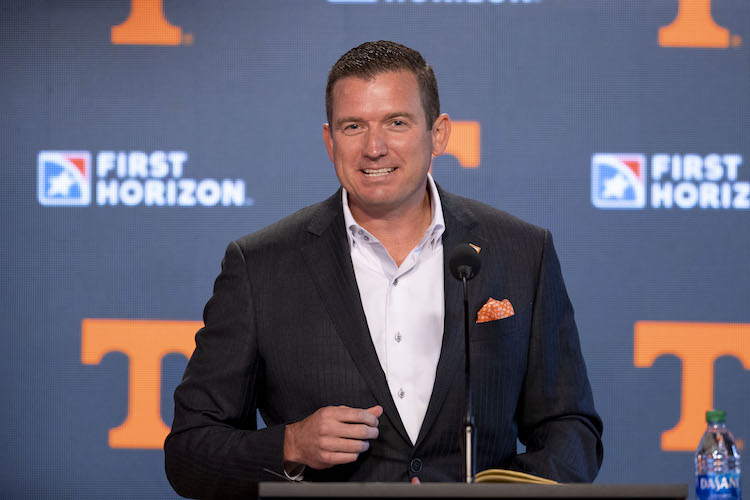 The Ohio University AECOM Center for Sports Administration is proud to announce Dr. Daniel J. White as the Charles R. Higgins Distinguished Alumni Award recipient for 2022. White graduated from Ohio University’s dual-degree MBA/MSA program in 2005 and currently serves as vice chancellor/director of athletics for the University of Tennessee.

White, who is the 41st recipient of the award, will receive the honor on Friday, May 6 during the 2022 OHIO Sports Administrion symposium banquet.

The Charles R. Higgins award is given each year to a recipient who honors the legacy, leadership, and spirit that Higgins has embodied for more than 50 years.

Higgins played a pivotal role in shaping the Department of Sports Administration and cultivating the OHIO Family. To honor his influence and years of service, the award is presented to an alumnus who exemplifies a high level of excellence in their field.

White’s career in college athletics has roots in Athens as he served as OHIO’s Men's Basketball director of operations while completing his MBA and MSA degrees. He continued to work as an assistant coach for the Bobcats before transitioning into athletic administration and development at Northern Illinois.

While in his first role in athletic administration at Northern Illinois, White agreed to bring on the first OHIO dual degree fellow to mentor prior to the start of their degree program. This mentorship paved the way for Bobcats for years to come, growing into a staple opportunity for those in the OHIO Sports Administration program.

“Danny White represents all of the criteria we look for in honoring alumni with our Charles Higgins award,” Matt Cacciato, executive director of the AECOM Center for Sports Administration and leader of OHIO's MSA program, said. “His commitment to our program in the form of engagement, innovation and hiring is outstanding. His record of recruiting and mentoring Bobcat graduates at each of his professional roles in college athletics is exemplary. Further, he has an outstanding record of building successful athletic programs focused on developing high achieving student-athletes, coaches, and staff.”

White’s experience in college athletics and forward-thinking approach to leadership propelled him through the ranks in the development space before transitioning to a leadership role as the senior associate athletics director at the University of Mississippi in 2009. White also earned his doctorate degree in higher education from Ole Miss in 2016.

“The OHIO Sports Administration Program is truly one of a kind and an organization that has had significant impact on the sports industry globally,” White said. “Shawn and I started our family in Athens and will always cherish our time as Bobcats! I will be forever grateful for the strong foundation that the program provided me – it was an incredible learning experience and has proven to be a powerful launching pad for my career. This recognition is extremely humbling, and I would like to recognize that there are many alums that I work with on a daily basis and turn to for advice that have helped me get to my current position and have been a huge resource throughout my career. It is the people that make Ohio Sports Ad special – faculty and students – we feel so fortunate to be a part of it all!”

Seen as a leader in the ever-evolving landscape of college athletics, White’s accession to the top has not come without hard work and a strong vision and commitment to position his athletics departments for both academic and athletic success.

His excellent leadership is widely acknowledged by industry professionals and has earned him numerous accolades such as the NACDA Under Armour 2019 Athletics Director of the Year, a Sports Business Journal 40 Under 40 honoree in multiple years, and being named one of the six most influential people in sports business.

White has also fostered mutually beneficial relationships with AECOM in the expansion of athletic facilities both at Ole Miss and UCF, to invest in the betterment of the student athlete experience.