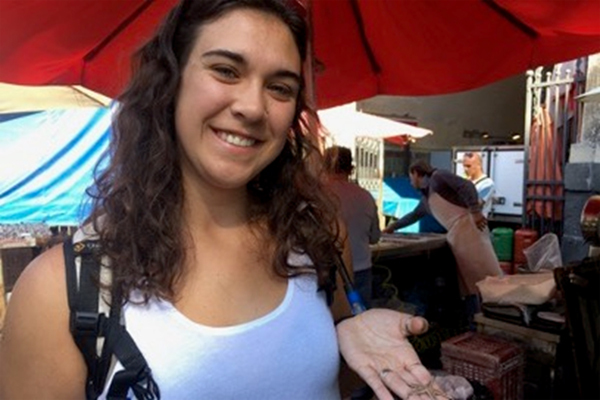 Breanna Oswald holding a tiny starfish at the fish market in Catania, Sicily

Ohio University alumna Breanna Oswald says a study abroad experience changed her life when she realized that family and culture can revolve around food.

On her day off during the Food in Sicily study away program, Oswald decided to take a train from the island of Ortigia, where the Ohio University students were based, to the town of Enna in the center of Sicily.

Oswald had decided to go to Enna not because of the immense beauty of this ancient Roman citadel on a plateau 1,000 meters above the Dittaino valley, but because her relatives from the Restivo side of her family lived there.

“I had never met them before,” Oswald explained. They spoke no English, so their neighbor called up her granddaughter who works as translator in Germany. “Of course, she couldn't stay on the phone the entire time, so the rest of the time we shared food, and we shared our emotions through the food. They were so happy to share what they had grown from their garden in a meal, giving me hugs and kisses. We all cried. And we had never even met before. It was just amazing,” said Oswald, who earned a B.S. in Child and Family Studies from the College of Health Sciences and Professions in 2017.

Of course, not everyone on the Food in Sicily program experienced such intense encounters, but Sicily is a most convivial of places for visitors. And food is often at the center of Sicilian culture.

“I feel that a lot of people in Sicily are just so welcoming,” Oswald said. “Wherever we stayed, wherever we dined, wherever we went, people were so open. I think I gained a really good perspective on how we have to be culturally competent. I was with such a good group. We all kind of kept in mind that we really wanted to just fully immerse ourselves into the culture and feel like we could be a part of it, you know, even as Americans, just try to be as Sicilian as possible.”

For Oswald, the daily food activities brought her closer to Sicilian culture.

Food in Sicily is a faculty-led program for Ohio University credit. In OHIO credit programs, students earn OHIO credit, travel with an OHIO faculty or staff member, and travel and take courses with other OHIO students. A student's full financial aid package applies the same as it would for on-campus courses. Food in Sicily is open to both undergraduate and graduate students. (Students interested in the Food in Sicily study away program, scheduled for May 6 through May 26, 2022, are invited to attend an Info Session via Teams.)

The experience includes visits to markets and sites in Ortigia, Italy, including the Catacombs of San Giovanni, the medieval Jewish quarter, and Castello Maniace. Day trips take students to Catania, Italy, where they can visit the fish market, historic city center, Benedictine Monastery, Greek Theater, and the Cathedral. Students also can hike on Mt. Etna and enjoy time on Sicilian beaches as well as tour the historical towns of Noto and Taormina.

“The things that we did with our daily activities, being able to go and learn about the culture and see different sites was amazing,” she said. “But even better was how it connected to the food activities that we did. So when we learned about a certain place, we learned about its food traditions and why that was so important to know to understand the places we visited. It was just so interconnected. I felt there was this interconnectedness everywhere because you would go to the fish market, and then later, you might eat that fish, and then you would have learned where they catch that fish and why the fish came to be so popular in that area. I felt that that the experiences were so authentic, like the time we made mozzarella and when we made pizza with real ‘nonnas’ (grandmas).”

Oswald appreciated the pace of the activities and the tempo of her time in Sicily. “There was so much that we got to do,” she noted, “but we never felt rushed. We spent a good amount of time in each place we were. We got to really take our time and connect with the locals. We weren't just someplace and then quickly leaving. And we had a lot of fun in our down time. We were able to go to beaches, and we had free days, which were great. And you were able to do what you wanted outside of the itinerary for the day and explore each little area or town you were in. And that was really cool to just kind of wander and not have a plan and just do what you wanted. I just loved every part of it.”

And for Oswald, Ortigia, was the perfect location for the program. “We stayed right in town on the island of Ortigia. Everything was walkable and close. There is no motor traffic on Ortigia. I loved how much walking we did. I did not gain any weight despite all the wonderful food I ate. We walked so much that I think I actually lost some pounds. And even if we had a long trip, the bus was enjoyable. We all just relaxed until we got there. And it was totally worth it wherever we were going; whatever the destination was worth the trip.”

What advice does Oswald have for anyone thinking about going on the program?

“At the beginning, I was really hesitant about choosing the program because it didn’t seem to connect to my major, Child and Family Studies. But I chose the Food in Sicily program precisely because it was different. There was just something so compelling about being able to choose a program through which I could fully immerse myself in the culture through the food the people ate. I felt that that was the most authentic choice.”

“And, of course,” Oswald added, “it was nerve wracking to think about going overseas for my first time. And I was I was definitely anxious. But at the end of the day, I know that there was a reason I chose something different. Because I think that having that variety in life is so important. You have to branch out, you have to choose the things that you're scared of. And as soon as I was in Sicily, I wasn't homesick. I was I fine. I wanted to stay. I wasn't even ready to go home when it was time."

Oswald noted that taking a different path "changed so much of the way I now approach life. I've been able to shape my life around the idea that I can connect with others around food. I think that that was a big driver of why I chose my grad program at OHIO. I had to decide between a master’s of global health or public health. I chose public health precisely because I could connect with people through food.”

“The Food in Sicily Program was awesome,” Oswald concluded. “It changed so much about the way I see the world. And I have my cousins in Enna! I stay in touch with the younger ones through social media.”