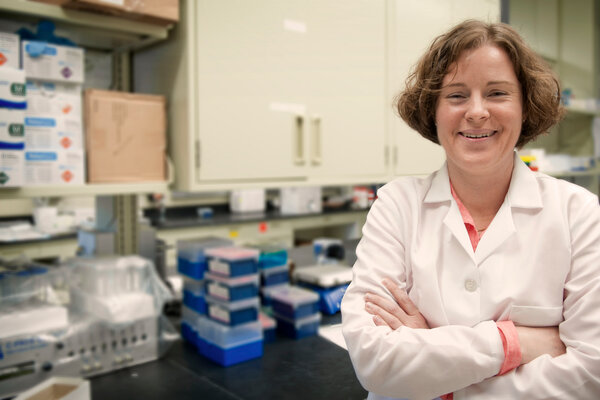 Ohio University’s Leslie Consitt, Ph.D., will lead a study to identify cellular mechanisms in muscle that contribute to disease and physical disability related to insulin resistance as people age.

Insulin resistance is one of the most prevalent health issues facing Americans over 65 who have type 2 diabetes. The project is funded by a three-year, $453,000 grant from the National Institutes of Health.

Consitt is the Osteopathic Heritage Foundation Ralph S. Licklider, D.O., Endowed Faculty Fellow in Enhanced Metabolic Aging and associate professor of physiology in the Heritage College of Osteopathic Medicine's Department of Biomedical Sciences. She and her team will take a translational research approach by examining how metabolic pathways differ in the skeletal muscle of young individuals versus older adults. They will then manipulate specific proteins of interest in a human skeletal muscle cell culture system to measure the direct impact of these proteins on insulin sensitivity.

“Getting older is inevitable for all of us,” Consitt said. “While we can’t change that fact, we can attempt to prevent the development of chronic disease and physical disability that commonly accompany the aging process. This project will help identify mechanisms in the muscle that contribute to age-related disease and dysfunction so that appropriate interventions and treatments can be prescribed to the general public. We hope to promote healthy aging.”

In young healthy individuals, circulating insulin binds to skeletal muscle receptors, activating a series of proteins known as the insulin signaling cascade that allows glucose to enter the muscle, lowering blood sugar levels. However, Consitt and her team previously found a protein located at the end of the signaling cascade (AS160 protein) that does not work properly in the skeletal muscle of older individuals, resulting in impaired glucose uptake and insulin resistance.

Whereas most previous research has focused on the mechanisms responsible for “activating” this AS160 protein, Consitt hypothesizes that “inhibitory” mechanisms are upregulated in older adults, preventing the ability of insulin to work properly on this protein. She also hypothesizes that the glucose that does enter the muscle of older adults is not efficiently utilized.

“As we get older, impairments in both the ability to store and burn glucose in the muscle leads to increased lactate production, which further contributes to insulin resistance,” Consitt said. “We propose to investigate why and how this imbalance occurs in skeletal muscle of older individuals and aim to identify cellular mechanisms contributing to age-related insulin resistance so that subsequent research can develop effective interventions.”

According to Consitt, the number of individuals over the age of 65 is expected to double over the next 30-40 years, putting an increasing strain on healthcare services.

“One of the most prevalent health issues associated with aging is insulin resistance, with approximately one-third of Americans over the age of 65 suffering from type 2 diabetes,” Consitt explained. “Given the increase in population age over the next few decades, the number of older adults suffering from insulin resistance and type 2 diabetes will skyrocket unless preventive treatments are undertaken.”

Consitt will work with the Ohio Musculoskeletal and Neurological Institute (OMNI), the Diabetes Institute, and the Clinical and Translational Research Unit (CTRU) on the project. The research team also includes Dr. Janet Simon, associate professor in the College of Health Sciences and Professions, who will provide statistical support as the director of biostatistics and research design with OMNI; Dr. Anton Wagenmakers at Liverpool John Moores University in the United Kingdom, who will assist with measuring immunofluorescent glucose transport in young versus aged skeletal muscle; and researchers from the University of Dundee in the United Kingdom and the Indiana University, who will utilize custom-generated antibodies to target novel protein modifications. OHIO students will also have the opportunity to be involved in both clinical and bench research related to the project.

“Leslie’s work is crucial, as it sits at the nexus of age-related loss of muscle tissue function and obesity,” said Dr. Brian Clark, Osteopathic Heritage Foundation Harold E. Clybourne, D.O., Endowed Research Chair and OMNI executive director. “When one looks at the demographic shifts occurring in the United States – the graying of the nation and the obesity epidemic – they quickly realize that, societally speaking, we have two ships about to collide. Leslie’s work will help unravel the complex mechanisms underlying age-related changes in glucose regulation, which is the first step to developing therapeutic interventions. Her grant was scored in the top 1 percent of the applications reviewed by NIH, which is a huge compliment to her and attests to the world-class work she is doing.”