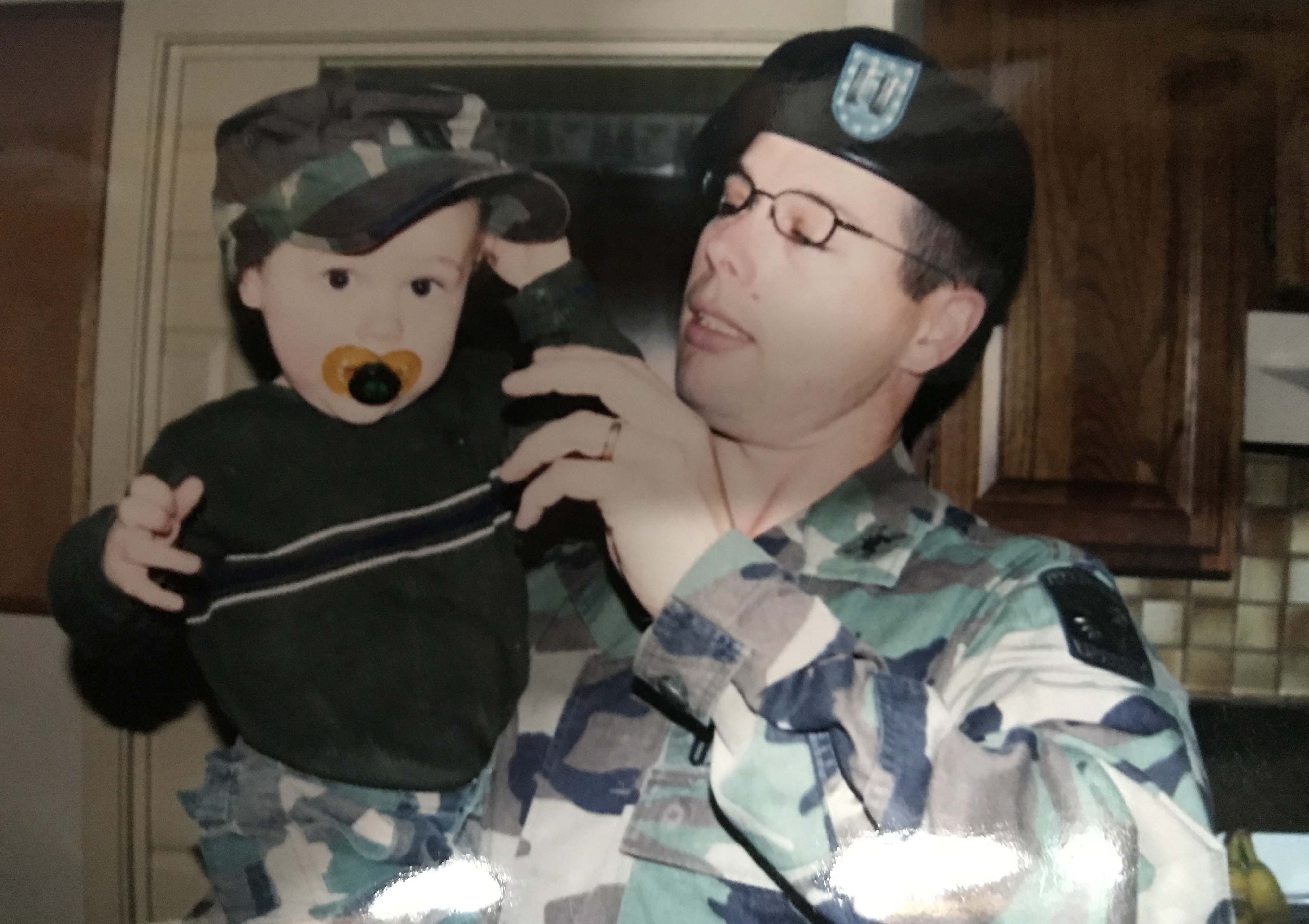 Two of retired Army Maj. Tony Eaglowski’s three children were born in Athens during the four years he was stationed at Ohio University, where he served as assistant professor of military science and training and operations officer for OHIO’s Army ROTC program and earned a master’s degree. This fall, the youngest of those children, Trae Eaglowski (pictured with his father), embarked on his own but similar OHIO journey, becoming a first-year cadet in the Bobcat Battalion and pursuing his OHIO degree.

On Nov. 11, Americans across the country will observe and celebrate Veterans Day, honoring those whose love of country inspired them to serve in the U.S. military. For the newest class of cadets in Ohio University’s Army ROTC program, affectionately known as the Bobcat Battalion, love of country—and love for OHIO—literally runs in the family.

One-fifth of this year’s 25 first-year Bobcat Battalion cadets are following in the footsteps of their family members, enrolling in Ohio University and taking their first steps toward military service.

“The fact that we have this many family members coming to Ohio University—and their families reconnecting with the University in this way—tells us that we’re doing something right,” said Maj. Darrell Fawley, MPA, MSS ’15.

A second-generation Bobcat himself, Fawley returned to OHIO in the summer of 2020 to serve as the professor of military science and chair of the Military Science Department, commanding the Bobcat Battalion. Fawley served as operations officer and assistant professor of military science for the Bobcat Battalion from 2013-2015. He noted that while family ties in the OHIO program have occurred in the past, the family connections this year are more numerous and diverse, ranging from mothers and fathers to siblings and cousins.

First-year cadet Trae Eaglowski of Massillon was born in Athens in 2002 while his father, retired Army Maj. Tony Eaglowski, was in the second year of a four-year assignment at Ohio University as assistant professor of military science and training and operations officer for the Bobcat Battalion—and pursuing a master’s degree.

“We fell in love with the campus and the people,” Maj. Eaglowski, MBA ’04, recalled. “It’s such a wonderful, diverse and welcoming place, and it feels like family when you’re there.”

Maj. Eaglowski joined the Ohio Army National Guard in 1986 – both as a means to help pay for college and to give back to his country like a couple of his relatives had. He earned his commission as a U.S. Army officer through the ROTC program at the University of Akron and over the course of his military career was deployed overseas twice – to Kuwait in 2008 and Afghanistan in 2012.

While he enjoyed his time at OHIO, Maj. Eaglowski noted that he never sought to encourage any of his three children to join the military or go to any particular university.

“I wanted it to be their decision,” he said. “I just want the best for all of my kids. But it is nice that Trae and I have this shared experience. We’ll both be Bobcats forever!”

For Cadet Eaglowski, who is majoring in history at OHIO, his decision to pursue a career in the military wasn’t based on his father’s experience but rather an upbringing that emphasized the importance of service in general.

“I was raised with a sense that I should be giving back to my community and leaving things better than I found them,” he said, noting that after he completes his military service, he has dreams of running for local public office and working within the community.

He said his decision to enroll at OHIO was based on the strength of the University’s history program, the beauty and community-oriented feel of the campus, and the reputation of the Bobcat Battalion.

“I had heard, from my father’s experience as well as the rankings nationally, that it was one of the best ROTC programs in the country,” Cadet Eaglowski said.

OHIO’s Army ROTC program, which is celebrating its 85th anniversary this year, was presented the 2017 McArthur Award, recognizing the top eight out of 275 ROTC programs in the nation. And, earlier this year, Ohio University was named to the 2021 Military Friendly Schools® list. It’s a distinction that OHIO has earned for the 10th consecutive year and is awarded to colleges, universities and trade schools across the country that are doing the most to embrace America’s military service members, veterans and dependents as students and ensure their success on campus.

With only several weeks into the Bobcat Battalion, Cadet Eaglowski is already seeing why the program is so successful.

“I think fundamental to the success of this program over the years is the sheer amount of support that it receives,” he said. “Cadets and cadre talk regularly about how other programs don’t really have the same opportunities that we get here.”

Among those opportunities, Cadet Eaglowski noted the access the program has to campus facilities and land at The Ridges for training and exercises as well as the family atmosphere the Bobcat Battalion cultivates.

“It’s a lot like a family,” he said. “You get a wide range of people and a wide range of backgrounds, cultures and communities, … but we’re all joined together by this shared background of wanting to pursue a career in the Army. One of the things that the program does that’s great is they take all the (first- and second-year cadets) and they put them in the same dormitory, and that helps with bonding. You live with these people, so you get to know them, and you see them every day. That really motivates interaction and develops a family-like culture.”

His son’s experience echoes the same experience Maj. Eaglowski had at Ohio University 20 years ago.

“When I was working there, I always thought the University and the Bobcat Battalion worked really well together,” said Maj. Eaglowski. “I felt that the University supported the ROTC programs, both Air Force and Army, and that both programs tried to support other groups on campus as well.”

He noted the programs’ activities with University athletic teams and the encouragement cadets received to be involved in different activities, clubs, and programs – and “to experience as much of the campus as they could because we wanted them to be really well-rounded.”

Maj. Eaglowski said he was happy to see that same spirit on campus today, pointing to how the ROTC cadets help with student move-in and the campus collaborations he saw during this year’s Parents Weekend.

“I think the family atmosphere is something that is really strong within the ROTC, but I think that’s also a reflection of the University overall,” he said. “Whenever I’ve run into someone who’s graduated from OU or who has a kid going to OU or anytime I interacted with the faculty or the administration when I was working there, I felt like I was talking to a friend. It’s hard to describe to someone who hasn’t been a part of it, but it is a family. … Maybe I’m biased, but in talking to others, I think we have something very, very special at Ohio University that we can all be grateful for but also be a little bit proud of.”

It was Maj. Fawley’s own Bobcat family ties that initially brought him to Ohio University. His father, Darrell Fawley Jr., BSED ’73, and sister Megan Fawley, BSED ’03, are both OHIO graduates. And it was the experience he had working here and he and his wife, Lindsey Fawley, MSW ’15, had earning their OHIO degrees while he worked here that brought Maj. Fawley back to Ohio University to lead the Bobcat Battalion.

“There’s a lot of people that come to Athens once and they never want to leave,” Fawley said. “I think we fell in love with that same magic that other people do about this campus and consider ourselves Bobcats just as much as anything.”

From the online programs that open the doors of higher education to both active servicemembers and veterans to accessible and supportive faculty and the resources offered through the Brigadier General James M. Abraham & Colonel Arlene F. Greenfield Veterans and Military Student Services Center, Fawley said the support from the University is “incredible.”

“I never found a person that didn’t really want us, which has allowed us to be a part of the fabric of the University,” he said. “There are 275 Army ROTC programs across the nation and all the way to Guam, and not everybody gets nearly what Ohio University provides for our students. … The fact that we have so many cadets following in the footsteps of their family members tells us that we have a really good program that means something to people. It’s very good feedback and a great endorsement.”