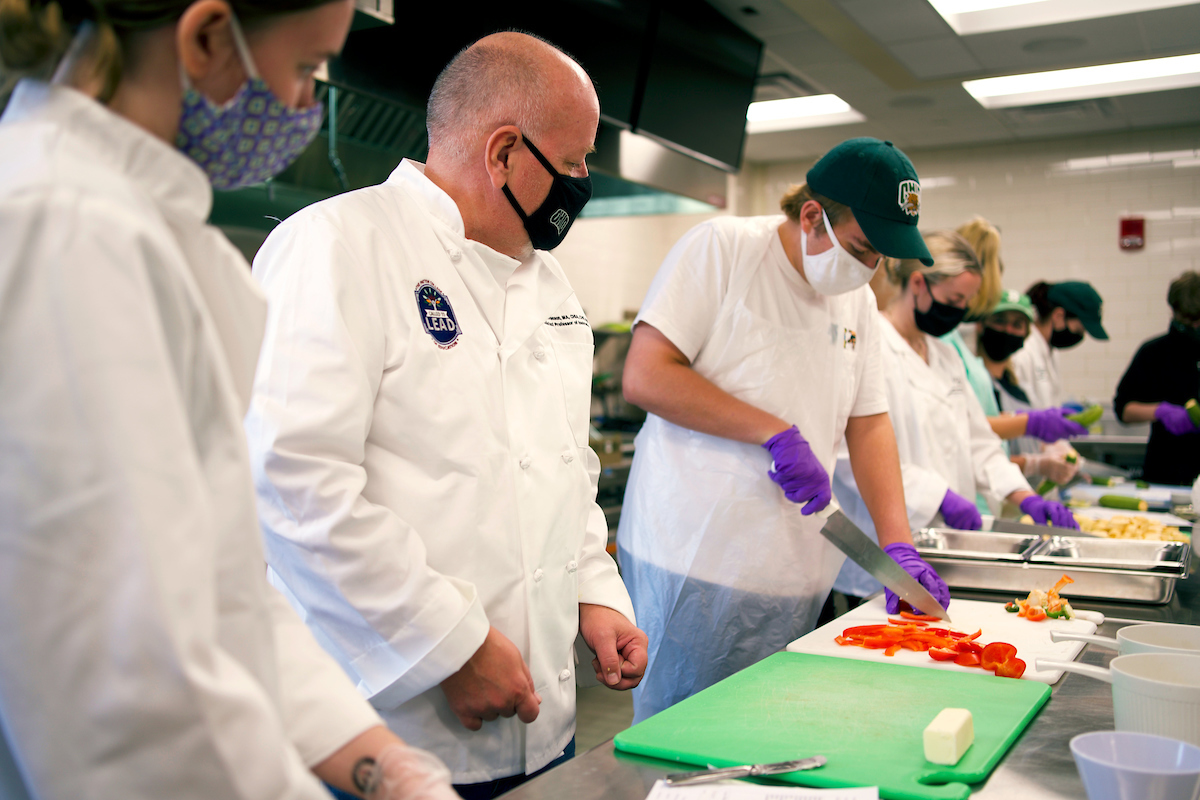 More than 20 Ohio University students from three Restaurant, Hotel and Tourism courses came together for a cultural learning event in The Patton College’s demo kitchen.

Students from RHT 1200 – Food and Culture, RHT – 2990 Intro to Food Production, and RHT 3600 – Catering Operations transitioned from the classroom into the kitchen in order to learn about Haitian food and culture, as well as the current affairs in that country. Afterwards, students signed a poster that said, “We See You,” in support of Haitian students, which was delivered to display in the Walter International Education Center.

“This event gives everyone in the room an opportunity to bring their own understanding to what is a critical world challenge happening not far from our border,” said Thom Stevenson, assistant professor of instruction in the Restaurant, Hotel and Tourism program.

From 10:30 a.m. to 1 p.m., among decorations in the colors of the Haitian flag, students read poems, articles, and reflections about what is happening in Haiti, and they made culturally significant Haitian recipes. They also put the recipes in a standardized format to be able to be used in a production setting.

Catelyn Cox, a sophomore double majoring in French and Restaurant, Hotel and Tourism, attended the event and brought someone who spoke little English but connected with everyone through cooking.

“I led a group of RHT 1200 students and a guest from Ecuador in making a Haitian version of Mac-n-Cheese, as well as a traditional Haitian drink,” Cox said. “I learned about Haitian food and how it differs from American food. I also learned a little about the poor situation in Haiti right now. I appreciated the reading of the poem before the event because it was an actual writing from Haiti.”

At the close of the event, students unpacked the experience and created a list of things they could do to personally impact the situation in Haiti. This included donating to charities, raising awareness, recognizing privilege, educating themselves and others, and sending prayers.

“My goal with this exercise was to create an intercultural and global approach to support resiliency theory, which says that it's not the nature of adversity that is most important, but how we deal with it,” Stevenson said. “Not only did this help students stay abreast of cultural affairs, it created a sense of community — a safe community. And as a result, students were sharing openly about their own lives.”

Stevenson plans to continue these types of activities. Next, he is planning an event on Africa and climate change.