Betty Walberg: The One and Many 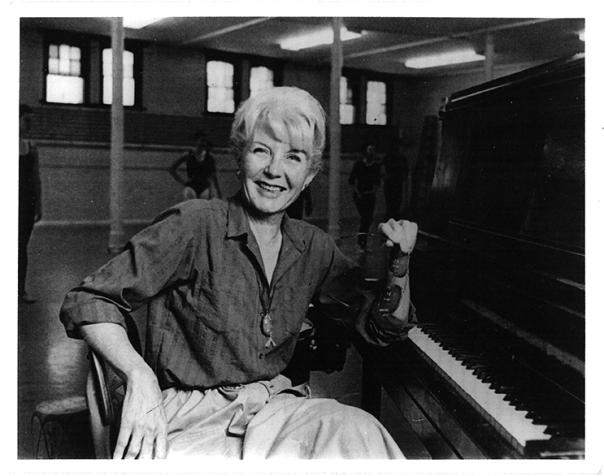 Betty Walberg in the studio at Ohio University with dancers behind her.

There were many Bettys. Arranger and composer of music for dance for Broadway, films and television; consummate pianist; inspiring teacher for two generations of dance students; mentor to young choreographers; dance maker; and card shark to rival the best.

In reality there was only one Betty Walberg. She was a piano prodigy from a small town in Nebraska with the gift of perfect musical pitch who grew to be a woman who would have been comfortable sitting next to Dorothy Parker at New York’s legendary Algonquin Roundtable luncheon group where wit and quip were always the special of the day.

One would be unlikely to find another musician who worked with Barbra Streisand, Fred Astaire and… Martha Graham. When you see the bottle dance in Fiddler on the Roof, or the “The Candy Man” from the original Willy Wonka, both are performed to Betty’s arrangements.

Her most enduring legacy, however, is the young artists she challenged to be critical thinkers, to experiment adventurously, and to appreciate movement and music as inseparable partners.

From 1968 to 1986 she found a home at Ohio University offering workshops in music for dance, providing piano accompaniment for classes, and critiquing student work. Her visits might be only weeks at a time but her presence was always reason to celebrate.

In 2012, recognizing her contribution to OHIO, former students established the Betty Walberg Scholarship, awarded each year to a student dancer best exemplifying the artistic excellence she so valued.

“It is wonderful to know that Betty was a woman who helped pave the way for someone like me who is interested in exploring the relationship of music and dance,” says 2017 winner Lily Gelfand.

Arranging with the Stars

Betty’s love affair with dance began in high school when she responded to a newspaper ad: “Pianist Needed for Modern Dance Club” at the University of Nebraska. She went on to Bennington College in Vermont, a hotbed of modern dance.

There she honed her skills playing for classes taught by faculty and guest artists. At the very first American Dance Festival in 1948, Betty was musician for Graham, the high priestess of modern dance.

Moving to New York, she found employment as a musician at Juilliard where she helped develop their first music for dance curriculum, while also playing for Shirley Wimmer’s classes at New York University. In 1968, Wimmer was to become the first Director of the newly organized Ohio University School of Dance.

Beginning in 1952 with singer Kate Smith’s TV show, Betty began her thirty-year career providing music or vocal arrangements for dance. She would take the composer’s original music and interpret and adapt it for the newly created dance segments working closely with the choreographer. This often required her to compose new or expanded musical material.

Her most important Broadway collaboration was with Jerome Robbins, working with him on the original productions of West Side Story, Gypsy, and Fiddler on the Roof. She was pianist and music advisor for Ballets USA, his touring company. When Robbins’ “The Concert,” a riotous send-up of classical music was performed by his troupe, the beleaguered on-stage pianist was the redoubtable Betty Walberg.

In 1961, she went to Los Angeles for the movie version of West Side Story working until the early 1980s in films and television including Dr. Doolittle, Willie Wonka, Funny Girl, Funny Lady, and Fred Astaire and Mitzi Gaynor TV specials.

Betty returned to the academic world in the late 1960s, eventually exploring her own creative impulse by composing music and making dances, two for OHIO faculty.

Over time, Betty became disenchanted with film and television.

She had spent years on Broadway often with artists she might dislike or find difficult to work with but whom she admired nonetheless for their talent.

Even within the time and financial constraints of live musicals these gifted people found a way to ensure the quality and integrity of their creative endeavors.  Not always so in film and TV.

The job of music arranger is generally under recognized, more so at that time for a woman. Betty often expressed interest in doing a film score but offers never came. In an Athens News interview in 1982 she commented, “Generally women in music are poorly treated by the film community…. (I) could easily write an exposé entitled, ‘Women and the Film Industry’.”

Betty taught at many colleges and universities, though her deepest relationship was with OHIO where each year, joining her old friend Shirley Wimmer, she engaged with an intellectually rigorous dance community.

She was a striking figure, elegant and immaculate in fashionable clothing accessorized by pearls or other jewelry, distinctive white hair in a French twist, sunglasses worn indoors, possessing a wicked sense of humor and an infectious cackling laugh. “She was the epitome of sophistication to me… someone from the glamorous worlds of Broadway and Hollywood” says former student Roger Preston Smith.

The Walberg look was matched by the Walberg mind. Remarkably intelligent, conversant in many subjects, she was a formidable and demanding educator. OHIO graduate Deborah Riley remembers her “so alert with such wonderful posture you always felt you had her full attention.” Betty expected the same attention from her students. “She took our efforts seriously and in turn her critiques were to be taken seriously by us,” said former OHIO student Diane Frank, who was her teaching assistant on several occasions.

Diane also remembers Betty’s extraordinary skills as a pianist playing for class. “Betty believed the music should be played at a lower volume encouraging dancers to listen more carefully. They had to be so alert to the music, not just hearing with their ears, but their whole bodies so that it became a conversation between the dancer and the music.”

Roger Preston Smith recollects a delightful class during which Betty moved the piano around the studio by herself so that the dancers had to engage the sound, and the physical instrument, from different locations.

Betty could be intimidating, yet students often surprised themselves by how well they met her challenges. She favored those gifted with innate talent, but also those making a tremendous effort to learn.

Former OHIO School of Dance Director Madeleine Scott describes Betty as “giving you permission and encouragement to understand things in multiple ways and directions.” She believed that students should revel in exploring ideas and unorthodox approaches, even if at times that proved difficult or uncomfortable. For Betty, the journey was as important as the destination.

Three Short Stories and the Finale

A young choreographer, visiting Betty at her home innocently suggested a game of gin rummy. Elated, he won the first hand. Deflated, he lost the next dozen. Betty was a devastatingly good card player, approaching the game as she did all her endeavors; with seriousness, intelligence, tenacity, keen observation and shrewd evaluation, not to mention setting a sucker up by letting him win the first time.

She was so good that on tour with an enormously popular singer of the day she won several thousand dollars from him playing cards. At tour’s end, he refused to pay. Undaunted, she went to the musicians union and lodged a formal complaint. He paid her.

The noted American choreographer Donald Byrd had Betty as a mentor in his early career in Los Angeles. Believing that teaching would give him added perspective, she recommended him as a guest instructor for a quarter at OHIO. Donald is candid about how he badly neglected his administrative responsibilities, thinking they were “too trivial… for an artist and choreographer on the rise.”

After returning to LA, Betty came to see him at a rehearsal, asking him to lunch. With typical candor and directness, she told him what was wrong with him and his behavior, “I don’t really care about you, I care about your talent. You have a responsibility to it.”

Angry and hurt by her criticism, made more stinging by knowing she was right, Donald cut off the relationship. Fortunately, what came out of this experience for him, as with many young people who worked closely with Betty, was “transformational, and started me on the path to rethinking who I was as an artist and what that responsibility meant.”

A few years later, hearing that Betty was critically ill, he called to apologize for his behavior, offered thanks for her honesty, and acknowledged that her criticism was warranted. She died soon after in 1990 at age 69.

Increasingly incapacitated in the final year of her life, Betty’s many friends and colleagues from theater, film, television and academia donated to a fund that ensured she would remain in her home surrounded by the books, recordings and memorabilia she treasured. Unfortunately, she became too ill to write a hoped-for memoir.

The truth is that she did complete a wonderful book. Each page, and there are many, is the life of a young artist who was touched by her creativity, wisdom, and unbounded generosity.