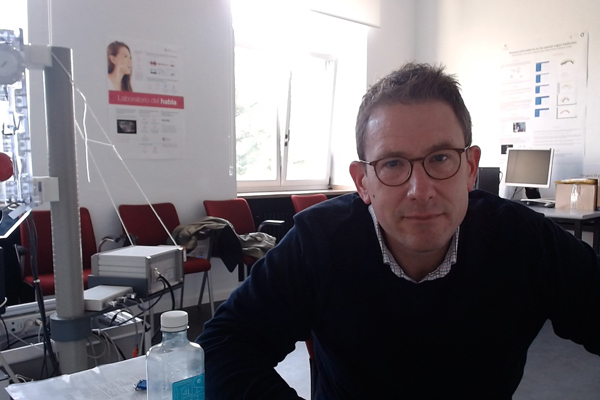 A native of Athens, Gibson earned both a B.A. and an M.A. in Spanish from the College of Arts and Sciences, followed by a Ph.D. in linguistics at the Universidad Complutense de Madrid, with a specialization in phonetics, the classification of speech sounds, and phonology, the system of sounds that forms language.

Gibson’s time as a visiting research scholar this fall is sponsored by the Institute for the Empirical Study of Language in the College of Arts and Sciences, where he serves as an adjunct member.

“Dr. Gibson comes to us from Universidad de Navarra, Pamplona, Spain, where he teaches courses in phonetics and phonology and directs a speech lab,” said Emilia Alonso-Sameño, Ph.D., director of the institute and professor of Spanish in the department of modern languages in the College of Arts and Sciences.

Alonso-Sameño invited Gibson to the introduction to Spanish linguistics class she is teaching this semester and students found their interactions with Gibson informative, engaging and fun.

“I thoroughly enjoyed Dr. Gibson’s approach. We were all engaged in the activities he proposed, and the explanations he provided us with made me feel more confident with the topic,” Lucía Vallaro, a graduate student in the M.A. in Spanish program, said.

Upon completing his Ph.D., Gibson did post-doc projects in speech production at the Laboratoire de Phonétique et Phonologie at the Université de Paris Nouvelle Sorbonne III under the tutelage of Dr. Cécile Fougeron and at the Universität Potsdam with Dr. Adamantios Gafos.

Gibson’s main objective with his research is to provide empirical support to theoretical issues in phonetics and phonology. He uses an experimental protocol battery to quantify speech movements in time and space and address the relationship between the spatial and temporal parameters of speech gestures, and how these inform the cognitive representation of speech actions. His research is situated within the larger theoretical framework that seeks to uncover how cognitive representations of speech movements are informed by the low-level, spatio-temporal characteristics of the speech act in a dynamic systems framework.

“I’m looking forward to sharing my work with students from many different disciplines and collaborating with a variety of scholars here at OHIO,” Gibson said.

He has formed a research group with Alonso-Sameño in which they are collaborating with scholars from New York University, the Universidad de Navarra, and LMU-München in order to enhance an already-existing meaning-based coding system with acoustic cues to better help therapists diagnose and treat couples facing communication difficulties and relational challenges. Since meaning alone is oftentimes insufficient to covey a variety of emotions, this research focuses on how human beings tend to rely on intonation and other acoustic means to try to fully understand emotions.

Additionally, Gibson is also collaborating with folks from the College of Health Sciences and Professions.

“Dr. Gibson has been collaborating with me here in my Auditory Prostheses Lab, and we have started a project on English and Spanish vowel perception in noise,” Li Xu, Ph.D., professor of audiology in the communication sciences and disorders program, said.

Their project seeks to uncover how adult listeners perceive vowels in varying levels of noise. They plan to subsequently extend this line to the perception of vowels in noise by children with normal hearing and their peers with cochlear implants.

Gibson is currently an associate professor of linguistics at the Universidad de Navarra in Pamplona.

Tags:
College of Arts and Sciences
College of Health Sciences and Professions