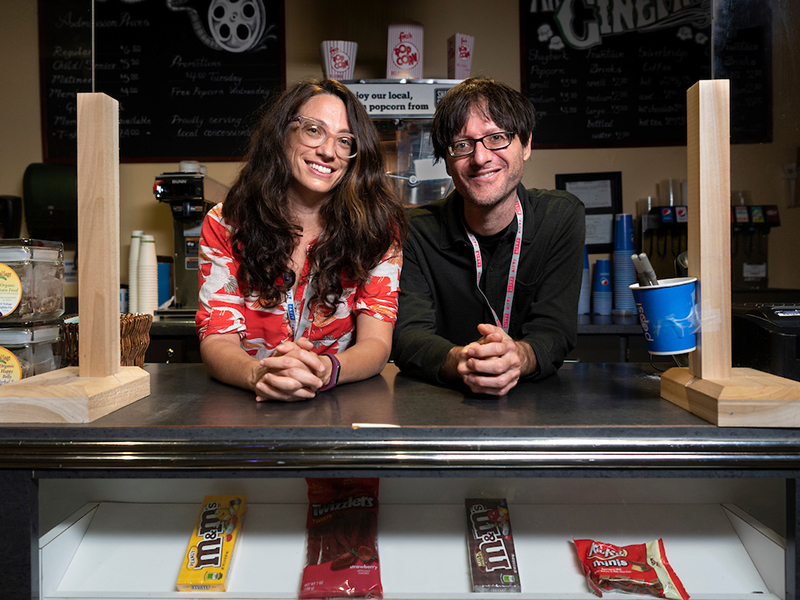 The 47th and 48th Athens International Film + Video Festival (AIFVF) concluded on Sunday, Oct. 24, 2021, and screened more than 500 films made by filmmakers across the globe.

For two filmmakers who presented in special events at the 2021 AIFVF last week, experimental filmmaking comes broadly from a place of exploring and showing viewers the world through the “artistic possibilities of media making,” yet each filmmaker has a distinct practice, process and personality when it comes to creating work.

Bill Brown, an associate professor of media production at the University of North Carolina in Chapel Hill, thinks of himself less as an experimental filmmaker and more as a “nonfiction filmmaker.”

“I like to take my camera out into the world and that’s where I find my inspiration,” Brown said. “The films themselves are very personal. They’re really subjective.”

Brown highlighted his “XCTRY” project as an example, a travel log that repurposes footage of a cross-country trip shot years ago, he explained.

Brown’s films have screened at the Sundance Film Festival, the Lincoln Center and other prestigious venues.

“I played around with photography as a really young kid, I had like a darkroom in my closet … it was an unventilated closet so breathing photo chemistry at a young age may have sent me on my life course to be interested in film,” Brown added with a laugh.

Additionally, Brown is the co-founder of the Cosmic Rays Film Festival (postponed in 2020 due to the pandemic) along with Sabine Gruffat, an associate professor of art at the University of North Carolina in Chapel Hill and experimental filmmaker.

“We were totally inspired by festivals like Athens which are fiercely committed to filmmaking as an artistic pursuit,” Brown said. “Not so interested in the Hollywood, industrial, commercial aspects, but the artistic possibilities of media making.”

Gruffat has produced digital media works for galleries across the nation. Her films have appeared in festivals around the globe, including The Copenhagen International Documentary Film Festival and the Image Forum Festival in Japan.

Gruffat, a French American artist born in Thailand, owing to a childhood living in Saudi Arabia and Hong Kong, said her art is shaped by her travels.

“I’ve always felt comfortable not rooted in place, and not necessarily aware of the local culture and always trying to fit in,” she said. “As a result, I never feel completely comfortable in either the filmmaking community or the arts community. I like having one foot in each and being a little bit of an outsider in each.”

Gruffat said she defines experimental film as “a consideration of the materials and form of the film itself in the process of making that is, in some ways, related to the content of the film.”

Her current projects focus on making art that can exist in multiple spaces.

“I definitely think of my studio as my computer desktop. So, anything that comes off of it is output…I have these conversations with curators and they’re like, ‘So, is this a photograph?’ and I’m like, ‘It could be!’” she said.

Both Brown and Gruffat show their work in a variety of formats including installations, photography and digital art. Their film “Amarillo Ramp” explores sculptor Robert Smithson’s final earthwork, located in northwest Texas.

About 30 filmmakers screening work at the festival came to AIFVF to engage with OHIO students from the School of Film and other disciplines as well as the public, says David Colagiovanni, director of AIFVF.

“The 47th and 48th AIFVF marked the first time it’s screened 500 films, marking the largest number of films the festival has ever screened,” Colagiovanni said. “It was great to once again see the interaction and dialogue among visiting filmmakers, OHIO students and the community spill out in front of the Athena Cinema over 10 days of film screenings. We are so grateful to the AIFVF student programmers and volunteers, our distinguished jurors and projectionists, our community sponsors, and the amazing Athena Cinema staff for making it all happen.”

Winners for films in competition for the 47th and 48th Athens International Film + Video Festival are below.

From the Booth Prize (given by Dan and Dan of the projection team): “Eat the Rainbow” — Director: Brian Benson, Narrative, USA, 20 min.

Film House Award: “Those That Tremble as if They Were Mad” — Director: Salma Shamel, Experimental, Egypt, USA, 11 min.