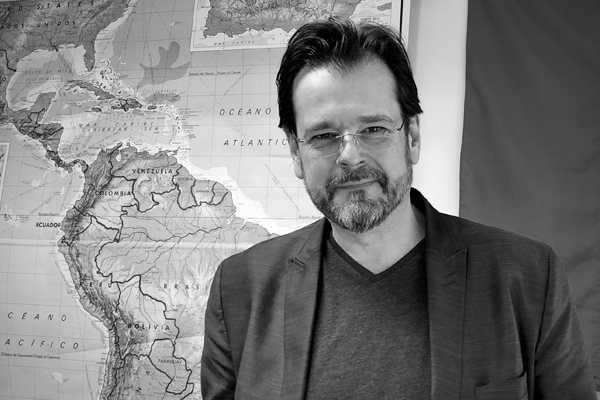 From Mexico City to Paris and beyond, 1968 saw massive protests, political violence, the assertion of new values, and explosions of artistic expression that together challenged dominant structures, ideologies, and sensibilities amid the Cold War.

Even Ohio University would find itself closing amid riots in May of 1970.

But radical change in Chile, the southernmost country in the world, took a much less violent pathway, writes Dr. Patrick Barr-Melej in his newly published essay, “A ’68 Chileno? Politics, Culture, and the Zeitgeist of ’68.” Barr-Melej, professor of history and interim executive director of the Center for International Studies, explores the zeitgeist — or spirit — of 1968 in Chile as part of an edited volume of essays.

The political, social, and cultural history of Chile during Latin America’s “long 1960s” was bookended by the Cuban Revolution in 1959 and the military coup that ended Marxist president Salvador Allende’s “Chilean road to socialism” in 1973.

This historical context provides Barr-Melej with an insightful point of access into the zeitgeist of 1968 in Chile. He maintains that many of the essential factors that contributed to 1968’s transnationalism played out differently in Chile, where they were of lesser magnitude or simply did not unfold.

To illustrate, Barr-Melej looks at a university reform movement in 1967–68 that realized its immediate goals under a centrist Chilean government — circumstances that were quite alien to student protesters in Mexico City or Paris. And although 1968 saw bouts of unrest and conflict in the streets of Santiago, Chile, often with radical youths pitted against police, such eruptions were small and brief, did not significantly impede the rhythms of life in the capital or elsewhere, and largely were outcroppings of ongoing debates and legislative struggles between political parties and blocs, he argues.

Barr-Melej notes in his essay that a vital factor shaping Chile’s 1968 experience was the absence of a profound and perilous sense of impasse, which was a complex, contributing factor leading to 1968’s explosiveness in Paris, Mexico City, and other contexts. This was the case in Chile notwithstanding deep frustration voiced by workers, various student and youth groups, and other constituencies, especially on the more radical (and radicalizing) left, regarding systemic elements of the country’s political culture and socioeconomic architecture.

“With democratic and pluralistic qualities framing an electoral environment in which leftist political parties had participated earnestly for many decades, Chile’s pre-1973 political culture afforded space, though highly contested space, for the rise and development of radical politics, including that of young people,” Barr-Melej explained.

“Since the 1930s, political democratization was interrupted in just a few instances, like the banning of the Communist Party from the late 1940s to the late 1950s. Broadly speaking, Chile’s political culture essentially had provided a mechanism — a pressure valve, let’s say — that channeled postwar revolutionary energies into mainstream politics, and this was true until the early 1970s and the election of Allende. We don’t see this in France or Mexico on the eve of 1968, for example,” he said.