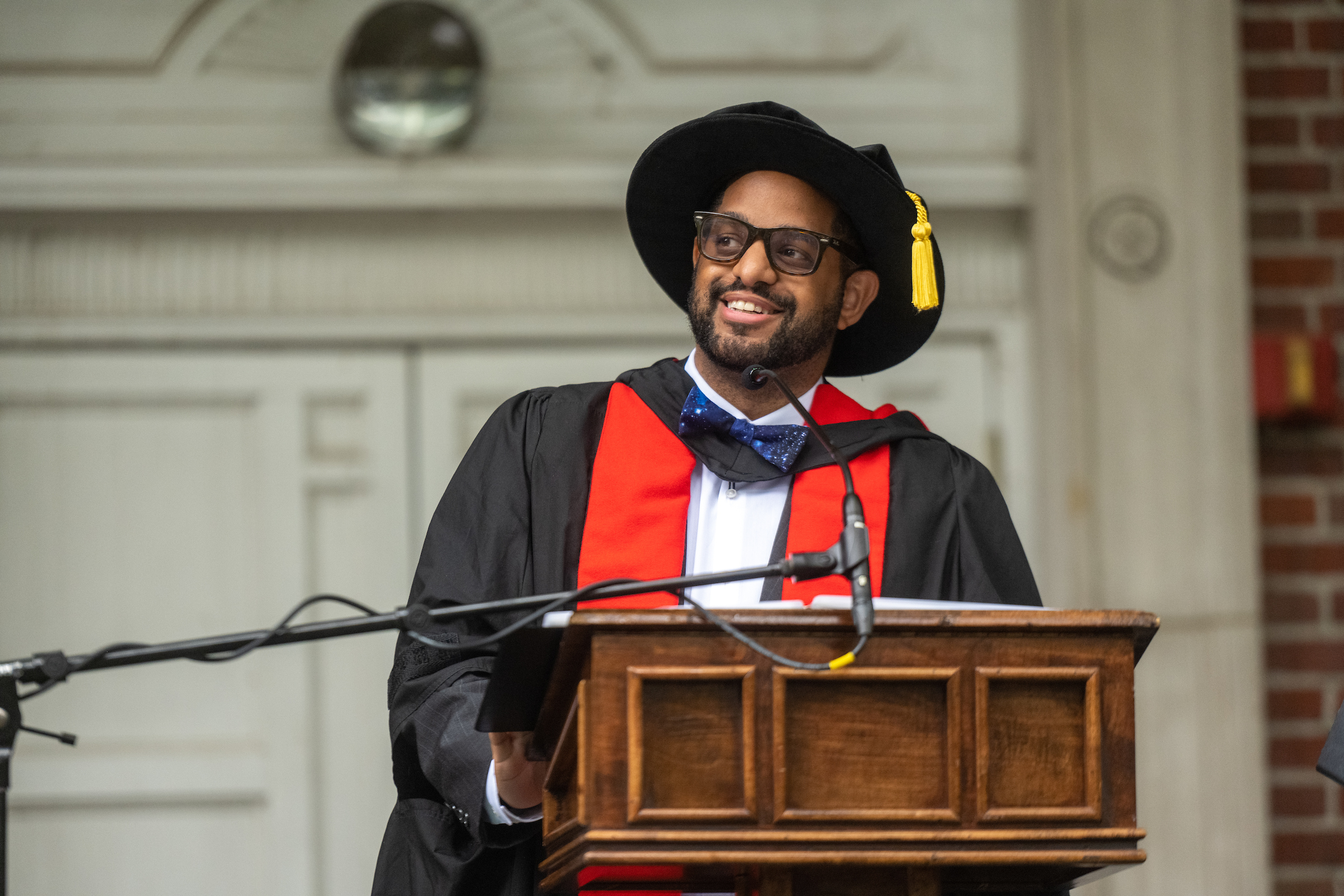 The Class of 2020 finally got an in-person commencement ceremony on Sunday, Sept. 5, 2021. The commencement speaker was alumnus Dr. Keith Hawkins, BS ’13, who encouraged students to follow three lessons: find your passion even if it comes from an unlikely place; seize all opportunities you can; and achieving dreams takes hard work, failure, and also necessitates the support of loved ones and mentors that can make the difference.

“I’m deeply honored by the opportunity to give a commencement address,” Hawkins said. “It was really honoring to be able to come back to my alma mater and be a part of that ceremony. It was very unique and I’m glad that a lot of the students got a chance to come back and finally be able to celebrate their hard work. I’m over the moon that I got to celebrate it with them.”

Hawkins graduated from Ohio University in 2013 from the Honors Tutorial College (HTC), earning his bachelor of science in astrophysics, with minors in mathematics and African studies. He was also a Goldwater Scholar as well as a Templeton Scholar. In 2018, he received the Charles J. Ping and Claire O. Ping Recent Graduate Award.

Hawkins is currently an assistant professor of astronomy at the University of Texas at Austin and is well known for his research in galactic archaeology, which focuses on exploring the formation and evolution of the Milky Way galaxy.

His journey to OHIO started before he was even a junior in high school. In high school, he entered several projects in science fairs around the world. At one fair, his project was judged by Markus Boettcher, a former professor of physics and astronomy at OHIO. Hawkins asked him if he could research that summer at OHIO to learn more about astronomy, but no program existed for sophomores – so Boettcher opened his home to Hawkins to let him explore astronomy for two months.

After his graduation from OHIO, he attended Cambridge University as a British Marshall Scholar, and earned his doctorate in astronomy in just under three short years. He was hired onto the faculty at UT Austin a few months after completing his degree, and was one of the youngest professors of astronomy in the world.

Hawkins credits many OHIO faculty and staff members as being mentors to him. “It really does take a village,” he said, in terms of support.

When he first was looking at Cambridge University, some people told him they were doubtful of future success due to the shorter timeframe of the doctorate program. However, the advice of his professor, current OHIO Vice President for Research and Creative Activity Joseph Shields, gave him the confidence he was making the right choice.

“Joe Shields told me once I graduated, that there are many paths to success and that it was okay that I wasn’t going down the traditional path of a five-to-six-year Ph.D. program in the United States,” Hawkins recalled. “His advice, in terms of many paths of success, really helped me visualize that there was more than one path.”

He also is thankful for the mentorship of Distinguished Professor Dr. David Drabold in the Physics and Astronomy Department, who was Hawkins’ director of studies while in HTC, and helped tutor him in physics. He also gives thanks to Cary Frith, then the assistant dean of HTC and now chief of staff to the executive vice president and provost, who coached him on how to win nationally competitive awards.

Hawkins also comes from a large family, but highlighted his mom, dad, and his twin brother for pushing him ahead in his career.

“I got my work ethic from my dad and my logic from my mom, and I feel so very lucky that I had them as parents,” Hawkins said. “My twin brother also helped propel me further a lot and kind of pushed me to be better, not only as a scientist but as a person.”

While in town for the Class of 2020 commencement ceremony, Hawkins greatly enjoyed reconnecting with his mentors, as well as getting to see the beauty of Athens again and meeting several HTC and College of Arts and Sciences astrophysics majors.

“It was really great to have that opportunity,” he said.

As a student, Hawkins routinely cycled the Hockhocking Adena Bikeway from Athens to Nelsonville, where he would get a bite to eat then head back. It is one of his favorite OHIO memories. Hawkins encourages all OHIO students to get out into the community of Athens, not just the city, but the county to really explore its beauty. He also said “there really is something for everyone” when it comes to extracurriculars.

“I was in STARS, Students Teaching Against Racism in Society, and that group became a really good group of friends,” he said. “I made a lot of life-long friends. I had access to hiking and biking trails in Athens, which was incredible. Beyond the classroom, those were some of my best experiences – being out in nature with friends and being able to explore Athens as a whole, the culture and the beauty.”

Some of Hawkins’ current work at UT Austin is tied back to the research he started while an undergraduate at OHIO. His senior thesis took a look at hyper velocity stars, which are fast-moving stars that can move from five to six million miles per hour, trying to find new ones. His current grant looks at that same problem, but using chemical tagging, which uses the chemical inventory of stars to tag where they were created, which he studied as a graduate student.

As a twin, it is also fitting that he has studied twins stars, finding in 2019 that they do share identical chemical inventories and a similar overall history.

“[Galactic archaeology is] kind of like DNA mapping for human beings,” Hawkins said. “We’re trying to use the chemistry of the star as its DNA to say, ‘This star came from this place’ and ‘That star came from this place over here.’ If we can do that for all of the stars in the galaxy, then we can backtrack how stars have migrated and how the galaxy has assembled itself over time.”

For students interested in astronomy or galactic archaeology as an undergraduate at OHIO, Hawkins encourages them to study, including popular science and peer-reviewed articles, and find mentors who can help them along the way.

“Astronomy in general inspires people. We always ask these questions: ‘Where did we come from? Why are we here?’ Questions that have been asked since the dawn of humanity, really,” Hawkins said about the importance of the field. “And those type of questions really inspire people to go into science, even if it’s not astronomy, but science in general.”

For those that missed Hawkins’ speech, it can be viewed in the Class of 2020 Commencement Ceremony recording.