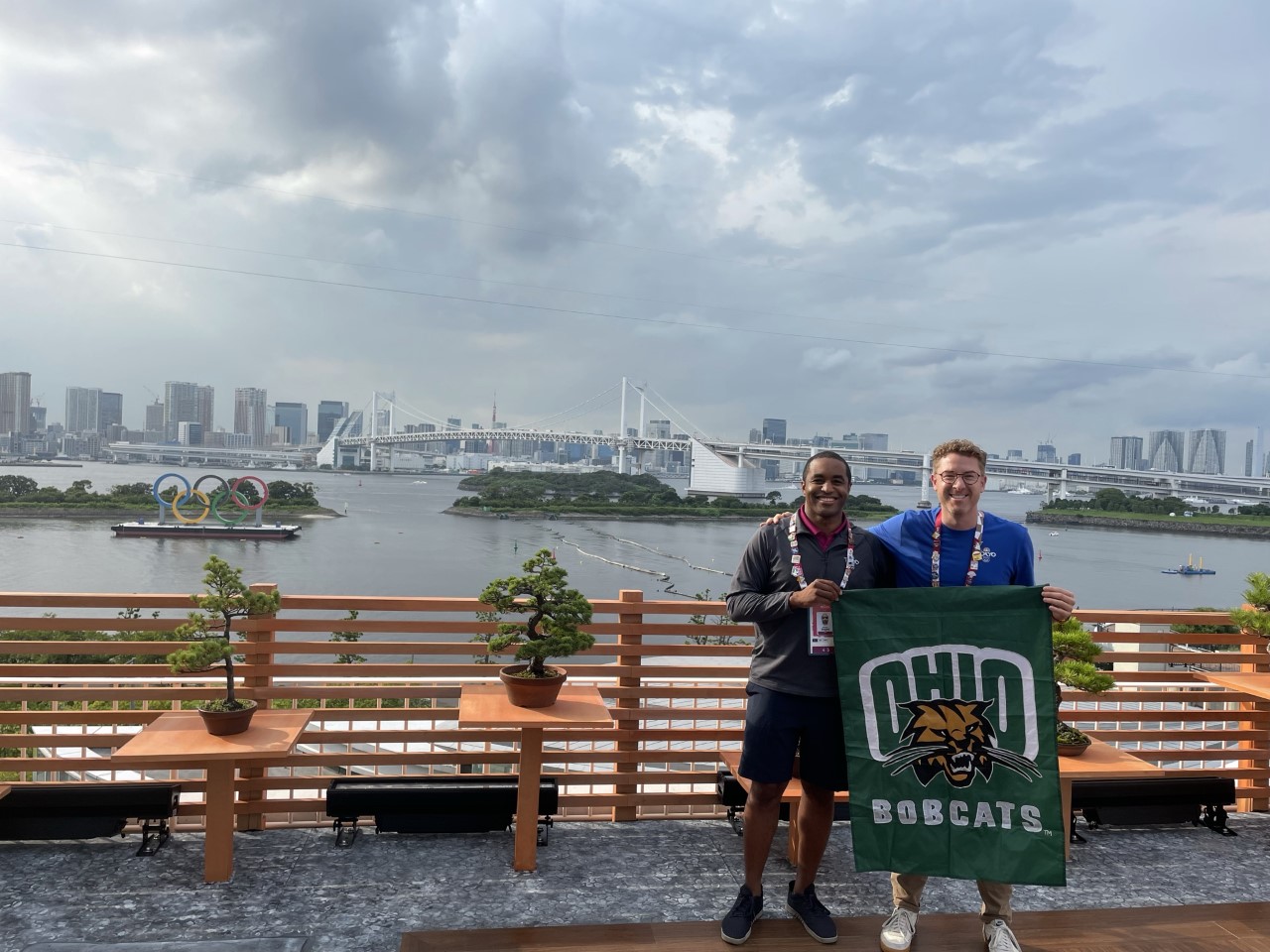 On the other side of the world, Ohio University alumnus and NBC4 Columbus reporter Matt Barnes ran into a fellow Bobcat he had not seen in nearly 15 years, his OHIO tour guide, Michael Burns.

Both men were in Tokyo working on the 2020 Olympics, Barnes for NBC4’s parent company Nexstar Media Group, and Burns for the Today Show. Neither man ever imagined they would reconnect over 6,500 miles away, especially when international travel and the Olympics were limited due to COVID-19.

Barnes and Burns were not the only OHIO alumni to experience this out-of-the-ordinary Olympic Games; three other alumni also worked and participated in this truly once in a lifetime event.

Joining Barnes and Burns in Tokyo were Jay Cohen, a 1999 journalism graduate who was covering water polo for The Associated Press; Preston McClellan, a 2014 Masters of Sports Administration graduate who is the director of player content for the PGA Tour and was a press officer for USA Golf; and Joe Schroeder, a 2019 Masters of Civil Engineering graduate who competed for the USA Men’s Rugby team.

“Having been to the Olympics before, this time around felt really strange because of COVID,” Burns said. “Not because of the protocols we had to take but because there were no fans in the arenas, so these massive stadiums felt almost empty aside from the athletes and media, when normally they are filled to the brim with fans and family members. It was almost eerie and quiet this time, but I’m fortunate to have had this experience and that the Games could happen. Being part of the media team for the Today Show, I think I got to see more things than I normally would since no one was there and it really created a unique perspective.”

“Without Ohio University and the encouragement of my advisors and professors, I would’ve never had the opportunity to work for the Today Show and ultimately go live out a dream of mine by going to the Olympics,” Burns said. “All the classes and organizations I was active in at OHIO prepared me to have the skills and leadership to succeed as an intern and get hired by NBC.”

For Barnes, who graduated with a degree in broadcast journalism in 2008, this was his first time covering the Olympics, something he never thought he’d have the chance to do after switching from sports to news broadcasting.

“I was stunned when I found out I was covering the Olympics,” Barnes said. “I figured when I went from sports to news, my opportunity to cover the Olympics was over. It had always been a bucket list item for me in my broadcasting career. So to be told that back in 2019 was a ‘pinch me’ moment. I knew it would be a lot of work, but also a rewarding experience.”

Barnes credited the hands-on experiences he had at OHIO with setting him up for success in his broadcast journalism career.

“My time at OHIO helped build the foundation for where I am today,” Barnes said. “Working at WOUB was an invaluable resource. The ability to get hands-on training all four years of college in all facets of television broadcasting can’t be measured. Add that to the incredible education from Scripps, and you feel like you’re ready to tackle the world.”

While in Tokyo, Barnes was able to cover a range of stories on all the sports and athletes, but a particular story that stuck with him was that of Worthington, Ohio, runner Maggie Barrie. According to Barnes, Barrie represented the West African country Sierra Leone, and knew she was never going to be a medal contender but for her, competing was never about winning – she was there to represent her parents’ home country and inspire the youth of the small West African nation. She even visited Sierra Leone before the Olympics to deliver nearly 200 pairs of shoes and cleats to young people there who can now start to have their own Olympics dreams.

“Olympians are a special breed, they sacrifice so much in a four-year cycle just to get a chance to qualify,” Barnes said. “They put their body, mind and soul through so much and for these Games, many of them were not doing it under the most ideal conditions, due to COVID. But they push forward, and they persevere, fighting through the adversity. It was inspiring for myself and to have the opportunity to share their stories with an audience is an honor I won't soon forget.”

Among these Olympians who train for years for the chance of a lifetime was Schroeder, who worked towards his master’s degree while fighting for a spot on the USA Men’s Rugby team.

Throughout his time studying for his degree at OHIO, Schroeder was living in Columbus and playing for a men’s rugby club there. Halfway through his degree, he was recruited by the USA Men’s 7s team and moved to San Diego to play and train there full-time. For the four years prior to the Olympics, Schroeder trained with a group of 20-25 guys to make the training squad. He was then selected as one of 13 players to make the Olympic team.

“It's hard to describe all the feelings I felt going into the Olympics, but I was pumped,” Schroeder said. “It is always an amazing feeling when you finally achieve a lofty goal you set for yourself. This is definitely up there as one of my greatest accomplishments in life.”

The U.S. Men’s Rugby team placed sixth, finishing in the highest place they have ever done in an Olympic Games.

“My favorite part was running out onto the pitch before each game knowing you're representing friends, family, country and God on the biggest stage possible,” Schroeder said. “I also enjoyed staying in the Olympic Village. The atmosphere surrounding it with world-class athletes from different countries everywhere was an indescribable feeling.”

Schroeder added that he is grateful to OHIO for playing a role in his successes, from challenging him with coursework that stimulated his mind, to the helpful professors who were flexible with his schedule as he trained.

“I am thankful for my time at OHIO because it allowed me to not have to put my engineering career on hold,” Schroeder said. “I was able to advance my knowledge and practice in civil engineering while still training full time in rugby.”

Although many things about these Games were different, including not being able to experience the host city as much, those visiting Tokyo were still treated to the Japanese culture through the numerous Japanese workers who welcomed them.

“The Japanese volunteers were so nice and helpful, and although we didn’t get to see much of the city, what we did get to see was really cool,” Cohen, who covered water polo for the AP, said. “The volunteers made Origami each day, and I would pick one and put it next to my computer while I worked. My first impression was that it is an amazing country that I would someday like to see more of.”

This was Cohen’s third Olympics and second time covering water polo after his boss learned prior to the 2016 Rio Olympics that Cohen played club water polo during his time at Ohio University.

“It’s a niche sport so I try to cover more personal interest stories that appeal to a wider audience,” Cohen said.

Some of Cohen’s personal favorite stories he got to tell include Team USA’s Johnny Hooper, whose mom is from Japan, so his trip to Tokyo was sort of like a homecoming for him; a story about a female water polo player who had a horrible accident and built herself back up; as well as the style in which Japan’s water polo team plays since it is so different from other teams’ styles.

“Although it was definitely a different experience, the feeling was the same and the athletes still rise to the occasion,” Cohen added. “Water polo was high level despite the teams having less international preparation and having their training schedules disrupted by the pandemic.”

For McClellan, who managed USA Golf’s social media, website, and media outreach, getting to experience the host city was also a major part of the experience since this was his first time traveling abroad to work the Games. However, what made his job at the Olympics so special was a moment he got to share with one of his athletes. 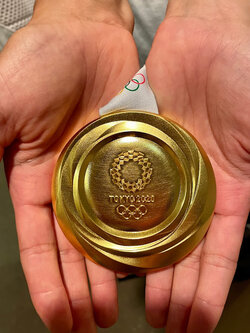 “When Xander Schauffele won the gold medal in men’s golf after scrambling to make an epic par, it was one of the coolest experiences getting to share that moment with him,” McClellan explained. “I was the first person, outside of the media, who got to interact with him after he achieved his dream and to experience that with him is something I’ll never forget.”

McClellan credits OHIO for providing him with such an incredible program and real-world experience that allowed him to also achieve one of his dreams and prepare him to work in the sports industry.

“OHIO was the single best professional and personal decision I ever made,” McClellan added. “I think OHIO in general is a special place, you share a unique bond with people who went to OHIO even though you’ve never met them. I got an interview for my current job because I went to OHIO and there were Bobcat connections in the organization. The comradery you experience as a Bobcat lasts for life and is such a rare thing.”

All of the alumni who traveled to Tokyo took significant precautions and protocols to maintain their health and safety, including taking several COVID tests prior to traveling, as well as once they entered the country, a two-week self-quarantine, and ensuring that everyone was masked at all times.

“Due to COVID, it was harder to experience the culture of the city since we were mainly confined to the Olympic venues and our hotels, but the Japanese staff members we worked with were truly amazing and so nice, creating experiences for us we otherwise may not have got,” McClellan said.

Aside from being Bobcats, these five alumni now all share an experience that very few were given and memories to last a lifetime.

“One of the best things about the trip was the ability to connect with so many Bobcats,” Barnes, the NBC4 reporter, added. “I met Jay Cohen at a Scripps seminar on campus five years ago and then randomly saw him at a water polo press conference in Tokyo. Michael Burns was my tour guide when I visited OHIO as a high school senior. And I saw him every day as he was working with the Today Show. And then I connected with two more OHIO grads who live in Tokyo, and they helped me with numerous stories before and during the Olympics. They also gave me a tour of the Shibuya area. It was just proof that once a Bobcat, always a Bobcat.”