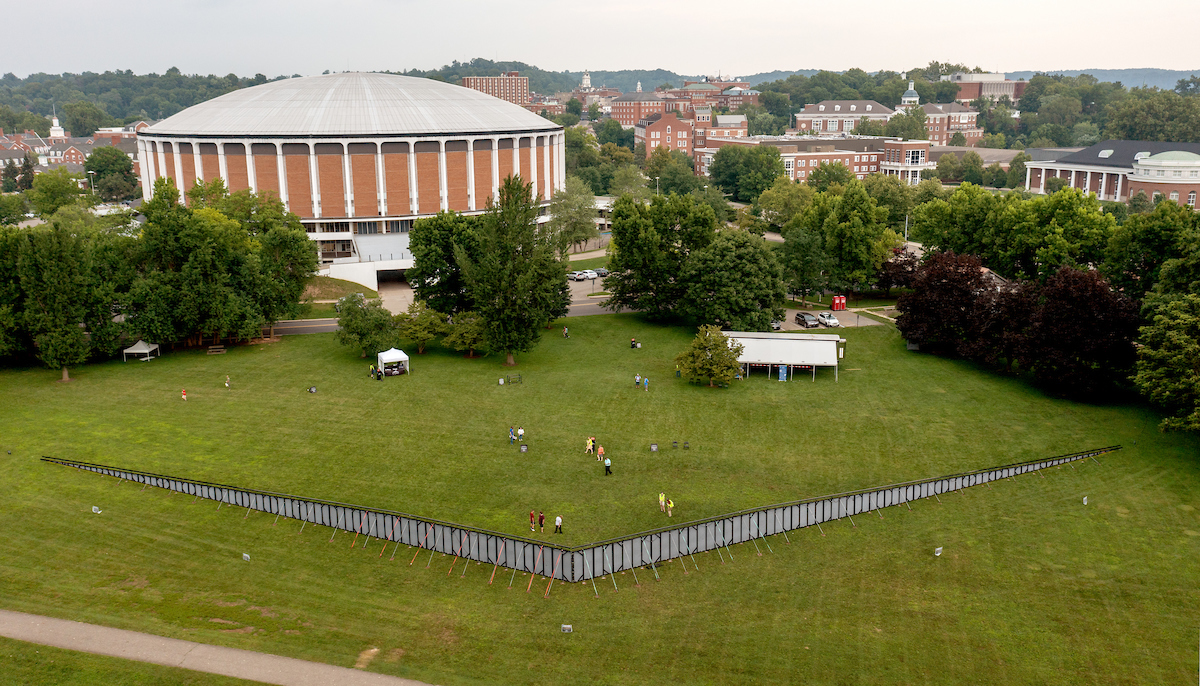 The Wall That Heals returned to Athens from July 28 until Aug. 1 and was set up in Tailgreat Park for anyone to visit. According to event coordinators, an estimated 5,000 community members were able to share the experience.

Despite heat, humidity and the threat of rain, there was a steady parade of visitors throughout the memorial’s visit. Tailgreat Park is located in a large field between the Convocation Center and the Hocking River. The Wall is a traveling three-quarter-sized replica of the Vietnam Veterans Memorial in Washington, D.C. and is part of the Vietnam Veterans Memorial Fund (VVMF). The Wall travels the country with a mobile education center. The mobile education center is a large trailer full of displays.  Site manager and VVMF member Vic Muschler said the education center provides visitors with details of the era and some items that were left at the wall in Washington, D.C.

The Wall was open 24 hours a day for anyone to come and visit. It is run completely by volunteers. Muschler said it is a major community commitment. He added that anyone can volunteer for the Wall.

“It will be one of the most honorable and memorable experiences of your life to come out and volunteer,” he said.

VVMF member Dean Murphy said they could not have the Wall if it was not for the volunteers. He said it takes 40 to 50 volunteers to set up, take down and staff the Wall.

The original Vietnam Veterans Memorial opened in 1982 and was designed by Athens native Maya Lin. Muschler said the VVMF decided it needed to do some outreach by building a scale replica. The VVMF website states that the replica was unveiled in 1996 and has been displayed at close to 700 communities nationwide.

“It’s important to every one of us that we continue to bring that education to those that can’t make it to D.C.,” Muschler said.

Lt. Col. (Ret.) Terry St. Peter, director of the OHIO Veterans and Military Student Services Center, said his office was fortunate to work with the Athens County Convention and Visitors Bureau to help bring the Wall back to Athens. He said the magnitude of the losses represented by the Wall must be seen in person.

“You cannot express in words what it means to have 58,000-plus Americans that sacrificed their lives for our country,” St. Peter said.

Visitors came for a variety of reasons; to pay respects to friends and relatives, to pass on knowledge to a younger generation, or just to take in the history. Vietnam veteran Dale Perry and his wife, Sharon Perry, have seen the original wall in but wanted to bring their grandchildren so they could see it. Their 11-year-old grandson, Collin McKinney, thinks the Wall is cool and has never seen anything like it.

“I think it’s important because it names everyone that died that fought for us in Vietnam,” McKinney said.

Gary Wilcox was invited to visit the Wall by his neighbor, Karen Lax. He said the Wall was impressive, respectful and informative. He thinks the more people know about the Vietnam War, the less chance another war like it would happen again.

“If you forget history, you’re doomed to repeat it,” Wilcox said.

Lax, who volunteered at the Wall, said there are many people who do not understand about the Vietnam War.

“I think it’s important that we all understand why we’re able to do what we do today because of that,” she said.

Volunteer Linda Chiki chose to volunteer because her cousin was killed in Vietnam, and her brother-in-law was severely injured. She thinks the Wall is important so veterans and their families can see the names.

“It is a healing process for people,” she said.

Volunteer Lou Horvath went into the Army on Valentine’s Day 1967 and got out just before Christmas 1970. He was in Vietnam from August 1968 until March 1970. He said he made some lifelong friends during his time in the Army.

Horvath was the first Vietnam veteran to serve on the Veteran Service Commission in Athens County, along with attorney David Frey. He thinks it is important to represent and meet people to show respect to those who never made it back from Vietnam.

“You have to give credit to the people who have put this together,” Horvath said.

Volunteer Scott Moody said some of his high school classmates are on the Wall. He volunteered because he thinks it is important to recognize those who served in the war.

Athens County Veterans Service Officer Kim Spencer was on site because it is part of her office’s job to make sure veterans know they can help them. Her job consists of filing claims for veterans so they can receive compensation.

The VVMF is a non-profit organization who is dedicated to those who served in the Vietnam War. Muschler said being a part of VVMF is the most honorable privilege a person could have.