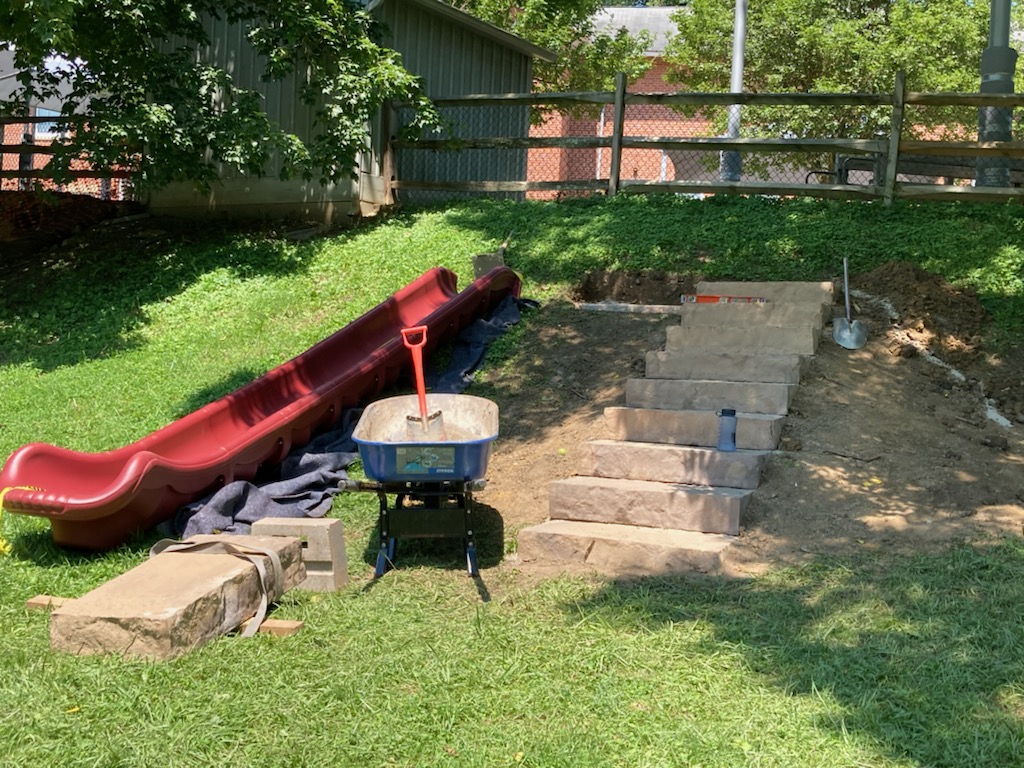 When John DiVincenzo, BGS ’88, sought to honor the memory of his late wife, Lisa Donovan, BSHEC ’89, MSHCS ’93, he knew exactly how to do it: through a gift to Ohio University’s Child Development Center (CDC), where Donovan worked while earning her master’s degree. However, he could not have guessed how his generosity would inspire so many others involved in the project to go the extra mile to honor Donovan and the values she held most dear.

DiVincenzo and Donovan met in Athens, and decades later, those memories remained an important part of their lives. He recalled how many of her favorite experiences were from the CDC: the energy of the children, keeping the small trinkets they would make or find for her, watching them learn and grow and laugh. Years later, she would sometimes pick up the trinkets from those days and laugh, still remembering the name of the child who gave it to her.

“I wanted to do something for the CDC, which was such a huge part of her life,” DiVincenzo said. “She still has little bits of her time there all around the house.”

These memories inspired DiVincenzo’s gift to build a new natural playground at the CDC, which serves as the early childhood laboratory within OHIO's Gladys W. and David H. Patton College of Education, creating a space for limitless imagination and creativity for the children.

“We were hoping to find a donor to install pieces and parts of the playground, but we never dreamed we would find a donor to fund so much of it,” said Lisa Frasure, director of the CDC. “Lisa was a teacher here for about 10 years, so it seemed like a perfect fit.”

From the beginning, DiVincenzo knew exactly who he wanted to install the playground: Mason Chambers, AB ’87, long-time friend of DiVincenzo and Donovan and then-owner of Athens’ Five Spring Farms along with his wife, Lisa Chambers, AB ’92.

“You could just see Mason’s mind, what he was thinking and how he was putting it all together,” DiVincenzo remembered. “You could see it in his eyes that he loved this project, he had it all laid out in his head. He was very determined, earnest to do this for Lisa. I was really glad he was able to do the project.”

Mason Chambers got to work right away, with lots of ideas and determination that pulled the project through the pandemic.

“There was a really deep personal meaning,” Lisa Chambers said. “They were friends since 1988. He knew her very well. Seeing how she interacted with all the children in her life, Mason was very intuitive and good at reading people. It was probably his favorite project he ever did. Mason knew Lisa enough to know exactly what she would want, and how to make it last for years.”

He sourced unique materials from area companies and organizations, including century-old trees from The Ridges that a local sawmill had been saving for a special occasion. Sandstone foundation stones from the Gallia County Jail were used to create a Wickiup, a domed structure characteristic of indigenous North Americans.

Then, in April 2021, Mason Chambers passed away unexpectedly. Much of the playground had been set in place and plans for the future were already laid out, but the work paused. It was then that DiVincenzo had a chance to visit the CDC and see what had been done for the first time.

“The size of it was the first thing that struck me. Lots of room for the kids to move around, more than they used to have,” he said. “I like the idea that the kids have lots of places to go and explore and pretend, so they’re not confined to the jungle gym. Newer playgrounds are small and have lots of plastic to play on, but that’s not Lisa. She would have loved it. I can just see Lisa rolling down the hill with the kids. And frankly, so would Mason.”

Even so soon after construction, it is easy to see the impact of the playground. Here, Donovan helped teach kids the value of imagination and creativity, and now, 30 years later, those at the CDC remember her valuable lessons and teach them to today’s children as they climb through hollowed-out logs and roll down the grassy hill and laugh on the stone amphitheater. Even now, the playground is already defining a legacy that will persist for generations.

Although DiVincenzo says he regrets not initiating this project during Donovan’s lifetime, he knows that with the help of so many who loved her and were inspired by her story, the playground will now stand as an enduring testament to her life and legacy for years to come.

Contributions to the Lisa Donovan Memorial Child Development Center Playground Fund are welcomed and can be made online.