Brian Collins dives into ancient Sanskrit poem and comes up with - a modern plotline? 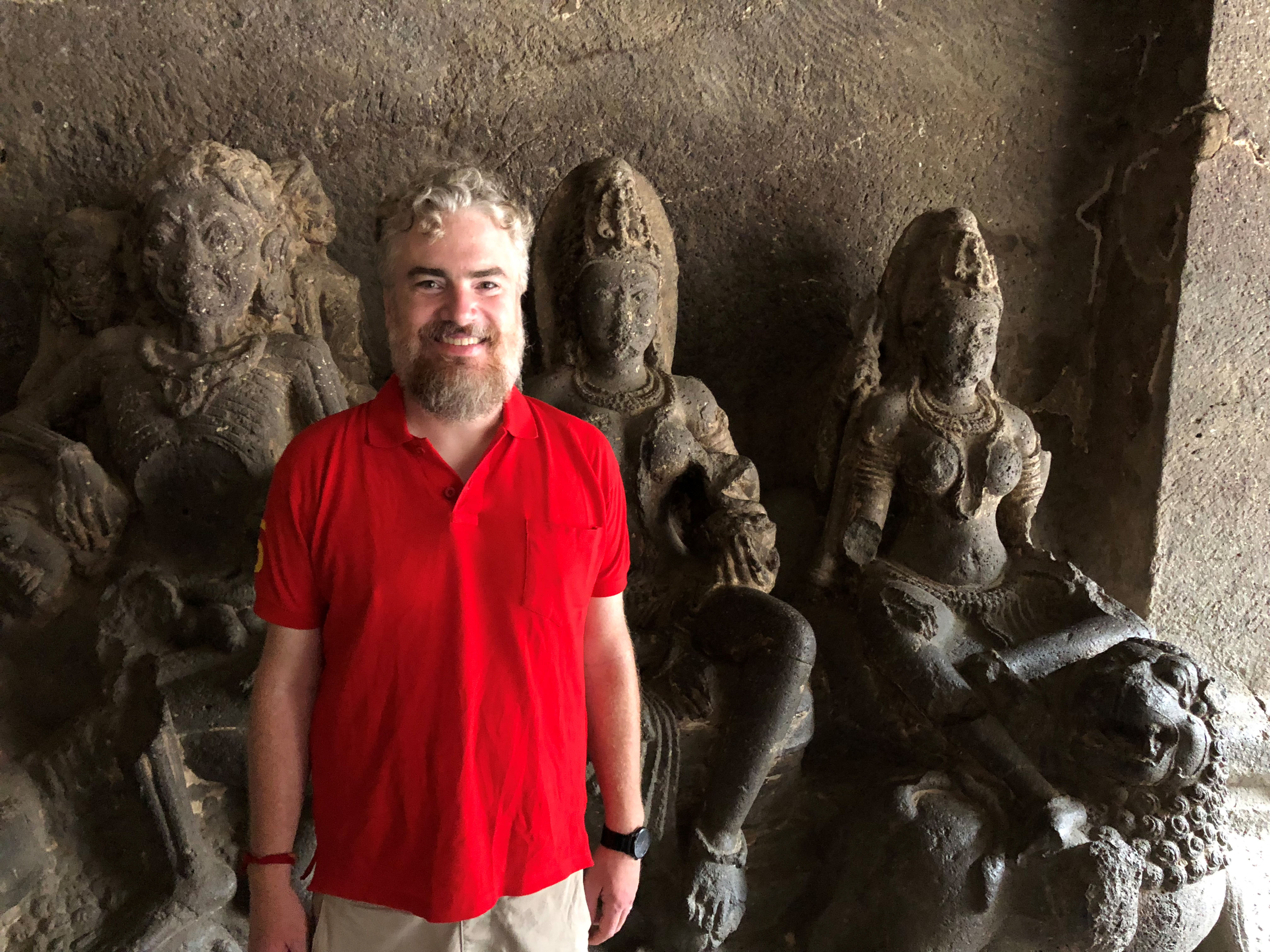 How does a non-traditional college student end up a preeminent scholar decoding an ancient Indian myth about a Hindu god with a resemblance to Oedipus? And why was he drawn to a dark character who could have been the model for Star Wars' Kylo Ren?

Dr. Brian Collins sampled a variety of undergraduate pathways until something caught his attention and became his passion.

"I was typical of many of the students who find themselves drawn to the humanities," Collins said. "I tried majoring in film, then took a few years off before coming back as a psychology major."

Collins had questions about life and philosophy, and he said his first foray into what would become his life work started almost as a cliché, looking for answers in another religion.

"Originally I took a Hinduism class because I was reading Kierkegaard and Carl Jung, and I wanted to see what an Eastern religion was about, as many of us do. I quickly got all that shaken out of me — the Eastern religion idea. But it was in fact the only reason why I ever took a class on Hinduism, and the only reason I ever ended up at the Mahābhārata."

And like many of the College of Arts & Sciences students he advises today, Collins added a second major.

Actually, it took a few years — and divinity school at the University of Chicago — for Collins to go where almost no one had gone before, delving into the well-known but rarely studied mythical god and hero Paraśurāma. This Brahmin warrior appears in Mahābhārata, an epic Sanskrit poem from ancient India.

"Paraśurāma is best known for beheading his own mother and annihilating 21 generations of the Kṣatriya warrior caste in a massive genocide — kind of like Kylo Ren murdering his father and trying to kill the last of the Jedis," Collins said. "Or Psycho's Norman Bates."

While some gods in this epic tale, like Rāma and Kṛṣṇa, are well-known, Paraśurāma "has attracted far less scholarly attention, with few temples devoted to him and scant worshippers," he said.

These days, Collins chairs Classics & Religious Studies in the College of Arts & Sciences at Ohio University and holds the Drs. Ram and Sushila Gawande Chair in Indian Religion and Philosophy.

From his desk in Ellis Hall — in Classics & Religious Studies, sharing a building with English and Philosophy — it's easy to see how some of the same questions about humanity recur across time, told and retold in different languages and different religions. His colleagues in History also can find recurring themes of heroes and villains, wars and peace. And Collins drew on his interest in psychology to examine the trauma and complex relationships in Paraśurāma's story. 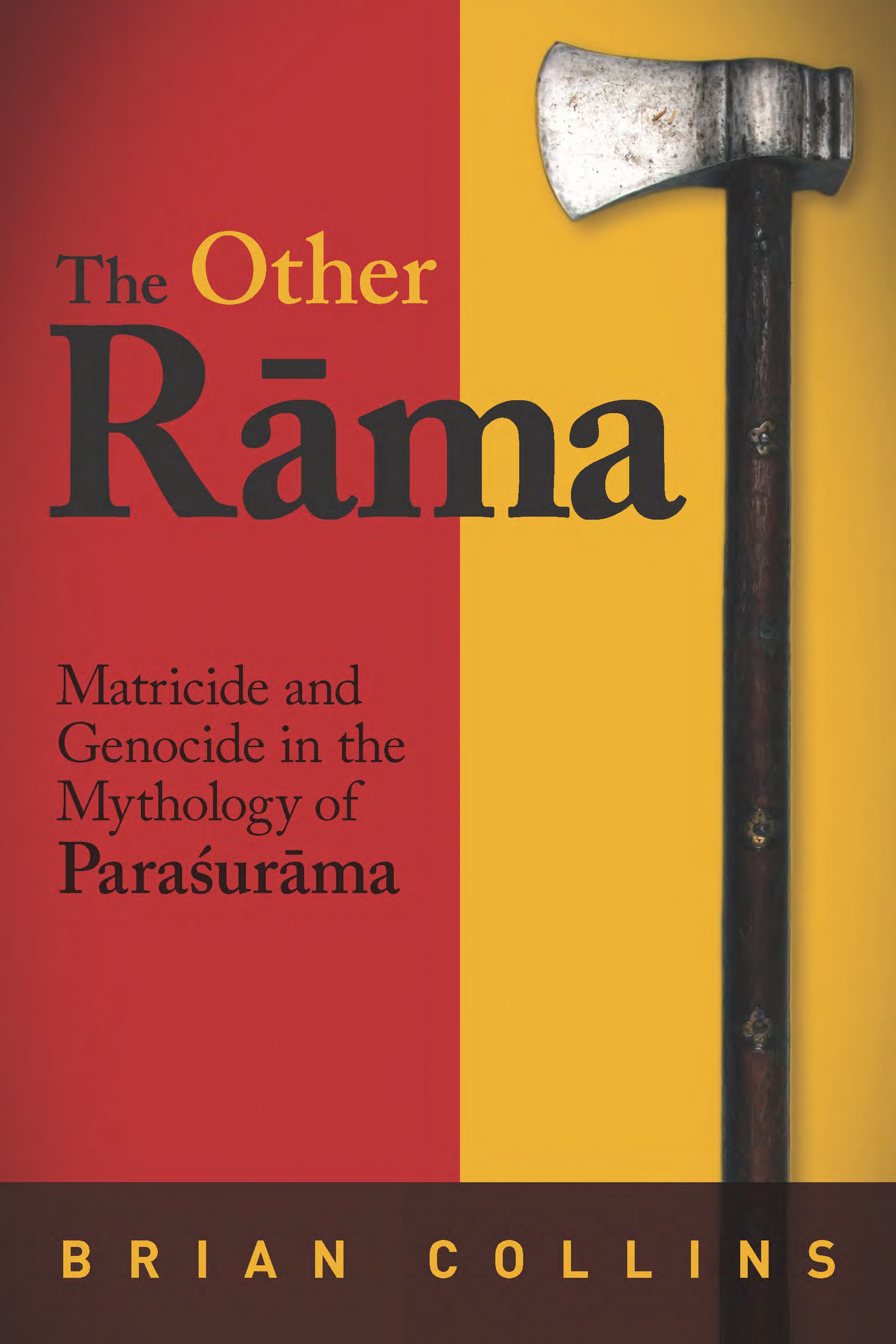 Collins was invited to be interviewed on the New Books Network’s Life Wisdom Podcast hosted by Raj Balkaran, where he talked about how he arrived at the Mahābhārata and the ways in which a mythological figure conceived almost 2,000 years ago still holds relevance when trying to understand the human condition.

"I wanted to look at this story and see what it told us about the people who made it, the people who heard it, and then, by extension, ourselves," Collins said.

It was a multi-year journey for Collins, decoding the language, the religious and historical context, and the symbols embedded within the storyline.

"One thing that you can learn about from the myth is the way that symbols work. Symbols have power, and they have power because they communicate some meaning, which could be political, psychological, or cultural,” Collins said. “A cultural meaning is a way of understanding how a group is constituted and who's in it and who's out of it. But if it's just a cultural message, then it's propaganda. It's just somebody getting up on a soapbox and telling you how to live.

Paraśurāma's story is full of twists of fate and doomed decisions, all set within a war between bloodlines — his mother's error in seeking a gift from her ancestor, his father's jealousy that led to him order his son to behead his mother, and the child's wish to undo it all.

"I think that has to do with the family unit and different ways in which our childhoods shape our outlook," Collins said. "This is a story of a trauma that is repressed. I mean you cannot chop your mother's head off, put it back on and go about your daily business and pretend like nothing ever happened, which is exactly what he does. But then when you go further into the later versions of the myth from the last 500 years or so, you see that everybody knew that."

Collins’ Life Wisdom episode, which aired on June 16, focuses on Collins’ work on the Hindu god and mythic hero Paraśurāma (“Rāma with the Axe”) and the lessons his story has for the world today. Paraśurāma is the sixth incarnation of the Hindu high god Viṣṇu. He is also the subject of Collins’s recently published second monograph, The Other Rāma: Matricide and Genocide in the Mythology of Paraśurāma, in the SUNY Series in Hindu Studies.