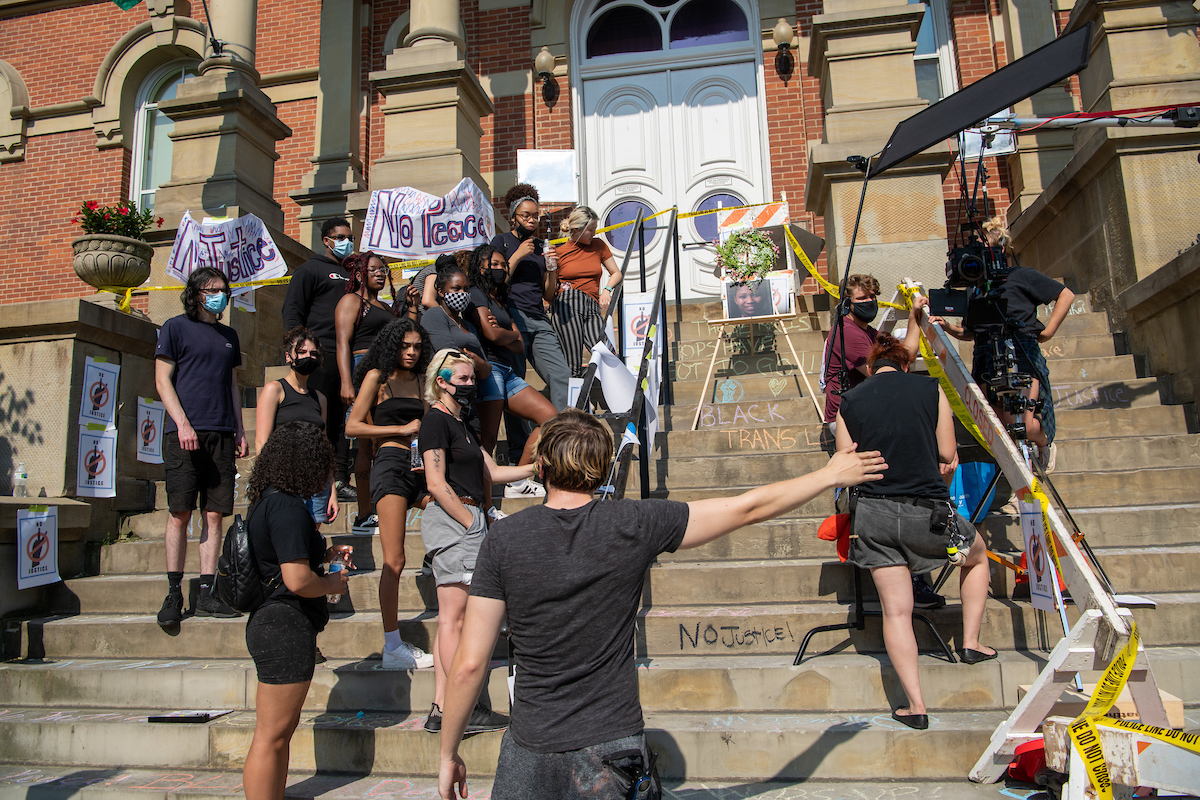 Ben Siegel/Ohio University Actors and producers set the scene for a virtual reality recording on the steps of the Athens County Courthouse.

Over the past few weeks, students from across campus gathered at production locations, including the Athens County Courthouse on May 26, to shoot scenes for a virtual reality project to help train law enforcement.

The project, the Appalachian Law Enforcement Initiative, involves communities by bringing together law enforcement officers, public administrators and community stakeholders. Using virtual reality, the project will help teach de-escalation techniques and reduce the use of force to help improve law enforcement outcomes for both the police and community.

Associate Professor John Bowditch, director of the Game Research and Immersive Design (GRID) Lab and one of the project’s producers, said there are several entities on OHIO’s campus involved with the project. The Voinovich School of Leadership and Public Affairs is providing the funding, and many of the students working on the project are from the Scripps College of Communication. There are also students from film, theater and other departments in the College of Fine Arts. They are working with three law enforcement agencies: Athens Police Department, Ohio University Police Department and Athens County Sheriff’s Department.

Professor Eric R. Williams said the GRID Lab tries to hire students at a level above the things they already know. A student learning about lighting may get to be in charge of the lighting. Someone above their knowledge base is there to help them.

“What it really comes down to is pre-planning and hiring well-trained, smart people that are excited about the project,” Williams said.

Bowditch said the goal is to use virtual reality scenarios to help law enforcement officers understand there could be more to stories than what they see. He said it can be hard for them to process variables and come up with how they would act in a real situation. Making mistakes is okay in virtual reality because there are no real penalties.

“The hope is to get all of your mistakes out of the way here in the process of learning the best approaches,” Bowditch said. “When it comes time to actually apply those best approaches, it’s going to feel like second nature to them.”

David Malawista, a member of the Athens Police Department and a psychologist, brings skills from both of his backgrounds to the project. He helps to make sure the scripts reflect the way law enforcement would act. He said the project is different from learning about directing, lighting and sound in a classroom because the students get to actually do those things.

“It’s a whole different experience being out here in the field and actually doing it,” Malawista said.

The scene being shot at the courthouse was about a Black Lives Matter protest and memorial for a fictional person who was killed by police. The scenario involved a confrontation between police and someone who put posters on the barricade. One officer would display a negative reaction and another would provide a positive reaction. Malawista said the goal was to show law enforcement how to relate to minorities such as African Americans and how to react in positive ways that let officers do their job and without alienating people.

Students had the chance to try new things in production of the videos.

“This is my first time working on a 360 video, and it is a fantastic chance to work on a large set with lots of people,” set decorator Evan Gilland, an Honors Tutorial College student in the School of Film, said.

Assistant sound specialist Gokul Prasath, a graduate student in the School of Film, said sound makes up 50% of the movie and shooting uptown near a brick road with cars crossing makes a difference in sound.

Prasath, who is from India, said he has learned more about racism and the way that Blacks have been treated.

“Every single one of us are taking away a huge chunk of lessons and feedbacks from every single day of shooting,” Prasath said.

Grip and production assistant Chase Goodwin, a graduate student in the Scripps College master of fine arts program, said the project takes a lot of planning with experts in each department and grant funding. There is a lot of communication and trying to work well between departments.

“Everyone here from undergraduates to graduates to professors are all working as a unit,” Goodwin said.

The project takes collaboration, patience, creativity and listening to everyone’s perspectives, behind-the-scenes photographer Megan Westervelt, a graduate student in the Scripps College MFA program, said. She shoots all aspects of the project such as costumers, set designers and the cast.

“It feels really empowering to be part of a project that could make a really big difference for law enforcement in this area, perhaps even across the state,” Westervelt said.

Crews recorded multiple scenarios in different locations, including at Stuart’s Opera House in Nelsonville and near the graffiti wall in Athens.

Malawista said planning began around a year ago to decide what kind of elements they wanted to include in the stories. One scenario had a person with mental health issues. They did one version where the information was not gathered properly and then did another version where the situation was handled in a better way.

“We hope that our communities are encouraged that we’re taking the step to conduct the training and can be proud of us for working on an important issue like this,” Ohio University Police Lt. Tim Ryan said.

There is more to the project than just shooting scenes. GRID Lab virtual reality producer Alec Hillyer oversees much of the project’s business side. He said there are several challenges such as getting permission and rights, figuring out where they are allowed to record, knowing how much is in the budget and what they have money for. They also have to check the weather ahead of time to make sure it is not too sunny or rainy.

“It’s a lot of decision-making before we even turn a camera on,” Hillyer said.

COVID-19 guidelines also present challenges for the project. Associate producer and health and safety coordinator Graham Holford, a graduate student in the School of Film, has people tell him their vaccination status and makes sure they test negative for COVID-19. He takes temperatures on set and monitors people to make sure they have no symptoms. People also come to him if they do not feel well.

“There’s a whole new wing of arrangements that need to be made because of the pandemic,” Holford said.

Williams said they did two weeks of production and will spend two months on post-production before the project is ready to be distributed by fall. When complete, the video will be available to Appalachian law enforcement departments for training purposes and could eventually be distributed more broadly.

Ryan said he hopes the training will help law enforcement to think more critically about de-escalation and other topics covered. The virtual reality environment lets officers identify important factors, and they can decide how they would act in particular situations. In normal training officers have to make decisions such as whether or not they will use force.

“We hope that this different perspective for this training puts the officer in a position that gives them more time and space to think about those issues,” Ryan said.