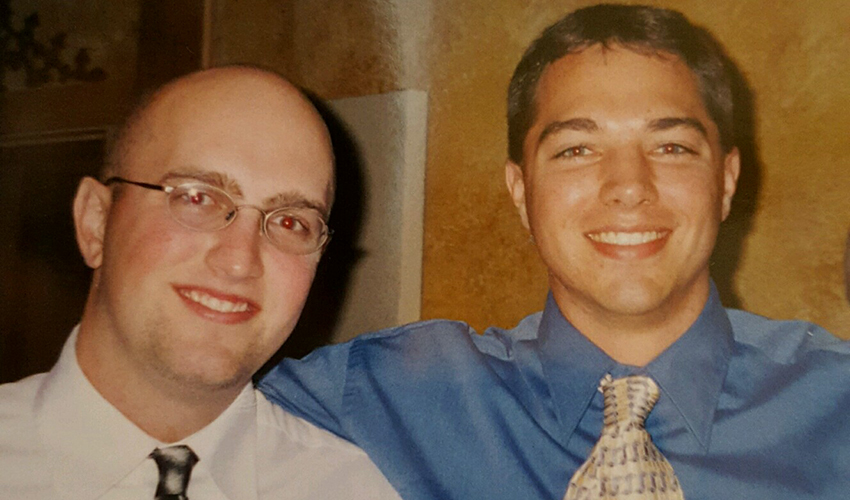 Photo courtesy of Mike Medley Ohio University graduates (from left) Mike Medley, BSEE ’01, and Matt Good, BSME ’02, have teamed up with student Daniel Abdelsamed to design, build, program and test a phone system that transcribes conversations in real time – and without anyone listening in.

As a patent attorney, Ohio University graduate Mike Medley, BSEE ’01, has drafted and prosecuted hundreds of patent applications. But in recent months, he has been pursuing some patents of his own, collaborating with two fellow Bobcats to develop a device that transcribes phone conversations in real time—all to help individuals with hearing impairments better connect with their loved ones.

“People are living longer and longer, but your hearing doesn’t get better as you age,” said Medley, founder of and partner at Medley, Behrens & Lewis LLC, an intellectual property law firm based in Independence, Ohio.

That reality hit home for Medley when phone conversations with his grandmother, who was in her 90s and living in a long-term care facility, were becoming increasingly difficult.

Medley began exploring his options and discovered CapTel phones, which provided closed captioning of phone conversations for those who are hearing impaired. What he also discovered is that those phone systems route the phone calls through a third party, which listens in on the conversation and then transcribes it.

“It’s kind of invasive from a privacy standpoint, and it’s slow,” he said. “It’s hard to communicate with someone that is a second behind. … It’s not a great setup for elderly individuals like my grandmother.”

Given his background as an engineer and a registered patent attorney, Medley thought he could build something better and provide a service that would become needed even more as the COVID-19 pandemic left many elderly individuals with the phone as their primary connection to their loved ones.

Medley immediately turned to his Ohio University connections. He reached out to fellow Russ College of Engineering and Technology alumnus and friend Matt Good, BSME ’02, to help with the mechanical design of the device and to Russ College Dean Emeritus and Professor Emeritus Dennis Irwin to see if there was an OHIO student who could assist with the device’s programming. Irwin worked with Russ College Dean Mei Wei and a faculty member to connect Medley with Daniel Abdelsamed, a rising senior from Granville, Ohio, majoring in computer science at OHIO.

“I really enjoyed my time at OU,” Medley said. “Matt is a good friend of mine, and the Russ College did a good job of preparing me to work in the engineering field. Because of that, I wanted to give a student there the opportunity to make a little bit of money and work on something that would be a fun project, and I’ve really enjoyed collaborating with Daniel.”

For more than a year now, Medley, Good and Abdelsamed have been working together remotely, designing, building, programming and testing a phone system that transcribes conversations in real time – and without anyone listening in.

Good is the owner of and a mechanical engineer at RMG Engineering and Design Services in the Baltimore, Maryland area, and has experience taking products from an idea to basic production. He worked with Abdelsamed on the device’s user interface and has been planning its path to production, talking with and demoing the device for potential users and building a website and social media presence for the device in anticipation of taking it to market.

Abdelsamed spearheaded the creation of the device’s software and user interface, as well as designing and building its infrastructure.

“I definitely knew I wanted to be a part of this project both to expand my knowledge and to expand my resume,” said Abdelsamed, who three years ago founded and serves as a developer at A-Squared Digital, a full-service digital strategy agency that focuses on application development.

In the past couple of months, the trio has finished its work on a fully functioning prototype of the device and is expecting approval on three patents they have filed for it. Before moving forward to full production, which is a costly endeavor, Medley and Good are taking steps to ensure there is a market for the device, leveraging its website and social media presence to do some SEO-based advertising and research, to monitor traffic to the sites and possibly to take pre-orders.

“Working on this project not only gave me a lot of experience in this field but also on a large-scale project,” said Abdelsamed. “I was also privileged to have Mike as a patent lawyer, so I had an opportunity to be part of the patent process and to have a patent signed. That’s going to be huge in terms of putting me forward in the field. It’s like having a seal of approval from the government.”

And, Abdelsamed added, working with successful alumni who were Ohio University students like him not so long ago has made him even more optimistic about the next steps in his life. “I can see the future’s bright,” he said.

“I love Ohio University,” Good said. “I had a great time there, met a lot of great friends, and being able to work with Mike, a friend, and Daniel, among the next generation of Ohio University alumni, has been great.”

For Medley, the work he is doing with his Bobcat brethren is an opportunity to continue building those OHIO connections while helping to make life better for others.

“It would be nice to be able to get this device into assisted living facilities and into the hands of those who could benefit from this type of technology,” Medley said.