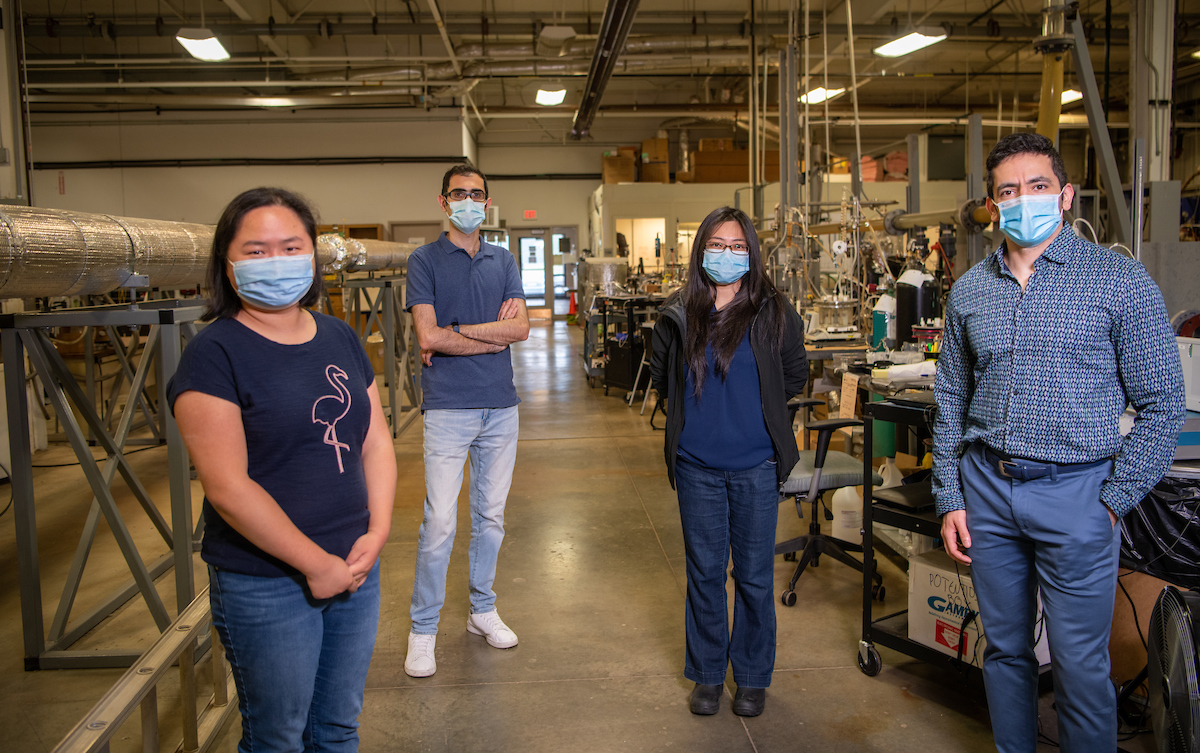 Five Ph.D. students from the Russ College of Engineering and Technology received prestigious awards at the 2021 Association for Materials Protection and Performance (AMPP) Conference for their research on corrosion.

According to the National Association of Corrosion Engineers (NACE), AMPP has more than 40,000 members in 130 countries. The 2021 AMPP Conference was virtual because of COVID-19.

“In AMPP Corrosion 2021, Ohio University has the largest number of students who won the student poster awards, which is a very good advertisement and praise for our Ohio University,” Wang said.

Wang said there were 60 student posters that came from numerous international universities. There were peer judges who evaluated the posters by clarity, the innovation of the research, its impact on the corrosion community, and the story’s logic. There were also individual interviews with several judges for students to present their work and answer the judges’ questions. The best student posters were selected after the evaluation process.

Wang said the award helped increase her confidence with her current corrosion inhibitor research and encourages her to keep going forward in the corrosion engineering field.

Sharifi said he tried to make a clear poster about his research and tried to present it in a clear and concise way to the judges.

Ma’s poster was about constructing a corrosion model that could predict corrosion behavior, and the model’s prediction is based on surface speciation calculation. She said her award is a sign that her work has value in both academics and industry.

“More people get to know me and Ohio University through this award,” Ma said.

Madani Sani said the NACE Foundation gives the Graduate Student Book Award in the amount of $1,500 to help students develop their corrosion libraries. He joined Ohio University’s Institute for Corrosion and Multiphase Technology (ICMT) in 2017 and started his PhD project on the effect of salt concentration on carbon dioxide/hydrogen sulfide carbon steel corrosion. He became an AMPP student member in 2015 and has written and reviewed multiple papers and presentations. He became the chair of the AMPP Ohio University Student Section in 2019.

“As a senior Ph.D. student at ICMT, I contributed directly to the research of one undergraduate and two Ph.D. students,” he said.

Madani Sani said his award will help him develop his corrosion library. He said could not have gotten his award without support from ICMT members.

“This award helped ICMT and in a larger picture Ohio University to be recognized for the extraordinary efforts and achievements of its members who have done so much to make an impact in the world of corrosion science,” he said.

The East Asia and Pacific Area Young Scholar Award earned by Li is a new $1,500 scholarship awarded by the NACE Foundation on behalf of the Chinese Society for Corrosion and Protection.

Li believes that winning the award will make more students pay attention to it.

Research Professor David Young said the awards are important for the students in terms of personal recognition of their research and excellence.

“That reflects on the reputation of the Corrosion Institute at Ohio University,” Young said.

Young, who also serves as assistant director for academic affairs within the ICMT, said that all graduate students affiliated with the ICMT perform research that seeks to understand the phenomena involved with corrosion. Corrosion refers to metal breaking down because of a chemical reaction with the environment.

“Corrosion is the 800-pound gorilla in the room for industry, and society, that is too frequently ignored, despite costing our economy $1 trillion annually,” Young said.

“Their awards are an exceptional haul for a single university.”

Nesic, an Ohio University distinguished professor who serves as ICMT director, said students know getting good grades and awards are important for everybody.

“It is a mechanism where someone finds out that what they do is important and valuable for other people,” Nesic said. “This is particularly significant when you go to a big conference like this one, which is the largest international conference in our field.”

The AMPP also awarded the ICMT the NACE International 2021 Distinguished Organization Award for its outstanding contributions to corrosion science or engineering over a sustained period of time. The ICMT operates within the Russ College of Engineering and Technology.