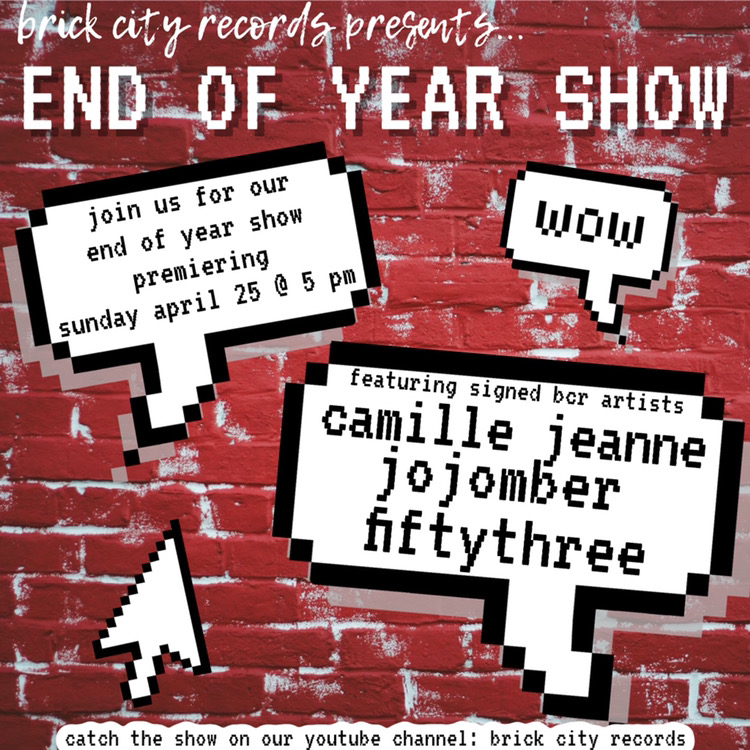 The students of Ohio University’s Brick City Records (BCR) have made the most of their time during the COVID-19 pandemic. The student-run record label in the School of Media Arts and Studies, taken as a capstone for music production and recording industry seniors, has rolled with the punches this year to help the Athens music scene live on despite the pandemic shutdowns. They will celebrate with an end-of-year show airing on YouTube April 25 at 5 p.m.

BRC provides recording, promotions, distribution, publicity, and other label services to a number of signed artists each year. Through the record label, students are given a taste of what a career in the music industry will be like after leaving the University.

Samantha Rainey, marketing and publicity head and A&R representative for Brick City artist Sun Boats, said her experience provided her with different perspectives on how a label functions and what her future might be in the music industry.

“I gained a lot of insight to the challenges of working on a large team, making sure everyone's voice is heard, and everyone feels appreciated,” Rainey said.

“I've learned a lot about what it takes to succeed in a leadership position,” he said. “There's much more to being a leader than I may have realized. You often have to bend in certain places and stiffen in others and I don't think I would've had this kind of learning experience anywhere else.”

Lynch said the BCR team overcame additional challenges brought on by the pandemic. The capstone was entirely virtual this year. Where there would usually be live shows throughout the year, all shows were virtually livestreamed instead, something the label had no previous experience with.

“We weren’t able to physically be in the studio as much as I wanted to, due to strict COVID guidelines, so it was a lot of working from home,” Lynch said. “The production team leaders and I would keep in touch to make sure everything was running smoothly. They pulled a lot of the weight this semester.”

A select number of students were able to be in the studios following the guidelines provided by the school, which allowed the record label to continue making music despite the pandemic.

“It's really rewarding to look back at everything we have been able to accomplish this year under unique restrictions,” Rainey said. “New merch, live streams, and even some live performances. We really have a lot to be proud of and I think in a way, some of our restrictions gave the label so much room for new opportunity.”

Production head Reese Clutter said his team was limited to three hours of recording in the studio, but that the group worked together well. It was a learning process, but the seniors agree it was well worth it.

Lynch and Rainey said the quality of the label’s artists also contributed to a successful year.

“JoJomber really killed it this year,” Lynch said. “His EP is so cool, you're going to be hearing that kid's name in some big stuff one day. Camille is very talented as well. I'm excited to see what the future holds for her as well.”

Rainey praised the charisma of the group she represents.

“Everyone on the Sun Boats team is so knowledgeable, friendly, and receptive, especially while working remotely. Sun Boats are just so talented, we really all wanted the best for them. Working with Sun Boats themselves was so much fun.”

Clutter said all the artists did “fantastic” considering the limitations in place and hopes they continue to put out projects “of the same or even better caliber” in the future.

The BCR end-of-year show will be released on YouTube on April 25 at 5 p.m.