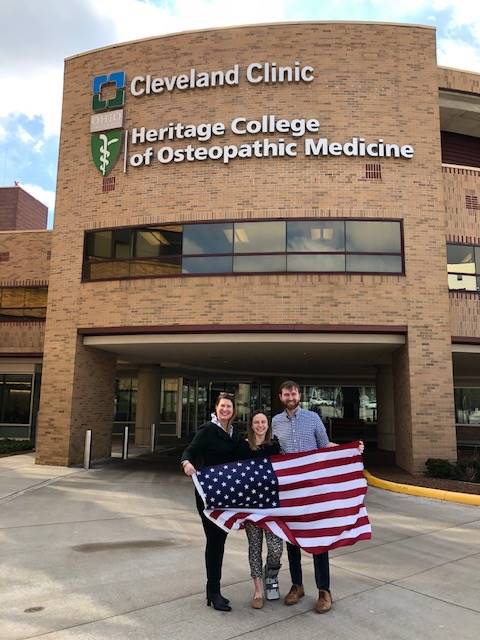 Imagine returning from combat overseas and feeling unrecognized for your service, or unable to obtain the necessary support and resources to deal with trauma or health conditions. Unfortunately, this is the reality for many women serving in the military.

With a goal of improving the health and well-being for this often under-researched population, Rosellen Roche, M.D., Ph.D., associate professor of primary care at the Ohio University Heritage College of Osteopathic Medicine, has dedicated herself to researching the experiences of women in the military. Roche served as principal investigator on two studies focusing on women in the military, neither of which were sponsored by the military. One study looks at how women in the military exposed to combat have banded together to form their own support networks, and the other looks at the role that serving in military leadership as a woman has on mental health.

The CSTs are made up of a band of female soldiers who began serving side-by-side with all-male combat units prior to the repeal of the combat exclusion policy in 2015. In this pilot study, the researchers explored and highlighted the definitions of combat, and the difficulties and health concerns these women, many of whom still work in high-risk occupations, face. What was particularly important about this study was that Roche worked with several CSTs to focus on questions that were most important to them in a participant-centered approach. Roche and the research team then received permission from the CSTs to distribute an online survey to other CST members through a social media platform used exclusively by CSTs.

“In our pilot study, we examined the ways that these remarkable women have banded together to form their own support networks as female veterans who experienced combat, and what about their experiences are important to them,” Roche said. “During the time many of these women served, women were not able to be assigned to combat roles, yet these women were integrated into combat units and went on the same missions and patrols as their male counterparts. In this research we were able to explore how some of women of the CSTs experienced combat and violence, and how their combat experience fit within combat criteria such as the Millennium Cohort Definition of Combat, and the more exacting criteria for the Combat Action Badge.”

About a sixth of the women who used the platform responded anonymously to the survey. By allowing all responses to be kept anonymous, something that the CSTs felt was critical for the group to feel comfortable participating in the survey, Roche and her team were also able to investigate sensitive topics such as discrimination, mental health, and gender-based violence, in addition to feelings surrounding their time on deployment.

“This was both a qualitative and quantitative study, but the qualitative responses from the participants were eye-opening in many ways. It allowed us to see the necessity in making a difference in the way these women are appreciated and seen by the military,” Manzi said.

“Part of this important research is to highlight the work and sacrifice that these women have made for the U.S. military,” Roche added. “The other component of this is to translate their experience and learn from these women how we as a professional community can best serve them. Because of a lack of female-specific military support networks, these women formed their own resilient groups. By understanding how they support each other, we can make a difference in how we as health care providers are attempting to serve them, both from a civilian and military perspective.”

Research with the women of the CSTs will be part of the Journal of Veterans Studies July 2021 Special Edition focusing on patriotism.

In a second study, Roche and two student researchers at the Heritage College, Cleveland – fourth-year medical student U.S. Army Capt. Katelyn Bard and Manzi – have also employed social media groups as a way to connect with female military officers and to learn more about how their dual roles of serving in the military and caring for their families affect their mental health.

“This study is important because as a female military officer before medical school, there was often an unspoken dynamic my female peers and I would have to navigate,” Bard said. “There are numerous social veteran organizations that aren't as welcoming to female military members, and we wanted to better understand the self-started online groups where women find support.”

The research team distributed an online survey through a women’s Army officer mentorship Facebook group, which serves as an online support network for junior officers, officers in crisis, and those navigating women's health topics while serving. This group contains more than 1,000 female military officers among its members at any given time.

“We know that in the civilian world, men and women experience mental and behavioral health challenges differently, and the approaches to screening, diagnosis and treatment may vary,” Roche said. “In the military arena, which for so long has equated soldiers with males, there is generally no distinction in their mental health protocols and initiatives between male and female soldiers.”

The researchers found through this study that the women uniformly agreed that their gender had impacted their journeys and success in the military, and that the workplace environment took a toll on their mental health. According to Roche, women in the study spoke at length about the impact their command role in the military has had on their family lives, one of their major stressors that contributed to mental health awareness.

In Roche’s study, of the 73 respondents who completed the pilot survey, 65.7% reported that they did not seek help for mental health, nor did they utilize military-sponsored support services, out of fear that a formal mental health diagnosis could impact their careers in the military. Such a concern is not rare. Other well-known studies, such as those conducted by the RAND National Defense Research Institute and those conducted with other active service members, found that service members worry about how a diagnosis of mental illness may affect their careers.

“The military and government have both stated that mental health of military members and veterans is a major policy objective and have invested significantly into expanding services. As these women have shown, these services may not be utilized as effectively as they could be. And that’s very important to know,” Roche added. “These women were expressing a concern that we have seen and read about before from other areas of the military, but this research demonstrates a valuable viewpoint coming from female Army officers.”

Findings from this research project have been presented as podium presentation at the 2020 North American Primary Care Research Group annual meeting. These findings have also been published in the Journal of Veterans Studies and the Journal of Patient Centered Research and Reviews.

“I think the findings from this study will be beneficial to other female military leaders because as we seek to better understand mental health factors within currently serving ranks, it will help my peers better understand their social and professional pressures they are experiencing and ultimately understand they are not alone in their military experience,” Bard added.

Roche focuses on the areas of community health and wellness in and around conflict zones, and in areas of economic and social deprivation. As a dual American and British citizen, Roche studied, researched, taught and worked in policy in both the UK and America. Her interest in health in the midst of conflict began with work in and around violence connected to the “Troubles” in Northern Ireland. Since that time, she has translated her many research interests for medicine and the military to explore ways to better serve populations exposed to violence and conflict.