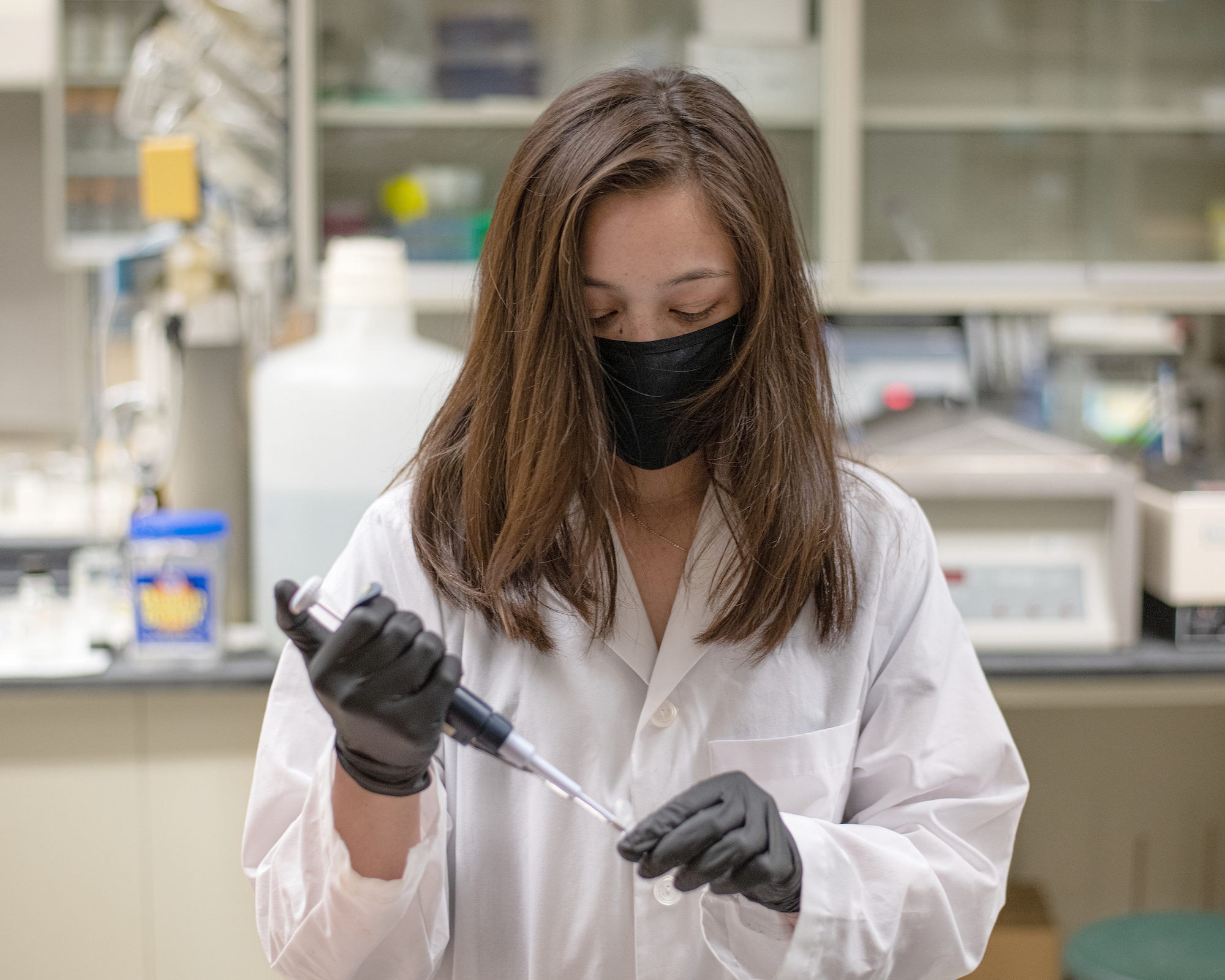 When Nicole Hess was a freshman at Ohio University, she was looking for a research project that was more human-focused. After discussing with her advisor, Dr. Soichi Tanda, he invited her to join his lab to conduct research on hearing loss.

Hess, a Honors Tutorial College junior majoring in biological sciences from Powell, Ohio, was excited to learn more and got to work right away in Tanda’s lab. Hess was recently awarded the Goldwater Scholarship for her research work.

“It was really exciting when I found out – I was so happy,” Hess said. “The past year hasn’t gone the greatest for me, between COVID-19 and other things, so it was just so good to have something positive happen. The recognition really helped build my confidence back up [about my thesis] and made me feel confident and capable [in my work].”

Her strong work in the lab does not go unnoticed.

“Whenever Nicole comes into work, I have peace of mind because she is responsible for what she does,” Tanda, associate professor of biology, said. “As the day ends, she does every single experiment or analysis correctly, so I feel very comfortable in having her in my lab because she is someone I can totally trust.”

Hess’s research includes looking at a protein complex at the base of stereocilia, a microscopic structure on the surface of hair cells in the inner ear. The protein complex is believed to help stabilize the structure, which is vital in preserving hearing function.

“When you hear a sound, you have these rows of stereocilia in your ear and they tilt back and forth,” Hess explained. “If one of these falls off, they don’t come back, so you want them to be anchored really well. The protein complexes are one of the items that helps anchor [the stereocilia] so they do not fall off.”

Hess looks at three different genes and various combinations of those genes to see how they could impact those protein complexes that help with anchoring. Each gene is looked at by a wild type (normal), heterozygous mutant (one copy of the right and one copy of the wrong), and homozygous mutant (both copies of the wrong). A combination of mutations is used to compare the reduction of hearing loss.

Hess uses mice to conduct her research, noting the structures in their ears look very similar to humans and their genes are similar as well.

“[A goal] of this project is to contribute knowledge to the field about how hearing loss works. Then later on, someone could take that information and turn it into therapeutics or other kinds of treatments for hearing loss, since it’s so prevalent, especially because treatment isn’t really that affordable for a lot of people,” Hess said.

The results so far are supportive of Hess’s hypothesis.

“So far we are getting very promising, exciting data which means she had a good perspective in terms of coming up with the hypothesis,” Tanda said.

“Hearing loss is way more impactful on society than most people think about,” Hess said. “Hearing loss is prevalent, especially in older individuals, but also in adults, children, and even newborns have hearing loss too.”

Hess is thankful for her opportunity to be a student researcher at OHIO; she turned down a full-ride scholarship elsewhere because of her advisor, Tanda.

“Once I met him, I understood how supportive he is and saw what a good community [OHIO] has. I really have to thank him for my success and my entire college career, as he’s been really fundamental in that,” Hess said.

Tanda said that Hess had a lot of positive attributes; she is diligent in her work, a hard worker, and remains very calm. One attribute he said that shines through, however, is her caring nature for people, which comes out in her role as a resident assistant.

“She has something I cannot teach. I can teach lab techniques in my lab, but I cannot really teach that kind aspect she has,” Tanda said.

Hess is one of three Goldwater Scholars for OHIO in 2021. Hess also recently received a $6,000 Student Enhancement Award, which will pay for research expenses and for her to travel to an Association for Research in Otolaryngology conference in 2022, which is the world’s largest organization for hearing and balance researchers.

Hess plans to continue her hearing loss research after she graduates, with a goal of also completing a doctorate degree.

Hess expressed gratitude for all of her mentors that have aided her in her research, including Dr. Christoher Lewis, Dr. Monica Burdick, Dr. Janet Duerr, Dr. Zhihua Hua, Michelle Pate, as well as Tanda, Berryman, Day and Thuma.