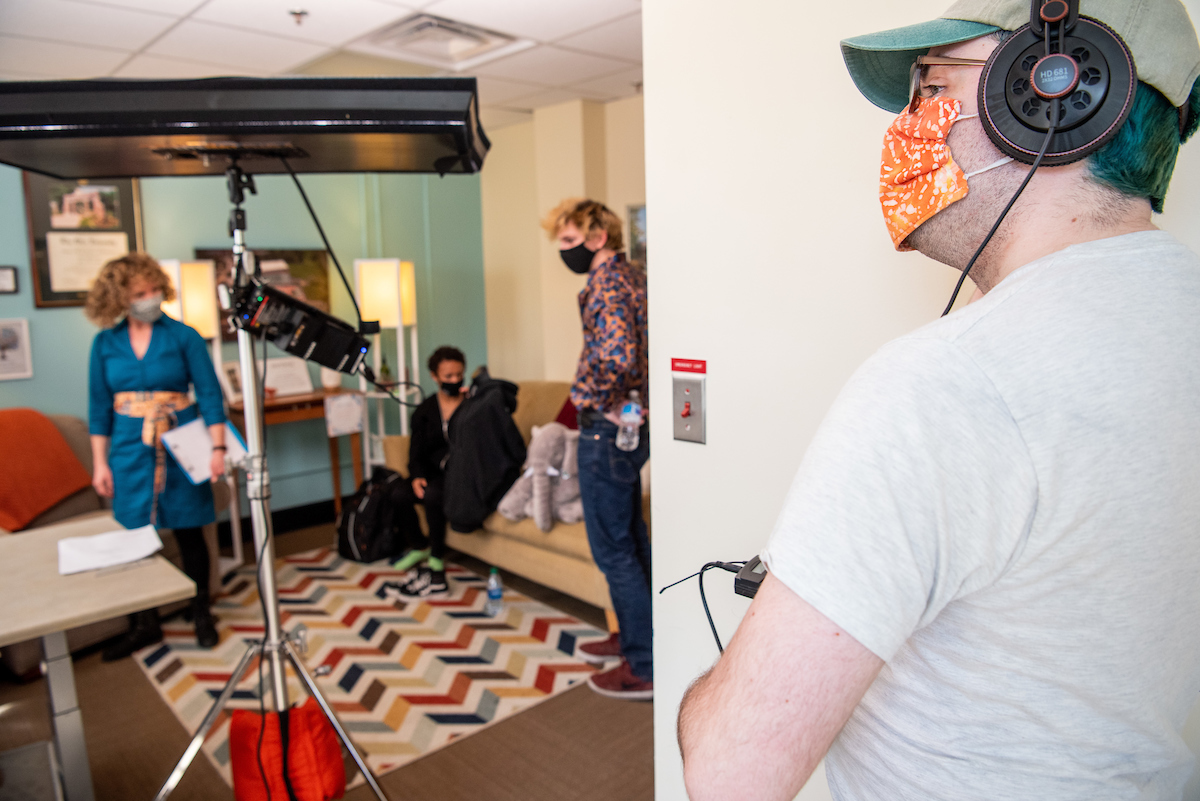 Unlike traditional television and movies, cine-VR encompasses a person’s entire field of view. Instead of looking at a flat surface, people can look up, down, left and right and still be immersed in the story.

The projects were recorded before the COVID-19 pandemic hit in Spring 2020, and editing took place for the second half of the semester. Students involved included student employees of the Game Research and Immersive Design (GRID) Lab from units across Scripps College of Communication, as well as students from the College of Fine Arts. The lab is based out of the J. Warren McClure School of Emerging Communication.

“We try to find multi-disciplinary teams for the lab whenever possible, and we try to get our students to appreciate it because that is how creative collaborations work the best. It’s a growing relationship,” John Bowditch, GRID Lab director and associate professor, said. “The students are getting an exceptional experiential learning opportunity working on these projects.”

All festival submissions of the cine-VR pieces were in professional categories, not student-based ones, going up against professionals across the world in some festivals.

“One of the GRID Lab’s philosophies is that education in the classroom only takes you so far. You’ve really got to take that education out of the classroom and put it into some sort of client-based experience,” Williams said. “We were happy to get into festivals, but when we started winning awards, it was a complete validation of these new techniques.”

Students that work in the GRID Lab developed the cine-VR experiences with a client in mind, while also being able to explore and learn different editing and filming techniques.

“I feel really lucky because one of the first books ever released about cinema VR techniques was written by my bosses that I work with every day. It’s really gratifying to work with people who are real professionals and have had a lot of experience and are writing it down for people to use for a really long time to come,” said MacKenzie Kress, a junior visual communication interactive design major from Bridgeport, W.Va., who worked on graphics for each of the four projects.

Kress’s sentiments toward the faculty members were echoed by other students who worked on the various cine-VR experiences.

“Ohio University is lucky to have faculty and funding that supports vanguard experimentation in filmmaking,” said Seth Eggenschwiller, a senior performance acting major from Dayton, Ohio, who starred in three projects. “Eric Williams, Matt and Carrie Love, and numerous other outstanding artists have brought a fascinating new art form to Athens, and I would encourage any and every student to be a part of it.”

For the Love of God is a story about a creative writer being constantly interrupted. The students edited the film to go back and forth between the writer’s thoughts and reality instead of long continuous shots. For the Love of God placed first for “Outstanding Virtual Reality Film” in the Short Sweet Film Festival in February 2021, and also placed first for “Best Virtual Reality Award” in the New York Nil Gallery International Media Festival in January 2021.

Moving In Moving On focuses on a young couple and the issues that arise as they move into their first home. To create this experience, students placed a camera in the middle of boxes, and the story plays out within “frames” of a virtual world that normally does not have frames. Moving In Moving On was also one of 60 works selected from more than 500 submissions to be shown in the New York Nil Gallery festival.

He Loves Me (not) is a loose adaption of an O. Henry short story of a love triangle. For this film, the stories cut the experience in half, so the viewer can see two different apartments depending on which way the viewer turns, with a third character running between both scenes. He Loves Me (not) won honorable mention for “Outstanding Virtual Reality Film” for the Short Sweet Film Festival in Cleveland, Ohio, in February 2021.

Lost Broken Alone tells a story of a woman trying to receive help after a tragic incident but she finds herself lost in the wilderness. For this experience, the woman is displayed in three or four different parts of the screen at a time, creating a montage that viewers have to look around to see. Lost Broken Alone was a semi-finalist for “Best use of Sound & Music in XR” in the international Real World XR Festival in Sydney, Australia, in December 2020.

Jordan Herron, who sound designed Lost Broken Alone, was a media arts graduate student at the time and now works in the GRID Lab as an immersive audio and cine-VR specialist. “I felt that these films appearing in multiple festivals was a signal that we must be on to something in a good way here at the GRID Lab,” Herron said. “I believe life has put me right where I need to be, and I am extremely honored for the opportunity to continue building relationships alongside the GRID Lab.”

Students that worked on the projects noted that they enjoyed adapting their creative process depending on the technique needed for the cine-VR piece.

“Each project is so unique and brings its own challenges and rewards. So, it is hard to stick to one process. I would say that the best thing to do is to keep an open mind and be prepared for anything and everything,” said Sammy Lahiri, a junior integrated media major from Columbus, Ohio, who worked on three of the four projects. “When it comes to VR, you just have to be flexible and adaptable.”

“My favorite part was storytelling using traditional video with the mindset that it would accompany a cine-VR experience,” said Jake Haire, a junior double majoring in integrated media and marketing from Brecksville, Ohio, who worked on Lost Broken Alone. “The GRID Lab is currently pushing the boundaries for how 360 media can be utilized narratively, which is really exciting and just to be a part of this is incredible.”

Students that worked on the projects also credited the crew and cast for an overall great experience, which helped lead to the projects’ successes.

“Working with a small crew, as I did with all of my cine-VR shoots, is so nice,” said Andy Figueroa, a senior performance acting major from Lorain, Ohio, who starred in three projects. “Cast and crew begin to recognize each other, and it makes for a very comfortable and productive work environment.”

“I’m very grateful to be working on this team because the GRID Lab at Ohio University is really pioneering the cinema VR techniques,” Kress said. “It’s nice to feel like my work is really important in making an impact in [this field].”