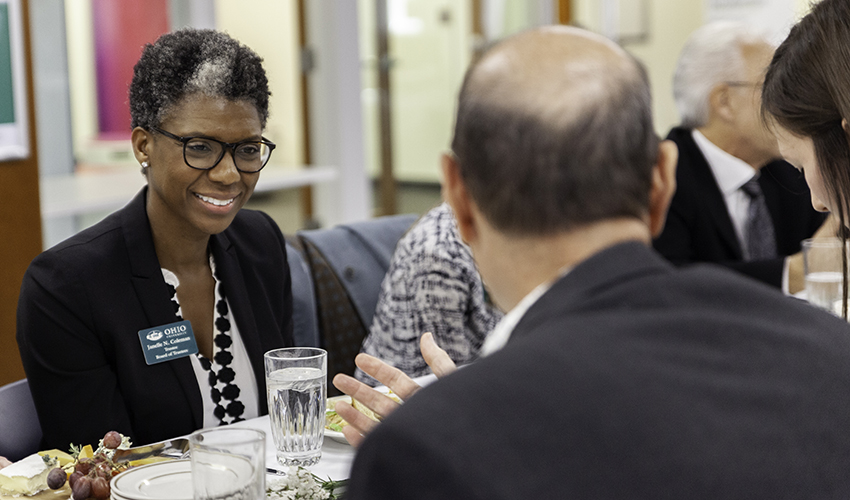 Photo by Stephen Zenner/Ohio University Libraries Janelle Coleman, BSJ ’95, was appointed to the Ohio University Board of Trustees in May 2013. Seven years later, she was elected chair of the University’s governing board.

2020 was a year none will forget, but for Ohio University alumna Janelle Coleman, BSJ ’95, it will be remembered for reaching new heights in her career and one of the highest levels of service to her alma mater.

In May, Coleman was appointed chair of the Ohio University Board of Trustees. In November, she was hired into two executive positions with one of the nation’s largest electricity producers.

At American Electric Power (AEP), Coleman is serving in a newly created position as vice president of corporate philanthropy and community engagement, leading philanthropic community outreach for the company’s 11-state service territory, and as president of the AEP Foundation.

Coleman’s path to a more than 20-year career in community engagement and corporate philanthropy began at Ohio University’s Scripps College of Communication. Originally from Cleveland, she majored in broadcast journalism in the E.W. Scripps School of Journalism and, like all Scripps College undergraduates, was required to gain hands-on experience through an internship prior to graduation. Coleman quickly discovered that, at the time, most journalism internships were unpaid.

“The reality was, I could not afford to take an unpaid internship,” Coleman said. “I was a first-generation college student, I was on Pell Grants and loans, and I worked my way through college, so it was out of the question for me to take an entire summer without getting paid. I just couldn’t do it.”

Her interest in fashion inspired Coleman to also enroll in some of the College of Business’ fashion merchandising classes, where she learned that The Limited, a Columbus-based fashion retailer now known as L Brands, was coming to campus for student interviews. Coleman’s interviews with the company landed her two internships with the retailer and a full-time job as public relations coordinator after graduation.

Coleman’s experience at The Limited ignited her passion for community relations and non-profit work, motivating her to pursue career opportunities in fundraising and development at organizations that included the United Way of Central Ohio. She returned to L Brands in 2007 to serve 12 years as vice president of community relations, chief diversity officer and president of the L Brands Foundation. Prior to joining AEP, she was the executive vice president of external affairs for the Columbus Zoo and Aquarium and its affiliated properties.

“It was definitely my internship at The Limited while I was a student at Ohio University that set me on this track,” Coleman said.

Just weeks after stepping into her new roles at AEP, Coleman sat down with her alma mater to share the keys to her success, the challenges she’s faced along the way and advice for the Bobcats following in her footsteps.

What brought you to Ohio University?

The journalism school brought me to Ohio University. I knew I wanted to major in journalism when I was in high school. I had done a little bit of research on journalism schools, and at that time, I think USC was No. 1, and I wasn’t going to school out of state. No. 2 was Ohio University. So, I applied, and I got in, thankfully, but that’s what brought me to OU. And as a matter of fact, I never got a chance to visit campus, so my first time coming to Athens was my first day on campus when my mother dropped me off to go to school. But it was wonderful. I had a great experience.

2020 saw you attain new roles at AEP and as the chair of Ohio University’s Board of Trustees. What would you say is the key to your success, and what role did Ohio University play in that?

One, I’m a hard worker. It was instilled in me from a very young age to work hard and to do my best, and so I’ve always tried to do that. I try not to take for granted where I am because it doesn’t always have to be that way, and so I just continue to work hard to achieve my goals.

I have always been very interested in people and people’s stories; I think they’re fascinating. I think that curiosity—of why someone is doing what they’re doing or saying what they’re saying or going through what they’re going through—and really trying to listen and get that input and make that input a part of whatever it is I’m doing or whatever decision I’m being faced with is really important to me. And I think it has definitely contributed to my success, trying to create places and spaces where people can have a voice and their voice can be heard and using that input to the best of my ability to reach a decision that is going to benefit everyone involved. And I really believe that my experience and education through Ohio University, and particularly the journalism school, has helped me really shape that perspective and use it in everything that I do.

What is the most significant challenge you’ve faced, and what did you take away from that in terms of your professional success and personal happiness?

Oh, wow. I think I told this story in a roundabout way when I took over as chair. So, my father passed away suddenly from a heart attack when he was 37 years old. I’m the youngest of three, so my mom went from being a married working woman in her 30s with three kids to being a widow with three kids. He was the breadwinner of the family, so we went from being a working-class family to poor, overnight. And it remained that way for quite a while.

We went through some significant challenges, but when you’re in it, and especially when you’re in it as a young person, you just sort of do what you’ve got to do. You stick together with your family, and you keep moving forward. It’s interesting because it’s your story and it’s what you went through, and you just do it, and you keep working, and you have people that help you along the way for sure and help open doors and create opportunities for you, and you try to do the best you can with those opportunities.

Looking back, and especially as I’ve gotten older and I’ve told people some of the things that we went through after my father died, they ask, “How did you… what are you even doing here? You’re not supposed to be…” And you think, “Wait, why wouldn’t I be here?” Because in their mind, the challenges are almost insurmountable. I think being able to build that resilience over time has really helped me, and then recognizing that it was resiliency, which definitely stemmed from my mother and how she approached things. But, you build that into yourself as a character trait, and I’ve gone through a lot of tough things, but I’m thankful that I have resilience and that I can look at things and say, “You know, if I got through that, I can probably get through this.” And that has continued to help me. Even at times of really great angst and strife when things are just not going really well, I think about that and I think, “You’re going to be able to get to the other side just because you’ve gotten on the other side of things that were so much more tough than what you’re facing.”

When you look back, what are you most proud of?

Definitely my career. My career trajectory, I’m really proud of that. I’m proud of the person that I have become. I really like myself. I’ve got great friends, a great family, and I’ve figured out a way to not only have a great career but also give back, which is really important to me. As I stated earlier, there were a lot of people who helped me along the way and encouraged me and helped open doors for me, and they didn’t have to. So, I really try to keep that in mind and do the same for others and try to be an encouraging person, an encouraging force—however I can—to uplift other people.

What advice would you give to the Bobcats following in your footsteps?

I think oftentimes people, especially people who are high achievers, they have in their mind what they want to do. They have a plan, and when that plan doesn’t go as expected, they may have a tendency to go inward and try to figure it out on their own. My advice is: Don’t do that. Seek out some help, talk it through, try to figure out some alternatives because oftentimes we all have plans and they just don’t pan out. And that doesn’t mean it’s a failure—it just means you’re doing something different. I think that’s the biggest thing, just ask for help, be nimble, and don’t beat yourself up if something doesn’t work out. Something else could be right around the corner that is bigger and better, and you just have to keep your eyes open for those other opportunities.

Tags:
Board of Trustees
Scripps College of Communication
College of Business
alumni