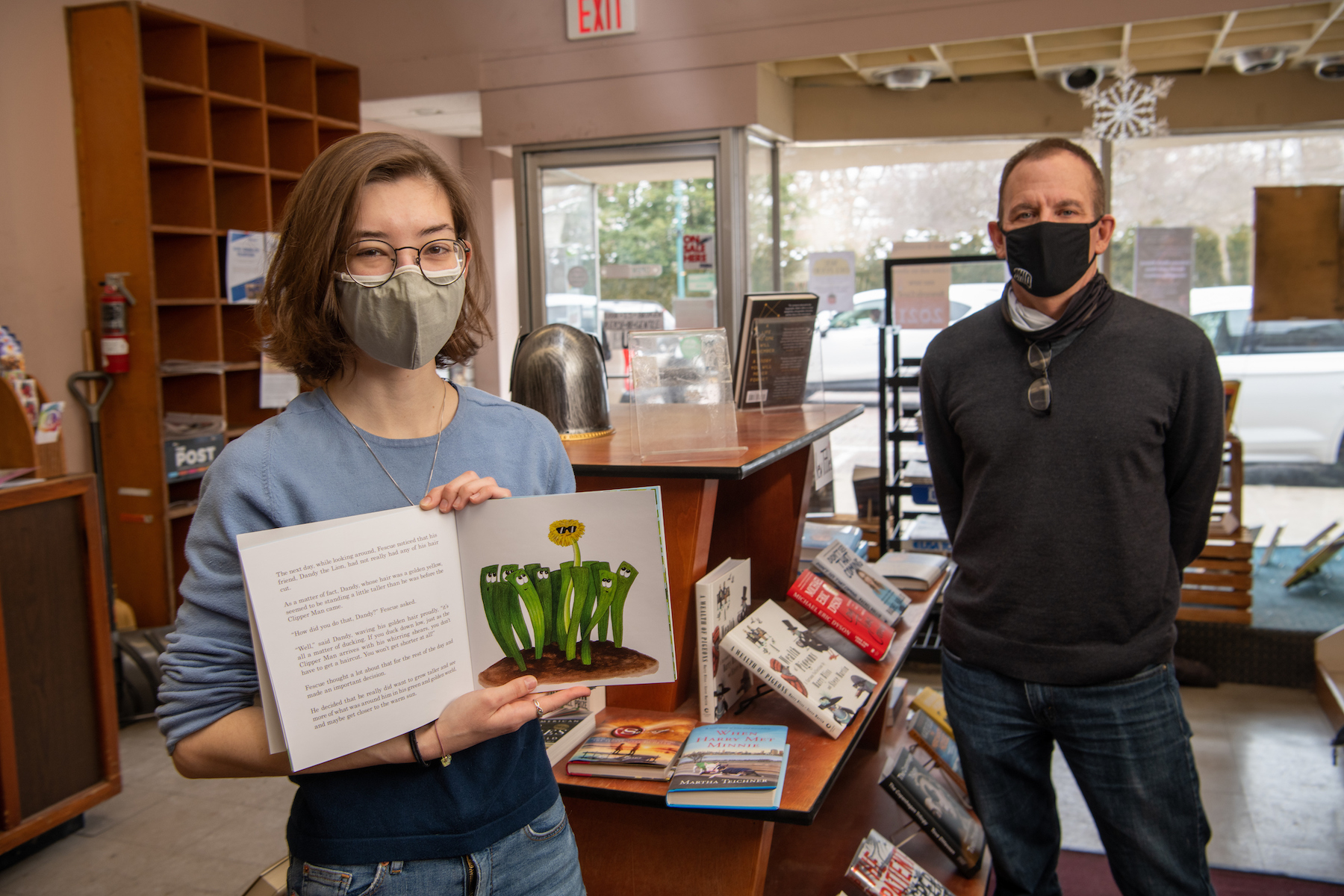 Professor David LaPalombara fondly recalls the exciting stories his father, Joseph, would tell his three children on long car rides. Fascinating tales with dynamic characters, the children would listen intently as they traveled to their destination.

“When we were kids on long car trips, usually to Maine, we would be bored and ask him to tell us a story and he’d make up these crazy stories. And Fescue was one of them,” LaPalombara said.

Fescue is a blade of grass who yearns to see above the horizon. With help from Dandy, a courageous dandelion, he takes a leap and dares to be different.

When David was in high school, his father typed up a manuscript of Fescue’s story, which he gave to his children.

“I kept the story with the idea that someday I’m going to figure out how to get this thing illustrated,” LaPalombara explained.

LaPalombara, now a professor of painting and drawing in the College of Fine Arts, recently collaborated with an Ohio University senior to make the imaginary family story come to life on paper.

During her first year at Ohio University, Callie Smith took a foundations studio art course, Image + Design, with LaPalombara. Smith, a studio art major in the School of Art + Design who concentrates on painting and drawing, is also a student in the Honors Tutorial College.

A requisite of the Honors Tutorial College is to complete a tutorial seminar with a professor. These independent studies are intended for the student and professor to have creative control of the topic they want to explore. Smith thought of LaPalombara for the tutorial, and the professor, who already was familiar with the student’s work, eagerly accepted.

“I was interested in doing a tutorial focused on illustration and exploring that as a possible career path,” she noted.

As the two discussed the concept for their tutorial, LaPalombara recalled the “Fescue” manuscript. He called his father, a Yale University professor emeritus of political science, to get permission to illustrate the story.

“Let’s be ambitious and imagine that the end goal is to get this thing (“Fescue”) published. So, do I have your permission?” LaPalombara asked. “And he said yes.”

The work had just begun for LaPalombara and Smith. At their next tutorial meeting, LaPalombara pitched the idea of illustrating “Fescue.” Smith was enthusiastic about the project and accepted.

“I really did fall in love with the story as soon as I read it. I knew that I wanted to work on the project because it’s a really sweet message,” Smith said.

LaPalombara served as the editor for the tutorial with Smith as the illustrator. They divided the story into sections and began working to interpret illustrations as Smith turned in weekly work.

Smith started by creating character sketches of the figures in “Fescue” before tackling the main page illustrations. She illustrated them by hand.

“I would do a layer of watercolor and go back in with colored pencil on top to boost the saturation of those to make them bolder and eye-catching for a younger audience,” Smith said. They would then scan the drawings into a computer and use Photoshop to clean them up.

“Fescue: A Brave Blade” is now a self-published children’s book for all ages. LaPalombara utilized Ohio University Printing Services to produce hard copies. The book can be found at Athens’ The Little Professor and is undergoing availability at Amazon.

LaPalombara and Smith began the project during the spring semester of the 2017-18 school year, and Smith is now preparing to graduate in May. The student is proud to have a book publication on her resume as she transitions to the professional world.

“She’s got some real-world experience, which is one of the great things about the Honors Tutorial College program,” LaPalombara said. “The students get to do these tutorials and explore educational opportunities.”

After graduation, Smith plans to move to New York City with friends. She will continue her studio practice and seek employment opportunities in the arts.

“I really enjoyed this project,” Smith said, “and I can definitely see myself doing similar things in the future.”