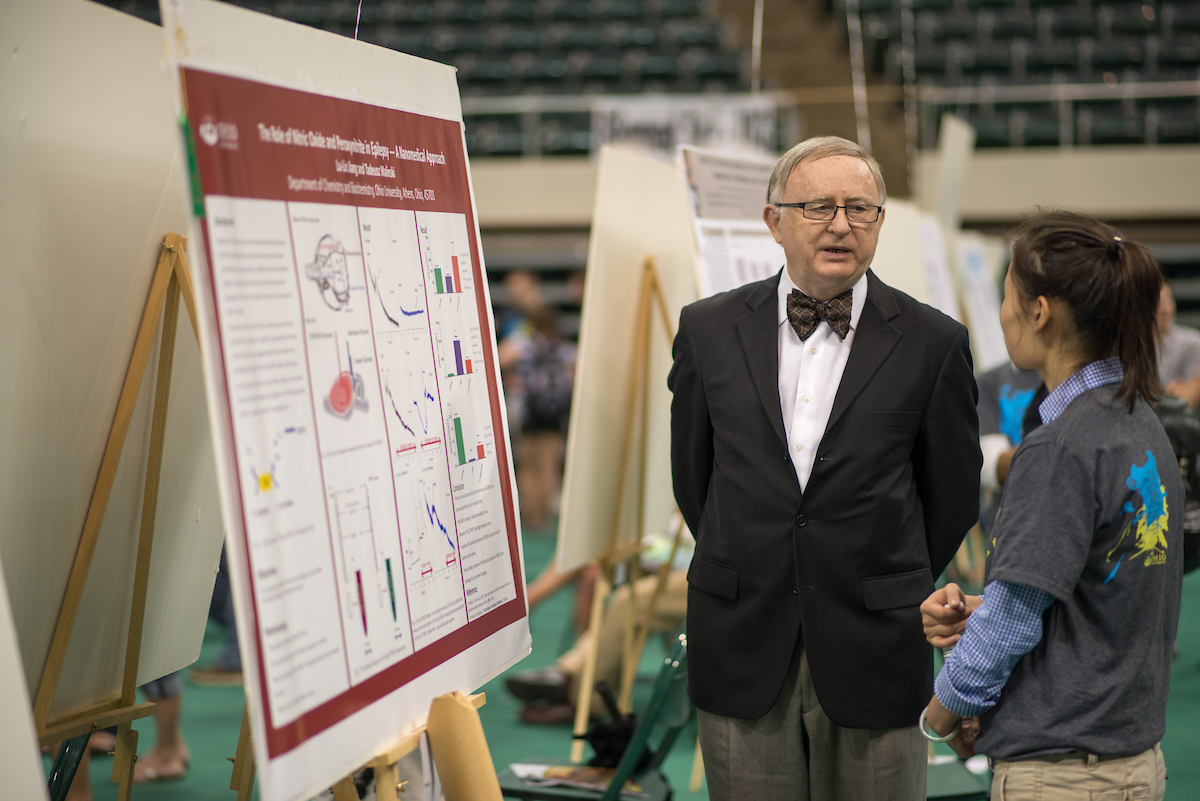 Ben Siegel/Ohio University Tadeusz Malinski of the Department of Chemistry and Biochemistry discusses research with a student on the floor of the Convo at the Student Expo in 2013.

Ohio University Distinguished Professor of Biochemistry Tadeusz Malinski has been named a fellow of the National Academy of Inventors (NAI), the organization announced.

The NAI Fellows Program highlights academic inventors who have demonstrated a spirit of innovation in creating or facilitating outstanding inventions that have made a tangible impact on quality of life, economic development and the welfare of society. Election to NAI Fellow is the highest professional distinction accorded solely to academic inventors. To date, NAI Fellows hold more than 42,700 issued U.S. patents, which have generated over 13,000 licensed technologies and companies, and created more than 36 million jobs. In addition, over $2.2 trillion in revenue has been generated based on NAI Fellow discoveries.

“Dr. Malinski’s research has far-reaching implications in the nanomedical field, a highly important field that contributes to the well-being of a broad sector of society,” Ohio University President M. Duane Nellis said. “I am pleased that Dr. Malinski has earned this recognition from the National Academy of Inventors.”

Dr. Malinski, the Marvin & Ann Dilley White Chair and Distinguished Professor of biochemistry in the College of Arts and Sciences, has been nationally and internationally recognized as a pioneer in the field of nanomedicine. He has developed new technologies and methods for the early diagnosis and treatment of cardiovascular and neurodegenerative diseases. He was the first in the world to measure nitric oxide – the “molecule of life” – in a single biological cell by employing a self-designed sensor with a diameter 700 times smaller than a single strand of hair.

Nitric oxide regulates the work of the heart and vasculature and is a messenger of information in the brain. It is key to several important discoveries, like the signaling mechanism responsible for the relaxation of the beating heart, as well as the mechanism of aging and in diseases like ALS (Lou Gehrig’s Disease) and Alzheimer’s disease and stroke. Additionally, Malinski has developed and patented new methods to reduce time of the process of healing wounds by 50 percent.

Recently, Malinski discovered the role of Vitamin D3 in the function and restoration of cardiovascular damage caused by heart attack and aging, which drew international media attention. These insights also prompted Professor Malinski to investigate how these methods could be used to assist in the fight against COVID-19. His findings suggest that the use of Vitamin D3 helps enhance efficiency of the cardiovascular system and aids in limiting the damage caused by the infection, as well as helping to slow the spread of the virus.

“Dr. Malinski is a world-renowned scientist who has made tremendous contributions to research and innovation. He is known internationally for his development of nanosensors that can measure levels of nitric oxide in the body, which has had important implications for the diagnosis and treatment of numerous cardiovascular, neurological and autoimmune disorders,” said Robert Silva, director of the Ohio University Technology Transfer Office. “His research has led to new methods for transplanting organs, treating aneurysms, reducing damage to the heart during strokes or heart attacks, and forecasting cardiovascular system problems. In addition, his lab has contributed new knowledge to our understanding of the biological mechanisms behind Alzheimer’s disease, healthy heart function, and Amyotrophic Material Sclerosis (ALS). This recognition from the National Academy of Inventors is well deserved.”

The 2020 Fellow class represents 115 research universities and governmental and non-profit research institutes worldwide. They collectively hold over 4,700 issued U.S. patents. Among the 2020 Fellows are 24 recipients of the National Academies of Sciences, Engineering, and Medicine, six recipients of the American Academy of Arts & Sciences, and two Nobel Laureates, as well as other honors and distinctions. Their collective body of research covers a range of scientific disciplines including biomedical engineering, computer engineering, materials science, and physics.

The class of Fellows will be inducted at the 2021 Fellows Induction Ceremony at the Tenth Annual Meeting of the National Academy of Inventors this June in Tampa, Florida.