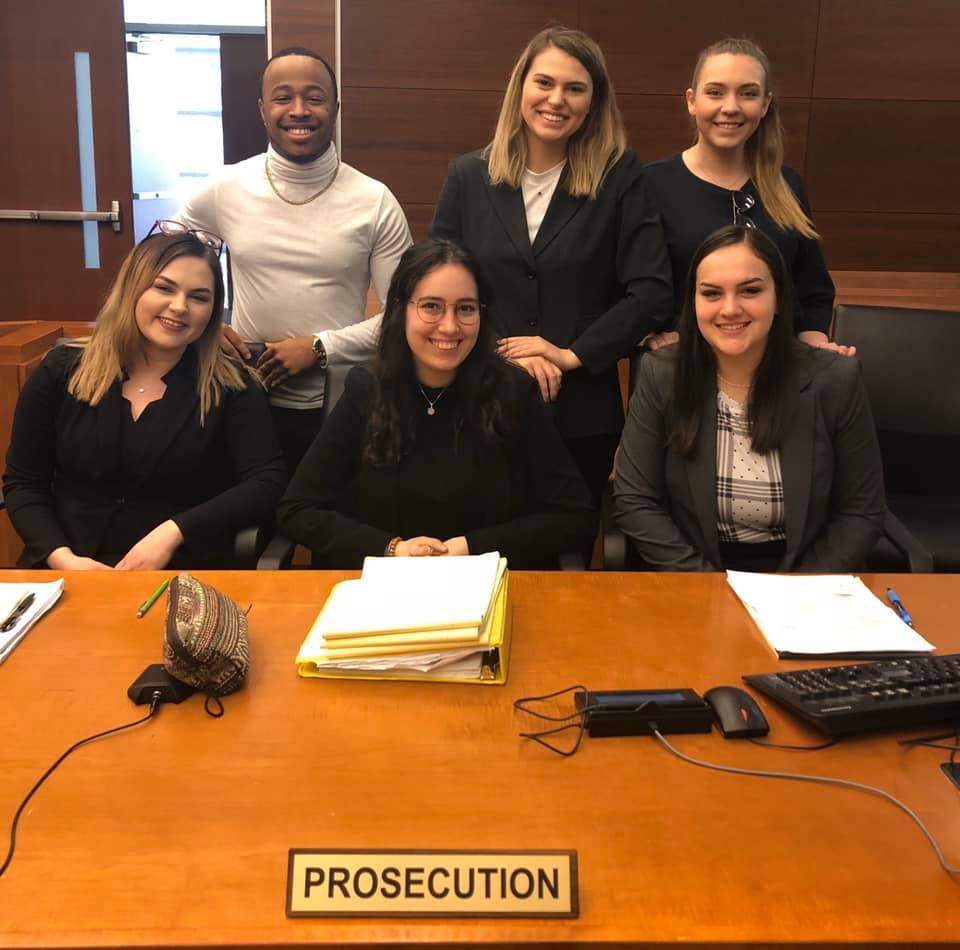 Image courtesy of Larry Hayman Students on the Ohio University mock trial team serving as the prosecution team before trial in the Franklin County Courthouse during a past event.

Micaela Beatham-Garcia, a junior studying political science pre-law, recalled her initial nerves during her first invitational with the Ohio University mock trial team in October 2019. The student had to present a defense opening statement at Ohio State University’s Scarlet and Grey Tournament. While public speaking can be intimidating for many, Beatham-Garcia said the competition ultimately was rewarding and exciting.

Now equipped with the skills learned on OHIO’s mock trial team, Beatham-Garcia plans to attend law school. She and fellow members gain experience in analysis, quick and critical thinking, and preparation of a thorough argument.

“Mock trial has not only helped me grow as a student, but just as a person in general. The support that I’ve found and the friendships that I have made through mock trial have really changed my college experience,” Beatham-Garcia said.

With the goal of giving students interested in law careers professional experiential opportunities, OHIO alumnus Larry Hayman founded the Ohio University mock trial team in 2015. The co-curricular team is run through the Center for Law, Justice & Culture in the College of Arts and Sciences.

In just a few years, Hayman has led the OHIO team to a national invitational first place finish  (see sidebar).

Hayman graduated with a bachelor’s degree in political science from Ohio University and went on to study law at The Ohio State University Moritz College of Law. While practicing election law in Columbus, Hayman was invited to teach a political science course in 2011 at his alma mater.

Hayman found that he enjoyed working with students who share a passion and interest in law so much that in 2014, after eight years in private legal practice, he joined the Center for Law, Justice & Culture as pre-law advisor. He was inspired to form the mock trial team after a number of students expressed an interest in further developing their legal knowledge and skills. Many students who participated in mock trial teams throughout high school sought similar experiences at Ohio University. Hayman thought this would provide students with foundational skills for further pursuing law.

As the director of the team during its past six competition seasons, Hayman is proud of how the program has developed.

“There is incredible personal and profession satisfaction in seeing our students succeed, and the sense of community and ownership that students have taken of the organization over the years,” Hayman said.

Mock trial experience gives students interested in legal careers access to the courtroom environment, and the ability to learn courtroom decorum, procedure and rules. However, students that compete also gain skills that will prepare them for any professional environment.

“Employers are looking for well-prepared students who are able to effectively communicate orally and in writing. Mock trial also teaches students to think quickly on their feet, manage time effectively, and become team players – a huge part of being on the mock trial team is being able to work collaboratively with each other to achieve a common goal,” Hayman said.

Ohio University alumni can also attest to the career development received from the mock trial team. Sarah Welch, Ohio University class of 2016, found that being a member of mock trial gave her an introduction to legal reasoning and forming arguments. Welch also pursued the Law, Justice & Culture Certificate Program.

After graduating from Ohio University, Welch attended the University of Chicago for law school – consistently ranked among the best law schools in the United States.

Welch found that the collaborative environment of the mock trial team helped her most in the professional atmosphere. She currently serves as a law clerk in the United States Court of Appeals for the Eleventh Circuit, working with a judge and four other clerks who she discusses cases with often.

Ellen Gill-Franks was introduced to Ohio University’s law program through the annual Summer Law & Trial Institute, also run by Hayman through the Center for Law, Justice & Culture. This program aims to give high school students from Appalachia access to legal education. Gill-Franks had high school experience in mock trial, which motivated her to find a college that provided it as well.

As a freshman, Gill-Franks tried out for the mock trial team. She was selected to compete with the invitational team and present as a witness. She later served as the secretary of the organization and was elected president in April 2020. Gill-Franks ran trial practice over the summer, and now plans the lessons for the team’s weekly meetings.

When asked why she cares about law, Gill-Franks noted that “my interest in law largely stems from the way in which society interacts with law, specifically when people are negatively impacted by law.” She is most interested in the way law intersects with politics, identity and history – and looking at the conditions surrounding a case.

One of the most meaningful aspects of the team for Gill-Franks is being a member of a strong, passionate community. “It’s really fantastic to be a part of something with members who work really hard and care so much,” she said.

The team has selected 21 students for the 2020-21 competition season. The season looks a little different, with tryouts, practices and trials all taking place virtually this year.

Other than the national invitational tournament, the team recently competed in the Justice Louis D. Brandeis Invitational, a virtual competition on Nov. 7 and 8, where Gill-Franks and three other students received honorable mentions for roles as both attorneys and witnesses, Hayman reported. The team’s next event will be the University of Illinois Champaign-Urbana’s Invitational in January in preparation for their regional tournament in February 2021.

Students interested in joining the mock trial team can participate in tryouts in the early fall semester. For more information, Larry Hayman can be reached at hayman@ohio.edu. The Center for Law, Justice & Culture is located on the ground floor of Bentley Hall. The center can be reached via 740-593-0835 or lawcenter@ohio.edu.

Twenty-four teams from across the country participated in the tournament, with Ohio University fielding two teams.

This is the first time Ohio University has won a mock trial invitational tournament. Rankings are determined by trial wins and losses, the point differential of each trial, and the calculated strength of the opposing teams. The Green Team had a record of seven wins and only one loss.

“This accomplishment is meaningful not only because it is a university milestone, but also because it rewards the entire Mock Trial program’s dedication, adaptability, and creativity. I am proud to be a team leader of such strong competitors, students, and friends,” said student Ellen Gill-Franks.

- Courtesy of College of Arts and Sciences Forum