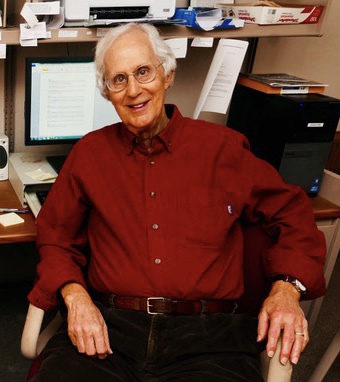 Ralph Izard, former director of the E.W. Scripps School of Journalism and longtime faculty member, died from cancer Sept. 3 at the age of 81. He served as director of the journalism school from 1986-1998 and on the faculty for 32 years before retiring in 1998.

“The entire Scripps community rises in celebration of Dr. Izard’s life,” said Scripps College of Communication Dean Scott Titsworth. “His profound impact on the advancement of the E. W. Scripps School and the college is eclipsed only by the warmth and humanity that he brought to those around him. He will be missed by all, but also remembered for the smile and positivity that he brought to every interaction with colleagues, students, and friends.”

Izard became an assistant professor of journalism at Ohio University in 1966, focusing on journalistic writing and editing. His work later expanded into journalism ethics, diversity and the First Amendment. He was author or editor of seven books and published articles in journalism and mass communication journals throughout his career.

“Dr. Izard remained a strong supporter of the school of Journalism long after his retirement in 1998,” said Eddith Dashiell, current school director. “His last publication, The Scripps School, is an anecdotal history of the J-School compiled in preparation for our centennial celebration in 2023.  (Former school director) Bob Stewart and I have repeatedly shared how Ralph Izard was a major reason why we both came to Ohio University. His death marks the end of an era in the E. W. Scripps School of Journalism. My heart is breaking.”

After retiring from OHIO, Izard served in various leadership roles at the Manship School of Mass Communication at Louisiana State University. There, he founded and served as executive director of the Media Diversity Forum, a website dedicated to diversity in the mass media and higher education.

“I am one of the fortunate people who Ralph made better just for knowing him and sharing time together,” said former school director Bob Stewart. “He didn’t set out to be a mentor. But he couldn’t help mentoring. It came naturally to him, like breathing. Ask any of his former students and colleagues and they will tell you their version of this same story.”

Surviving is his daughter, Martha of Athens. He was preceded in death by his wife, Janet, and a sister, Carolyn Jones of Rogers, AR.

A memorial service will be held at a later time. Contributions may be made to the Ralph Izard/Post Endowed Scholarship, Ohio University Foundation, Ohio University, Athens, Ohio 45701.