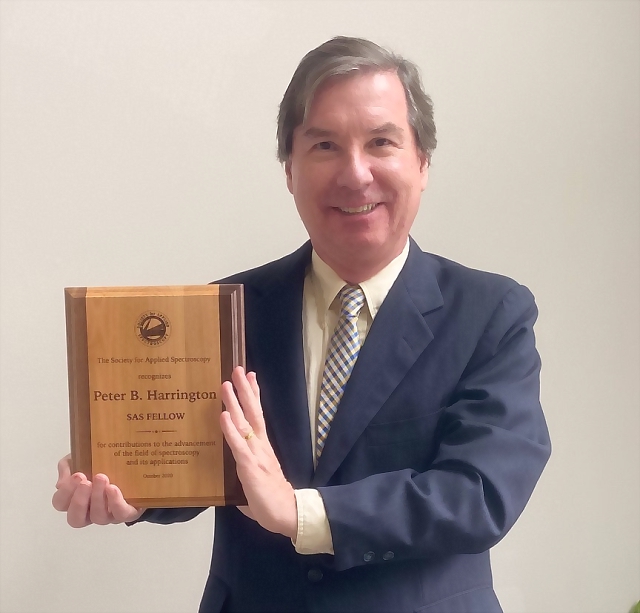 Ohio University professor of chemistry Peter Harrington will receive the 2020 Society for Applied Spectroscopy Fellow Award, as well as present two lectures on his research identifying and quantifying synthetic novel opioids and fentanyl, at this year’s virtual SciX 2020 meeting on Oct. 14.

“It’s a great honor to be included with such an outstanding group of scientists who have received this award prior to me,” Harrington said. “These scientists have inspired me and are leaders in chemistry and spectroscopy that I’ve looked up to for years. I also find it rewarding to think about how my very first paper as a graduate student was published in Applied Spectroscopy that is produced by the same society that is giving me this prestigious award.”

Harrington, the only faculty member at OHIO who is part of the society, specializes in chemometrics forensic chemistry and spectrometry – the study of matter by looking at the interaction of light with it. The SciX meeting is the second largest forensic chemistry conference in the U.S. to help advance the art and science of spectroscopy and life sciences.

In addition to Harrington receiving this prestigious award on Oct. 14, he will also present two different lectures for the SciX 2020 meeting on the same day as well – talk about a big day.

He will give a featured lecture on “A Quantitative Reliability Metric for Querying Databases” at 12:45 p.m., as well as an invited lecture at the Charles Mann Award Symposium at 8 p.m.

His lecture on “A Quantitative Reliability Metric for Querying Databases,” funded by the Houston Forensic Science Center and the National Institute of Justice, will focus on the measuring the reliability of database searches, specifically talking on his idea to develop a probability measure to identify novel synthetic opioids.

“Opioids are a growing problem due to the rise of addiction and drugs smuggled into the country,” Harrington explained. “So if we can offer insight on database search that allows us to better find matches and determine the probability as to how reliable those matches are, we can further the field of forensic chemistry, especially when presenting evidence into court: you must know the error rate of the method, and this new method will determine that error rate.”

Harrington will then later present a lecture at the Charles Mann Award Symposium for a colleague from Japan who is winning the Charles Mann Award for Applied Raman Spectroscopy, an award for outstanding contribution to Raman Spectroscopy. This lecture will highlight the work Harrington is doing with colleagues from Florida International University identifying the amount of fentanyl, an opioid that is 100 times stronger than morphine, that has been found as an adulterant in heroin and cocaine by a portable spectrometer. Their research uses a very sensitive spectroscopic instrument so that drug samples may be diluted to safe levels and reduce the risk for first responders from suffering a fatal overdose from accidental exposure.

“Surface enhanced Raman spectroscopy (SERS) provides a useful alternative to current screening procedures that permits the detection of trace levels of fentanyl in mixtures,” Harrington said. “In this project, a method for computing confidence intervals for detection and decision limits will be advocated using the uncertainty in the estimate of analytical sensitivity. Improved methods for calculating uncertainty would assist researchers in making statistical comparisons and avoid misestimating the detection limits for the drug.”

Lastly, his graduate student Zewei Chen is presenting the novel development of a self-optimizing support vector elastic net. The new method allows models for spectroscopy to be built that are stable by eliminating or attenuating non-informative measurements. It automatically optimizes two key parameters during the model-building step so that scientists without a strong background in mathematics or computer science may apply this method to their research.

Harrington has also recently published a paper in Analytical and Bioanalytical Chemistry on Metabolomic Profiling and Comparison of Major Cinnamon Species using Ultra High Performance Liquid Chromatography — High Resolution Mass Spectrometry. This work allows the metabolites associated with the nutritional benefits of cinnamon, a botanical medicine, to be ascertained.

Along with receiving the Society of Applied Spectroscopy Fellow Award, Harrington has also received the 2019 OHIO President’s Research Scholar, was named a finalist for SciX’s 2019 Innovation Award, received the 2019 EAS Award for Outstanding Achievement in Chemometrics, and OHIO’s Arts & Sciences Outstanding Faculty Research Award in 2016, among other awards.