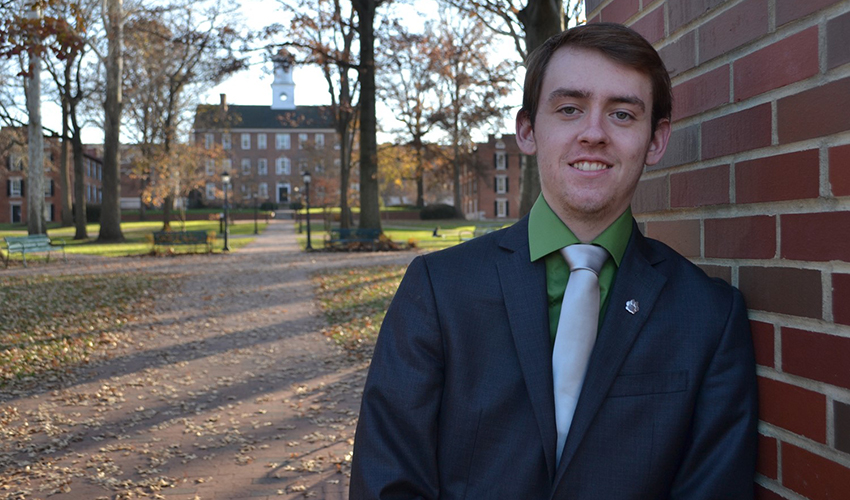 Mitchell “Mitch” Holland, BBA ’19, passed away unexpectedly in December 2019. One of his fellow College of Business graduates has created a scholarship in honor of Holland’s hard work, extreme kindness and distinguished record of service and mentorship.

The Ohio University experience isn’t just defined by what students take from it but also what they give to it and the legacy they leave behind.

When he graduated from OHIO, Mitchell “Mitch” Holland, BBA ’19, left behind a legacy of hard work, extreme kindness and a distinguished record of service and mentorship that is being memorialized and continued by one of his fellow graduates.

Bobby Gorney, BBA ’18, has established the Mitchell W. Holland Memorial Scholarship in honor of Holland, who was working as an investment analyst in Portland, Oregon, when he passed away unexpectedly in December 2019. For Gorney, it was an opportunity to continue the legacy of a mentee-turned-friend who was a source of inspiration and support to him and countless others.

“Mitch was the kind of student that was always up late studying but would always take time to sit down and talk to you,” Gorney said of Holland and their student experience in OHIO’s College of Business. “He was a mentor to a lot of students, especially during his junior and senior years. Coming into the College of Business or OU in general can be intimidating, especially for freshmen. You just want somebody to take you under their wing and show you how to do things, where to go if you need help and just offer you tips. Mitch did that for a lot of students, and a lot of students really looked up to him.”

Gorney met Holland interviewing him for acceptance into the College of Business’ Student Fixed Income Management Group. While Holland wasn’t selected for that student-run organization, he didn’t let it discourage him. The following semester, Holland reached out to Gorney, who was president of the Derivatives Management Group, for advice and guidance as he prepared to interview for that student-run organization. Holland was not only admitted to the Derivatives Management Group but was elected its vice president.

Founded in 2013, the Derivatives Management Group is one of the only student-run derivatives groups in the nation. Composed of high-achieving students from all of the College of Business’ majors, the group manages options, swaps and future portfolios, allowing students to gain valuable exposure to high-level investing.

“Everyone loved Mitch,” Gorney said. “He was super instrumental in getting the Derivatives Management Group where it is today. I don’t think it would be where it is today, or even still a group, if it wasn’t for the commitment that he had to it and wanting it to be something better than it was.”

A finance and business analytics major, Holland’s commitment to excellence extended beyond the student-run organization.

“Mitch was an amazing person and student who was an integral part of the Finance Department and Derivatives Management Group,” said Dr. Andrew Fodor, a Leona Hughes Professor of Finance and director of operations and finance in the College of Business. “His legacy will have a lasting impact on Ohio University.”

The care Holland showed to his fellow College of Business students and those who participated in the Derivatives Management Group was on full display at the celebration of life held in his honor, with many of his fellow Business Bobcats sharing how he had impacted their lives.

“Everyone wanted to talk about him in some way and remember him,” Gorney said of the Business Bobcats who attended Holland’s celebration of life. “I think that spoke volumes. All of these students told me things like, Mitch was a mentor to me, I remember when Mitch sat down and taught me this, or I was having a really rough time and Mitch helped me through it. There’s a chain effect to all of that. You help one student, especially those younger than you, and that student feels good about themselves and they pass it down.”

And while Gorney was a mentor to Holland, he learned much from him as well.

“He was a really close friend of mine,” Gorney said. “He taught me to slow down, to take a step back when needed and not let something become bigger than it really should be, and that when life knocks you down, you get back up and continue to smile. He really taught me how to enjoy life more.”

Gorney noted that he created the scholarship to pay tribute to Holland, to all the lives he made better at the College of Business, and to give back to the place that paved the way for his personal success.

“I wouldn’t be in the job or position I’m in today without everything the College of Business did for me,” said Gorney, who is an investment banking analyst with Societe Generale, a French investment bank. Gorney landed the job after interning with the bank as an OHIO student and now resides in Manhattan where he continues to connect with fellow Business Bobcats.

The Mitchell W. Holland Memorial Scholarship will benefit students in the College of Business who demonstrate financial need and who participate in the Derivatives Management Group.

“Mitch was an amazing person. He was kind, inquisitive, humble and very hard working,” said Dr. Travis Davidson, a Leona Hughes Associate Professor of Finance and chair of the Department of Finance. “This scholarship is the perfect way to ensure Mitch's giving nature is passed along to future Bobcats.”

For Holland’s family, the scholarship in Mitch’s name means a lot.

“This scholarship means so much to our family because we know how much it would mean to him and how honored he would be,” said Holland’s sister, Cori. “It is especially fitting because he was so selfless and kind, and this scholarship will help others who had similar goals to him.”

Describing him as “the big brother parents hope to have in their family,” Cori noted the many kindnesses Holland showed to her over the years. From giving her all his tickets so she could get the prizes she wanted at their summer day camp trips to Magic Mountain to taking her to get school supplies and picking her up from parties, Cori said she was blessed to call Holland her big brother and friend.

“His gestures only grew bigger as he did. You name it and he probably did it for me,” Cori said. “If you knew him, he absolutely always had your back no matter what and would always lend a helping hand to anyone who needed it. I am so grateful he will be honored in such a fitting way.”

Gorney remembers the pride he and his classmates felt as OHIO students when they were awarded scholarships.

“I would hope that the students who are awarded this scholarship, and hear about the impact Mitch made, feel good about themselves and understand that they are being awarded this scholarship because they really closely embody the characteristics Mitch had and what a great person he was,” Gorney said. “And I hope they feel the same way about themselves – that not only are they great students but even better people. A lot of times, I think that’s what matters more.”