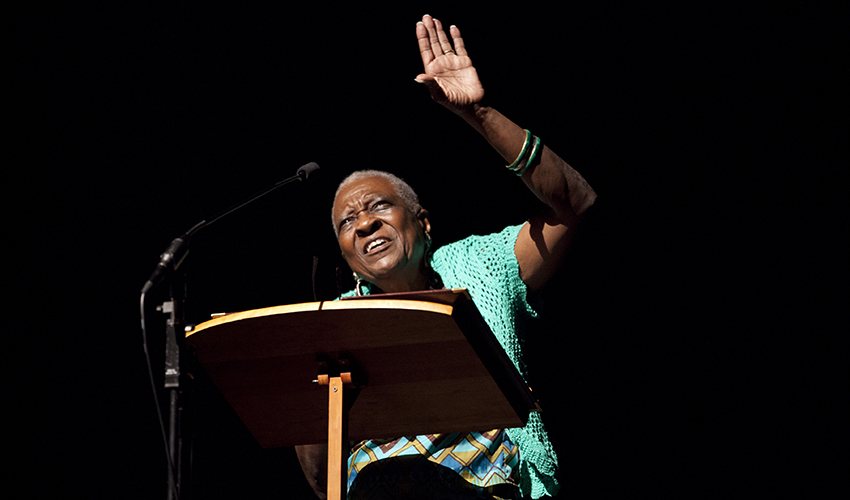 Over the course of nearly 40 years, Dr. Francine Childs, HON ’97, EMERT ’05, educated and inspired students at Ohio University, galvanizing them to stand up for their beliefs and bring positive change to their communities.

Ten years after her retirement, two of Childs’ friends and former colleagues are paving the way for future generations of students to continue her legacy while paying tribute to her place in OHIO history, her distinguished career and her passion for social justice and activism.

Drs. David Descutner and DeLysa Burnier have established the Rev. Dr. Francine C. Childs Social Justice Scholarship Endowment, which will benefit students in OHIO’s College of Arts and Sciences who demonstrate financial need. The scholarship gives preference to students majoring or minoring in African American Studies, the academic department that Childs served and chaired and in which she became the first Black professor to be granted tenure at Ohio University.

“Dr. Childs’ impact on students inside and outside the classroom has been profound and should be recognized,” said Descutner and Burnier, longtime OHIO educators who, along with Childs, have been honored for outstanding teaching with University Professor Awards.

Descutner, who served as a faculty member in the School of Communication Studies, as dean of University College and executive vice provost for undergraduate education, and as interim president and provost, and Burnier, a professor of political science, witnessed Childs’ impact on students before they even met her in the mid-1980s.

“We heard from our students about this remarkable, inspiring professor who connected deeply with students through her teaching and through her mentorship,” they said. “Perhaps our favorite shared memory of Dr. Childs is seeing her at public events, surrounded by students asking her questions and engaging with her and their peers on critically important social and political issues.”

Childs came to OHIO in 1974 as an associate professor, joining what is now known as the African American Studies Department. She was instrumental in the development of the department, which was established only five years before her arrival, serving over the course of her career as its curriculum chair, director of summer programs and chairperson. Within three years of her arrival, Childs became the first Black tenured professor at OHIO.

As for Childs herself, her goal was always a simple one: to empower students to create a sense of community and inspire change.

“Be compassionate, be involved in bringing about changes in the communities where they live, and impact the world,” Childs said when asked what she hoped students took away from her teachings. “To actually be the change that they wish to see.”

That “Be the change that you wish to see in the world” quote, attributed to Mahatma Gandhi, was a constant source of inspiration for Childs, who spent eight weeks in India as a Fulbright Scholar. There, she studied theories of nonviolent conflict resolution and literally walked in the footsteps of Gandhi.

“It was the experience of a lifetime,” Childs said.

It was an experience she would bring back with her to Ohio University, developing a Tier III course, “Gandhi and King: Nonviolence as Philosophy and Strategy,” that continues to touch the lives of students and countless others.

“That class may have impacted lives in a way that none of the others did,” Childs said of the course that became her passion.

In studying the lives of Mahatma Gandhi and Martin Luther King Jr., Childs encouraged her students to integrate the practice of nonviolence into real-life conflicts and to effect real change in the community. Students would raise funds and canned foods for charitable organizations, volunteer in the local schools, and practice fasting for a weekend.

“I wanted students to be able to say, ‘I had an impact on the community that I lived in,’” Childs said. “With the hopes that they would take what they were getting out of the class, because it was a senior-level class, once they left the University—that wherever they would go, that they would be like Mahatma Gandhi and be the change that they wish to see.”

Descutner and Burnier saw the impact that class had on students.

“Students in our own courses would bring up what they learned from Dr. Childs’ course about the imperatives of moral leadership and the obligation to stand up for what they believed to be right and to advocate for reform,” they said. “Her course, which sought to empower students, was really a course in how to be an engaged, responsible citizen, which is one of the great lessons any student can learn in higher education.”

Her impact was inspired not only by Gandhi and King, but also by her grandmother, a community leader in Childs’ hometown of Wellington, Texas, who instilled in her the value of community and compassion.

“Our house was the place where it seemed like people just would come and hang out and organize civic organizations and different things,” Childs said. “My grandmother, she impacted my life to such an extent that there’s not a day that passes that I don’t think about her and thank her for the seeds that she sewed into my life.”

Growing up in a small, cotton-pulling town with segregated schools, Childs watched as her grandmother organized the local NAACP and helped the less fortunate, even giving up the family’s own beds to community members whose home had been lost in a fire.

“I grew up in an atmosphere where there was a sense of community, and that you have to be the best you that you can be, and you don’t have to take second seat to nobody, that you’re as good as anybody,” Childs said. “All of those positive things that were just kind of drilled into my mind I took it everywhere I went to, every public school that I went to teach in, every college that I went to work at, and so I brought it to Ohio University.”

At OHIO, Childs set out to make meaningful changes around campus, moved by Dr. King’s words “Injustice anywhere is a threat to justice everywhere,” which she developed into her own mantra: “None of us can afford to party as long as any of us have deferred dreams.”

Childs was pivotal in the creation of the University’s Multicultural Center, the organization of a Black Faculty Caucus and the Black Student Union, and efforts to diversify the University’s faculty. And, shocked to find the University had no Black choir, she worked with her students to establish the Gospel Voices of Faith, which created not only a community but opportunities for students to travel and perform around the country.

“I was so impacted by my grandmother and Martin Luther King,” Childs said, “that I felt like I had to do everything that was within my power to try to bring about change, to try to make things better for African Americans.”

Since retiring in 2010, Childs continues to be a mentor to her former students, staying in contact with OHIO graduates around the world. This past February, family, friends and former students, several of whom were in the Gospel Voices of Faith, gathered at the Athens Community Center to celebrate her 80th birthday.

“I love teaching, and I loved my students. I just love them dearly,” Childs said.

That love—and Childs’ work—will continue in the Rev. Dr. Francine C. Childs Social Justice Scholarship Endowment, which Descutner and Burnier hope will serve as a reminder of her legacy as an educator and a moral leader.

Childs’ message to future recipients of this scholarship?

“I would hope that they, too, would be the change that they wish to see, that they would go out and impact the lives of young people, creating an atmosphere for young people to be able to learn, to grow, to be all that they can be, and to give back to their communities.”