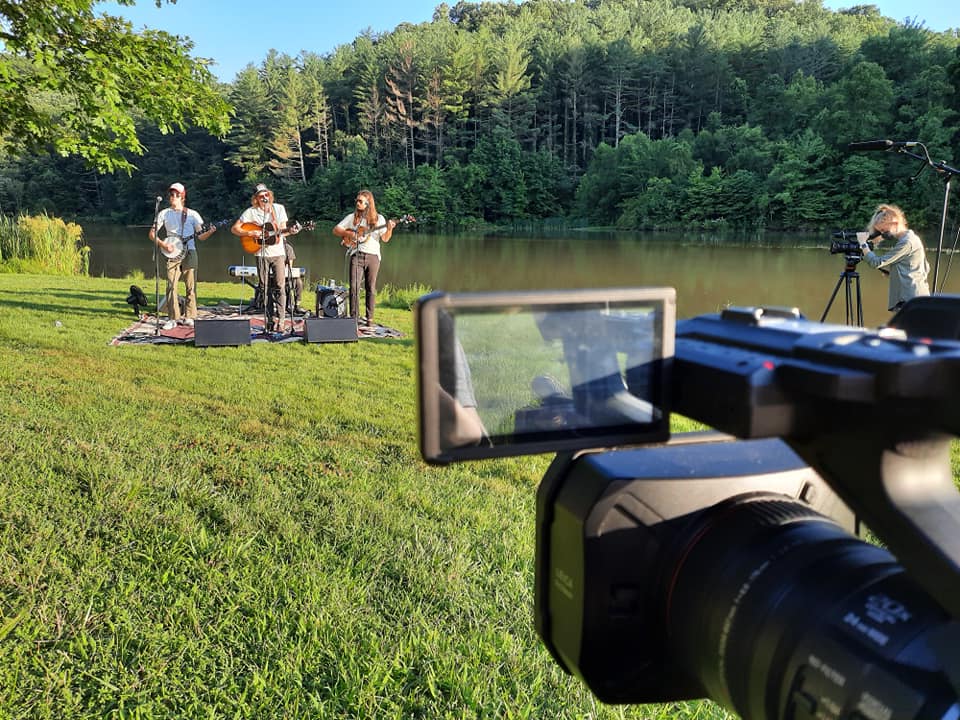 Several Ohio University students and recent graduates helped produce this year’s Virtual Nelsonville Music Festival (VNMF), allowing them to gain experience and funding in a time when most media and entertainment-centric industries are at a standstill.

VNMF, which was presented Aug. 21-22, featured 25 local, regional and national artists performing one- to five song mini-sets that were edited together to create one virtual festival. Previous Nelsonville Music Festival (NMF) performers submitted prerecorded sets from their respective locations, while a team comprised of OHIO students, recent graduates, WOUB Public Media staff and faculty worked with regional and local artists to safely film their sets across the southeastern Ohio region.

Josh Antonuccio, associate professor and director of the Scripps College of Communication’s Media Arts & Studies Program, served as executive producer for VNMF and hired a team of OHIO students and recent grads to assist in video and audio production, publicity, editing and more. School of Media Arts & Studies faculty Andie Walla and Brian Plow, along with WOUB Public Media staff Adam Rich, Evan Shaw, and Emily Votaw, made up the key leadership positions on the team to facilitate various departments through each stage of production and distribution.

“In the wake of COVID-19 we had a pretty wide swath of students and recent graduates who were affected because of their internships and jobs being wiped out,” Antonuccio said in an interview with WOUB. “We soon began brainstorming ways for the beloved Nelsonville Music Festival to find a life online while simultaneously making up for some of the missed professional opportunities the COVID-19 crisis created.”

Olivia Stefanoff, a recent Integrated Media Production graduate, and Gray Longfellow, a senior Music Production and Recording Industry major, were just two of the many individuals able to take part in producing VNMF.

“I was very honored to have been chosen to help out because I lost an internship position due to the pandemic and was finding it hard to find media production work,” Stefanoff said.

Stefanoff was one of four OHIO students on the video team who filmed the musicians performing their sets in various locations around Athens and Nelsonville, while Longfellow was part of the audio team whose primary job was setting up microphones and equipment to record the sets and ensure everything captured was clean and clear.

“It was really different doing video production during the pandemic,” Stefanoff said. “On set we wore masks the entire duration and got our temperature checked at arrival. All crew on set took precautions such as staying six feet apart and making sure the only gear we touched was our own.”

Although working in media production amid a pandemic may have been new to Stefanoff, she was more than familiar with the Nelsonville Music Festival, having first attended the festival the summer after her freshman year at OHIO and going on to do videography for various parts of the festival the following two summers.

“After first attending the festival, I knew that I wanted to help out and volunteer after seeing how much this festival impacted the music scene in Southeastern Ohio,” Stefanoff explained.

Longfellow shared a similar experience, not only learning new methods of how to record different genres of music, but also how to operate their job efficiently while maintaining social distancing and following COVID guidelines.

“Working with the VNMF crew was an amazing experience,” Longfellow said. “Everyone was extremely passionate about making each shoot the best it could possibly be and always brought their A-game. I feel that it was important to be a part of VNMF because virtual performances are likely going to be around for a long time and having the ability to learn first-hand what goes into producing virtual performances is vital as someone going into the recording side of the music industry.”

“Being able to help bring this festival to fruition virtually during the pandemic was a real honor,” Stefanoff added. “Stuart’s Opera House is such a wonderful and deserving venue that always gives back to the community and strives to showcase artists and serve as a resource for community members seeking to learn more about music.”

“I think that producing a virtual music festival is incredibly important for both the musicians and the audience in this new era we’re in because it gives musicians a space to perform even when there can't be a physical crowd,” Longfellow said. “Audiences are also given the chance to see their favorite bands and hear live music using a fairly accessible medium, allowing the musical community to connect without being physically present for a performance.”